It was a dominant night for Wissahickon, playing in front of a packed out stadium on homecoming. The Trojans gave the fans who were all decked out in white plenty to cheer about, putting up a season high 48 points after only scoring 6 points against Springfield last week. Although the score indicates that it was a 20 point game in the end, the final tally doesn’t show how good the Trojans were throughout the night. 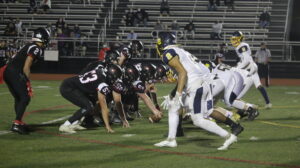 “It feels great, it’s been a little while since Wiss has won a homecoming game from what I’m told, this is my first year here. I’m happy for the kids and the alum that came back we put on a show for them” Said Coach Jim Gober, who’s the offensive coordinator, but has taken over the head coaching duties the past couple of weeks with coach Fleming unavailable.

The Trojans got a big boost from their running game, rushing for just under 300 yards in the victory. Wiss managed a measly 38 yards on the ground last week, and got bullied by Springfield’s defensive line, but tonight was a different story. The style in which the Trojans ran the ball was different tonight as well. Kyle Lehman is normally the number one back for the Trojans and the speedy junior did get his fair share tonight, but it was also Jeremiah Clark who got in on the action as well. Both split carries and were able to wear down the Lower Moreland defense with the change of pace for each back.

In the first half Lehman showed why almost every team has been keying in on him as a big weapon for the Trojans. Lehman scored two touchdowns, one for 31 yards and another for 7 which gave the Trojans a 21-0 advantage in the second quarter. Lehman broke off a 60 yard touchdown in the second half, thanks to his killer speed. The Penn State Lacrosse commit is dangerous when he gets to the second level and he makes teams pay if they don’t load the box. On the night Lehman carried the ball 15 times for 151 yards and three touchdowns, not too shabby numbers for someone who split carries all night.

Speed kills. Kyle Lehman takes it 40 yards to the end zone for his third of the game. Wiss leads 35-7 9:57 left in the third @PaFootballNews @SOLsports pic.twitter.com/xI4181dcM8

Jeremiah Clark has been battling through a high ankle sprain all season that he suffered in a scrimmage against Hatboro Horsham, which hasn’t allowed him to get reps at running back this season. The senior split carries with Lehman last year, but has been mostly used on the defensive side of the ball this year as a linebacker, but tonight he got his chance and Clark didn’t look back.

“Right now I’m still recovering actually, but I’m feeling a lot better honestly. Football is one of those sports where no matter what the situation and give it one hundred percent” Said Clark.

“It sort of just happened, Kyle’s our feature, back but JC is certainly no slouch, and based on how they were lining up it was working. You don’t often see a 3-1 box in high school football, so that tells you to hand the ball off on an inside zone and let your kids do what they’re supposed to do” Said Gober

Clark is a completely different runner than Lehman, running strictly in between the tackles while Lehman likes to bounce the ball to the outside. If there’s a player on Wissahickon who’d doesn’t shy away from contact it’s Clark, as he showed on Friday. “He’s a handful, number 5 is to tackle.” Said Gober.

Clark ran for a 14 yard score on a draw play on third and long right before halftime to put the Trojans up 28-7. He then scored from 17 yards out in the second half to put Wiss up four touchdowns. Clark ran the ball 12 times for 126 yards on the night, a lot of which came in the second half, when the Lower Moreland defense was tiring out.

Jeremiah Clark up scores on the draw on third and eight. 28-7 Wiss leads with 1:33 left in the half @PaFootballNews @SOLsports pic.twitter.com/rqn82Q8YfT

“It’s not just me and my speed out there so now the defense has to worry about my speed and the physicality that Jeremiah brings to the table, so it’s a dangerous combination” Said Kyle Lehman.

For Lehman it takes the a big burden off his shoulders for the last few games, as he and Clark will look to split carries going forward. Lehman will get much needed breaks after being the lone back for almost every snap so far this season, “Him and I splitting reps will definitely give me some breaks. When it’s a fourth and 1 you’re going to be able to get J.C in to get that one yard and then when it’s first down I can pick up 10, so it could be a pretty deadly combination” Said Lehman.

The Wissahickon O line had one of its best games of the year, which allowed the Trojans to control the clock. “Our O Line is stepped it up, they’re getting better every week and I’m really proud of those guys” Said Clark.

If the Trojans continue to split carries between the two backs then Lehman and Clark will be a dangerous one two punch, adding a new dynamic to the offense.

Aidan Defeo, who’s had an excellent season so far has been a big part of the Trojans success on offense, throwing the ball all over the field in the spread offense. Defeo, like the rest of his team had a tough time last week, but had a solid game tonight. His only touchdown of the game opened up the scoring, when he threw the ball 28 yards to Jason Michaels in the back left corner of the end zone for the score.

The Trojans gained a bit of momentum heading into what will be one of their toughest tests yet when they face off against rivals Cheltenham at home. The Panthers are an athletic team who’ve 3 out of their last 4 games since starting the season 0-3 and will be a tough test for the Trojans.