Meadville Rides Simmons and Defense in Comeback Win Over Juniata 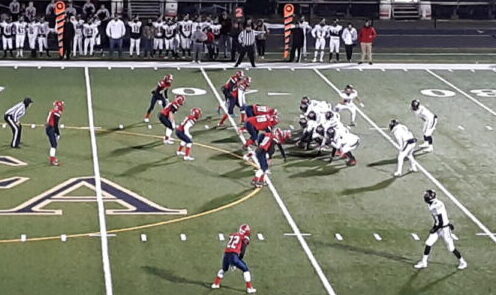 Meadville (in white) on offense.

Meadville’s come from behind 27-14 victory over Juniata at Bald Eagle High School’s Alumni Field was a tale of two halves for both teams.  Averaging 51 points a game, Meadville trailed Juniata 14-6 at half time due to a plethora of mistakes.  To Juniata’s credit, they were moving the ball, they were making plays on both sides of the ball, and they were being physical.  But the Bulldogs did turn the ball over on four occasions courtesy of Juniata’s tenaciousness, had a couple of drive-stopping penalties, and did not seem to play inspired football.

That all changed in half number two as Meadville slowly but surely took charge of their own destiny.  Scoring a touchdown in the third quarter to cut the deficit to two points at 14-12, the Bulldogs kept up the pace and wore down the Indian defense scoring twice more in the game’s final 6 minutes.  Khalon Simmons had a great second half by rushing for 142 yards and 2 touchdowns.  He finished the game with 245 yards and 3 touchdowns.  Meanwhile, as good as a first half Juniata played, the second half found them struggling to find any kind of rhythm.

The Meadville defense rose to the occasion in the third and fourth quarters also by limiting Juniata to 53 total yards and one first down.  They also forced Juniata to commit two turnovers.  Ray Collins, Meadville’s coach said, “We didn’t panic.  Defense is the backbone of our team and they came up big in the second half when we needed them.”  Perhaps his halftime speech had something to do with the Bulldogs seeming like a different team after the intermission.  “I told the kids to look around the locker room and ask yourself if this is the last halftime you want to have this season.  And if it is, okay.  Otherwise, you better come out and play some football.  Apparently, they didn’t want it to be their last halftime.” 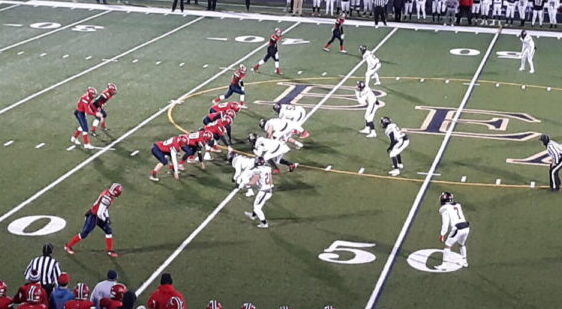 Juniata (in red) on offense.

No one scored in the first 19:19 of the game, though Juniata turned the ball over on downs at the Meadville 11 on their second possession of the game.  Then the teams combined for three scores in the next four and a half minutes.  The first play after freshman Jasper Shepps’ interception of a Simmons pass, Waylon Ehrenzeller ran the ball in for a 6-yard touchdown to record the game’s opening score.  The extra point attempt was blocked and Juniata had the lead 6-0.

Meadville countered by going 65 yards in seven plays with Simmons running for 46 of those yards including the game tying touchdown of 6 yards.  The Bulldog PAT hit the upright and bounced back leaving the score tied at 6.  The Indians answered by scoring on a 34-yard pass play.  Aaron Kanagy hit Shepps who went up and made a nice catch by pulling down the throw with only 11 seconds left until halftime.  Seth Laub ran in the 2-point conversion to give Juniata a 14-6 advantage into halftime.

The second half was all Meadville as they found pay dirt on their second drive of the third quarter when Brady Walker scored on a 2-yard touchdown run.  The 2-point try ended up being no good and Meadville trailed 14-12 going into the last quarter.  That’s really where Simmons shone.  He gave his team their first lead on a 2-yard run up the middle and then iced the game with a 65-yard gallop with a minute and a half left.  Simmons had 93 yards rushing in the fourth stanza.  His 2-yard run was set up when Amarri Lewis stole the ball off the Juniata ball carrier at the Juniata 27.

Meadville gained 358 yards for the contest, all on the ground with Simmons showing the way with his 245 yards on 29 carries.  Simmons also had an interception.  Walker had 76 yards on 12 totes.  On defense, Walker was in on quite a few tackles.  The Indians had 203 total yards with 150 coming in the first half.  Kanagy was 9 of 18 throwing the ball for 144 yards and a touchdown.  He was picked off twice.  Shepps had some day catching 4 passes for 106 yards, intercepting 2 passes and recovering a fumble.

The first thing Coach Collins said after the game was, “Boy that was a nice football team.  They got a good football team.  They were tough.  Holy cow, were they tough.  I’ll tell you they lived up to the hype.  He (Coach Kurt Condo) should be proud of those kids.  They had us on the ropes.”

Meadville now advances to play Allentown Central Catholic possibly at Bald Eagle.  The Bulldogs upped their record to 12-1, while the Indians finished their season 8-4.