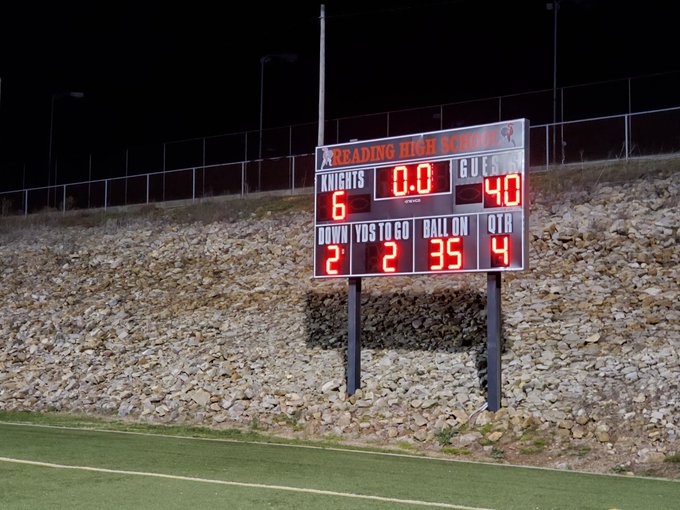 READING- The Cheltenham Panthers wasted little time Thursday night, as they scored 21 points in the opening quarter and rolled to a decisive 40-6 win over Reading in a United X league football game at Reservoir Stadium, on a cold and windy night before a senior night crowd.

Quarterback Zach Gaffin scored his first of three touchdowns on the night from 25 yards out, on the first play from scrimmage after a 38 yard kickoff return for the Panthers. Cheltenham took advantage of great field possession much of the first half.

Running back Tyree Towns then scored the next time the Panthers had the ball from 22 yards. Gaffin then went to the air connecting with a wide-open Amani Ezell for a 21 yard score with 2:19 left in the opening quarter and a 21-0 lead.

Reading seemed to settle down on defense in the second quarter only allowing Cheltenham a single score on a 25 yard run by Sam Sykes at the 6:07 mark. Going into intermission it was 27-0.

The Knights had trouble holding onto the ball much of night, fumbled the second half kickoff giving the visitors the ball at their own 45. A six play drive ensued and Gaffin ran a sweep to the outside and scored from ten yards with 8:45 left in the third quarter extending the lead to 33-0

The bright spots for Reading was having quarterback Amier Burdain back in the lineup after suffering a concussion against Father Judge in the season opener. The sophomore signal caller had a couple of nifty runs for key first downs in the second half, with Cheltenham defenders putting pressure on him much of the night. Running back Elijah Williams also showed some flashes of brilliance in the second half as he found paydirt from 15 yards out late in the contest.

“We got back to playing Cheltenham style of playing the game.” Cheltenham coach Ryan Neese stated aft the game. ” We had a lull in the second quarter, that I was not too happy with. We need to clean that up as we got a big game coming up with Penn Wood.” He concluded. Reading will try to get into the win column next week against Harry S. Truman.