Zachary Gaffin would not be denied in what was his last ever time taking the field for Cheltenham High School. The senior did everything for his team in their victory over Penn Wood Friday, throwing for a touchdown, rushing for one, as well as coming up with a key sack late in the game. Coming off a historic run to the 5A state championship, Gaffin’s experience and toughness has been key for Cheltenham in what’s been a weird spring season. The Panthers started 0-2, but Gaffin helped his team win their final 3 games, finishing above .500 in the end.

Gaffin was playing with a heavy heart on Friday, thanks to his grandfather passing away earlier in the week. “It was difficult. I remember him coming to all my games and unfortunately because of COVID and his age, he couldn’t get out here. He watched the live streams every week which was great, but this week not being able to have him was tough. He’s still in my heart and I played for him tonight which motivated me more.” 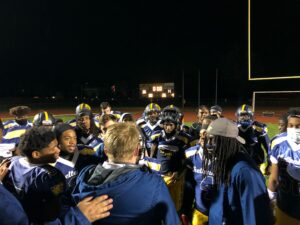 The senior quarterback fought through adversity in the game as well, when his team went down 8-0 only after a couple of plays. Gaffin helped Cheltenham score 36 unanswered points in which he accounted for 4 touchdowns, two of which were passes to his favorite target Emani Ezell. First, Gaffin hit Ezell on a screen pass on third and long that went for 51 yards to tie up the game and the second came on a deep pass to put the Panthers up 22-8. Those were the only two passes Ezell caught all game, but they were definitely were important ones.

Amani Ezell to the house! He takes a 51 yard screen pass on third and long for a touchdown. Two point conversion is good. 8-8 with 7:15 left in the first pic.twitter.com/z2kuNkZcUE

“I’ve been playing with Zach since seventh grade, we’ve always been throwing around the ball so it just clicks between us. I love playing with him and I’m going to miss him. It’s not going to feel the same playing with somebody else.” Ezell explained

Amani Ezell with another touchdown catch. This one was a bit different than the first. Gaffin threw the ball up for grands and Ezell came down with it. 22-8 Cheltenham leads @PaFootballNews pic.twitter.com/XMHerVLGuH

Ezell is one of the many members of the senior class who has a special connection with Gaffin after playing with him for over six years. Sam Sykes is another senior who like Gaffin and Ezell was a major contributor on offense, rushing 10 times for over 100 yards, including a 40 yard touchdown in the first quarter which gave Cheltenham a lead they would never surrender.

“These seniors are my brothers, I’ve been playing with every single one of them since eighth grade up until now, so it’s very emotional, but I’m glad I had the opportunity to share the field with them.” Said Gaffin

Zachary Gaffin certainly went out with a bang, finishing the game with 10 rushes for 90 yards, and even though he only completed 3 passes, all of them went for touchdowns. He also helped his team on the defensive side of the ball, holding Penn Wood to only 6 points after their opening drive touchdown. The Panthers defense was able to come up with a few huge stops on fourth down as well as picking off Penn Wood quarterback Jason Kempf three times.

Zachary Gaffin with a big sack on 4th down pic.twitter.com/GSDULAjkHJ

Gaffin has left his imprint on the Cheltenham program like nobody else and will be deeply missed by Cheltenham next year as they look for a new leader. During his junior season while playing linebacker, Gaffin was the only captain of a team that went all the way to the state championship game and was one play away from winning it all. The program has made a huge impact on Gaffin as well, “This program is the definition of family, I’ve been here when people were quitting, when I was a freshman, seniors quit, they didn’t want to play. My class stayed, we put in the work, and as the years went on we were able to hit the field and we became a game changing class for this program.”

The versatile player will not be playing both sides of the ball in college, as he will solely devote his time to playing linebacker at the next level. The 5’10”, 200 pound Gaffin is still undecided on where he will play in college, with many local teams wanting his services.

Cheltenham unfortunately missed out on the spring playoffs with a record of 3-2, totaling the amount of losses they had in 2019. Despite this, the program is heading in the right direction under coach Ryan Nase, as they try and take this team to new heights.