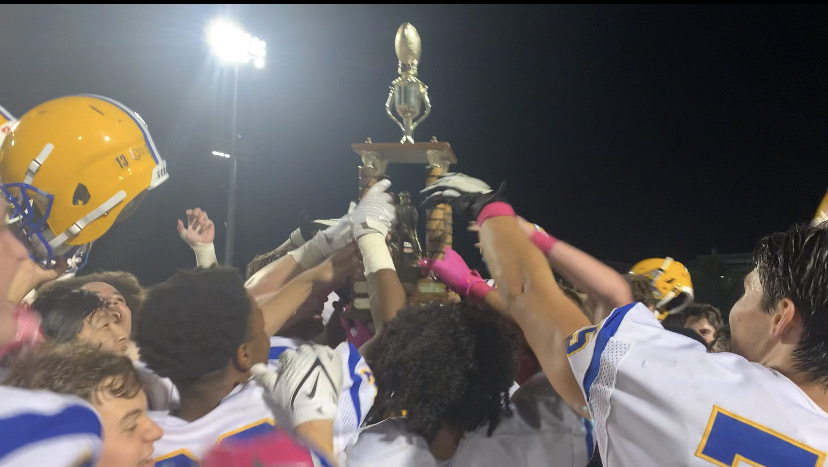 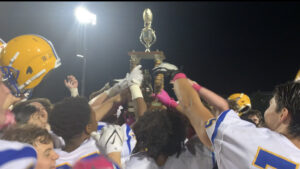 Before there were East and West, there was just Downingtown High School.  Since the split in 2003, both East and West have put on clinics on the football field to determine who is the better school of the two.  Considering that they both share a stadium, the stands were completely filled with fans and alumni of both Downingtown’s.

The game sealing seven-play drive was capped with Jamy Jenkins to Louis Rossetti eight yard TD reception. It came down to the wire and with 43.8 seconds left in the game, the Cougars just wanted it more.  Rossetti had a big field of grass in front of him and he wasn’t stopping for anybody, as he walked in the end zone untouched.

D West with a 23-yard score from Evan Wickersham. West up 7-0. 7:28 in 1st. @FootballDwest @PaFootballNews pic.twitter.com/MzeOKm48NQ

“This is a huge win, we came out here and knew that we were the better team and that is was going to be a tough one.  But we came out and played our brand of football and won the game,” said East fullback Louis Rossetti.

Going by record, East was the favorite after only losing one game coming into Friday night and West already have three losses to their name.  West showed that they can play with anyone and believed within themselves that they could come victorious, The Whippets went up 7-0 early on the Cougars in the first quarter, with a 23-yard Evan Wickersham TD run with seven minutes and 28 seconds remaining.

D West with a 23-yard score from Evan Wickersham. West up 7-0. 7:28 in 1st. @FootballDwest @PaFootballNews pic.twitter.com/MzeOKm48NQ

No less than two minutes later, the Cougars received their kickoff at their 35-yard line and drove down 65 yards in seven plays, capped off with a Josh Asante TD between the tackles.  Coming off an injury, Asante scored once more on the ground and rushed for over 100 yards on only nine carries.

Bo Horvath and Asante amassed 300 yards rushing tonight on the ground combined.  Horvath didn’t see the end zone tonight, but he set his team up to score with his 200-yard rushing performance.  Aside from Rossetti and Asante, Jenkins had a 15-yard TD run with eight minutes, and 32 seconds left in the first half which extended the lead to 21-7.

“When Josh is healthy, it makes Bo that much better because Bo is not carrying the ball every rep and I think that really helps.  In our program, when we have a two-headed monster, we’re pretty good,” said Cougar head coach Mike Matta.

Just after Rossetti’s first TD reception in the 1st half, Elijah Ford forced a fumble on Horvath which negated a big chunk play and gave all the momentum in West’s favor. West recovered at their own seven yard line.

Whippet RB John Mulville added a 65-yard reception and was tackled just short of the goal line at the two.  West dialed up a play immediately after and Mulville’s number was called to get the TD to improve to a 27-14 score at the half.

The Whippets came back after being down by as much as 21 points.  They allowed all 27 points that were scored on them in the first half and then pitched a shutout until the final seconds of the game.  Will Mahmud scored the two touchdowns to put them up a point after a missed extra point from East earlier in the game.  This was their first lead since the 1st quarter.

West now up 28-27. 6:25 in the game. Mahmud with the 5-yard score. @DTownFball @PaFootballNews pic.twitter.com/sWSmxV3yRG

West had it going their way forcing a Cougar punt with five minutes left in the game.  Shortly after the Whippets are moving the ball comfortably, trying to convert a 3rd and 6 on their 30 and then get flagged for 12 men on the field.  Now it’s 3rd and long and East’s Xander Hearns records a sack to force a bad punt that gave the Cougars good field position on their 42-yard line.

“It hurts man, that was the lesson.  There are life lessons in high school football and we are learning them the hard way.  We deserved better a couple weeks ago and we deserved better tonight,” said West coach Mike Milano.

The Whippets faced a similar defeat against Coatesville a few weeks ago with a final drive by the Red Raiders to win jut before time expired.

“It was a hard game, they stormed their way back in the game and played with a lot of passion and heart.  You’ve got to give them credit and they came ready to play, didn’t roll over and they had a chance to, but didn’t,” said Matta.

“Second half we thought we would go down there and score and put them away and we ended up screwing up and next thing you know, it’s a ball game.”

The Cougars (8-1) take on Coatesville (8-1) next Friday in a winner take all game for the Chesmont league title.  They are also playing for a position to have home field advantage in the playoffs moving forward.  Whereas, The Whippets (4-5) are trying to get over that hump next week against Avon Grove (3-6) to try and make their way into playoffs.