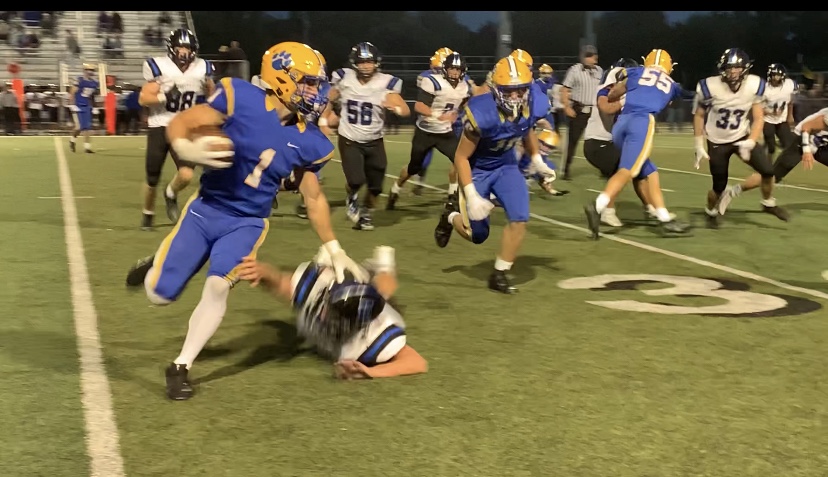 Since 2012, Downingtown East has started a “Spread the Word” campaign in the community to end the usage of the “R word” moving forward to promote inclusion and wearing white as symbol of unity and solidarity within their student body and staff.  Downingtown East has partnered with the Eagles Autism Foundation to embrace inclusivity and impact lives in a positive way.

The Cougars picked up right back where they left off from last week’s Bishop Shanahan win.  The final score was 41-7, but they had to fight for every point this week.  Kennett seemed to have the upper hand by going up 7-0 in the first quarter with a 63-yard TD pass from Brett Kauffman to Ian Guyer, which only took them four plays to do so.

Kennett played a tough and physical game against the Cougars.  The Blue Demons forced a fumble on The Cougars first drive and also forced an interception on their second drive.   Kennett’s Josh Barlow made the interception after a high throw off an East receivers landed into Kennett’s possession.

“The game plan for us was to make it physical, last and we knew they were a super good team and program,” said Blue Demons head coach Lance Frazier.

“We focused more of the style of play, and I think our guys gave it all they had, and they never gave up so I’m proud of that, extremely proud of that”

The Blue Demons could not keep up with the Downingtown’s tempo which led to the third quarter where Downingtown really showed how good they can be.  Just before that, an Erik Thelander TD catch and Bo Horvath goal line score just before the half and extended the lead to 14-7.

This game would mark the first game back for senior quarterback, Jamy Jenkins after recovering from a fractured wrist for the past three weeks.  Jenkins would have himself a solid night while throwing for 220 yards and three touchdowns in his return.  His senior counterpart, Horvath would also have himself a day with 242 yards rushing to go along with his two scores.  This performance by Horvath makes him just 16 yards shy of a thousand-yard rushing season already heading into week six.

Jenkins spread the ball out evenly to his receivers and had three different scorers in Caden Walsh, Thelander and Jackson Noble.  Walsh had himself a day with scoring his first TD of the season and having two catches for 40+ yards.  East had relieved their starters for the whole fourth quarter and kneeled to victory on three straight plays to close out the game.

“We knew they didn’t have that a lot of players, but they are very tough, so we wanted to be physical, relentless and keep going.  I took a while, but I think we finally did it and imposed our will in the second half,” said East head coach Mike Matta.

“All the credit goes to them, that is a tough group of kids and I have a lot of respect for that program”.

Cougars move to 4-1 on the season and gear up to take on Oxford (2-3) next week.  The Blue demons will aim to get back healthy and take on Interboro (3-2) next Friday.

Mike Waite and Jack Basili force the fumble and the Cougars recover on the 29. @PaFootballNews @DTownFball pic.twitter.com/1nW52HrIU0