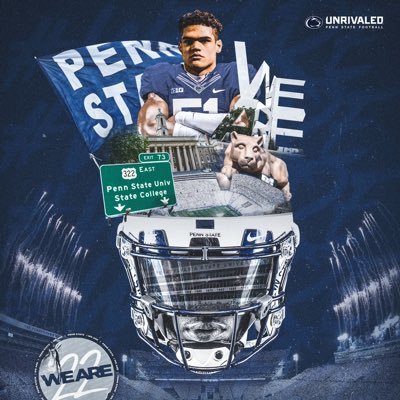 Today we caught up with Drew to ask him what made him choose Happy Valley:

Drew: Since I was in 7th grade

PFN: Why did you choose to commit to the Nittany Lions?

Drew: It felt right. I have strong relationships with multiple coaches and it’s the hometown team

Drew: Why wait when you know where you want to be

PFN: Who was your biggest influence at Penn State, who recruited you?

Drew: A very athletic tackle that is physical and knows how to finish blocks

Drew: It was really fast and exciting and crazy to say the least

Drew: It did not effect it very much other then that I would’ve loved to meet the coaches in person

Drew: My mom was very supportive as to not pushing her favorite schools on me and letting me choose for myself

PFN: What do you think is the most exciting thing about the PSU program?

Drew: They’re contenders every year and just need a little extra push to get over the top

PFN: What are you most looking forward to while playing for the Nittany Lions?

Drew: My head coach. He suggested the switch on to the line and I took off ever since.

Drew: Just because I’m committed now does not mean I’m not committed to my high school team. I’m still 1000% locked in for the next two seasons.