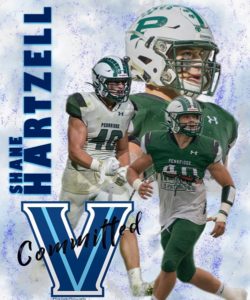 It’s no secret of late, Coach Ferrante and the Villanova Wildcat coaching staff has been clobbering the recruiting scene in Pennsylvania. Their latest conquest? Six foot 2, 220 pound linebacker Shane Hartzell out of Pennridge.  Shane will make a nice addition to the already deep class of PA recruits the Wildcats have tapped. He made his announcement on twitter this afternoon:

We caught up with Shane and asked him about his decision:

PFN: Why did you choose to commit to the Villanova Wildcats?

Shane: I chose Them because as soon as I got on campus it felt like home. Everything about it is what I was looking for in a college.

Shane: I don’t think it’s that early of a commitment. I had an opportunity that fit me great and I did not want to pass up on it.

PFN: Who was your biggest influence at Villanova, who recruited you?

Shane: Coach Pennypacker, Coach Ferrante and coach Riede were the biggest influences. They have treated me like one of their own the day they started recruiting me.

Shane: They’re getting not just getting a linebacker but an athlete. I think I’m a very versatile player that can play in many different schemes.

Shane: There were lots of ups and downs. But it was a very exciting process.

Shane: I don’t think it has affected all that much besides the fact of only being able to do virtual visits. Not being able to@go to camps was a big difference as well.

Shane: They supported me the whole way and everything I did.

PFN: What do you think is the most exciting thing about the Nova program?

Shane: I think I’m the next few years they are going to explode with a lot of talent they are bringing in.

PFN: What are you most looking forward to while playing for the Wildcats?

Shane: Looking forward to building chemistry with my teammates and dominating in the FCS.

PFN: Tell everyone out there in the NOVA football world something they’d never know about you until you told them:

Shane: I’m not sure really

Shane: My family because they have always pushed me to be my best.

Shane: I couldn’t have done it without my teammates pushing me and everyone’s support they have given me throughout all of football and school