Ridley (7) vs North Penn (2) District One 6A Playoff Preview 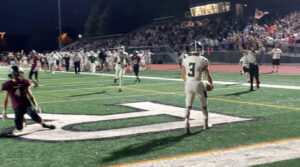 Ridley has a very powerful offense led by Tahir Mills and John Heller who both had great games against Conestoga. In particular, Mills had a historically great game breaking the record for most yards (357) accumulated in a game and scoring five touchdowns on top of that. They have a lot of speed on both sides of the ball. This offense can change the momentum of game with the flip of a switch. On defense, they were able to contain Peter Detwiler and Calvin Shirley as Stoga was only able to put 23 points all game. The key for Ridley to upsetting North Penn is to lean on the offense behind their strong offensive line. Then, the Green Raiders should also stick to their strong rushing attack after seeing Mills have the best performance of his career. This is a team that has surprised a lot of people this year and could surprise North Penn if underestimated.

North Penn has been regarded as one of the best teams in District One. They are currently ranked second overall in the pafootballnews.com 6A state rankings as well. They are built very well all the way around. Running back Khalani Eaton has been the bull in this very powerful offense, eclipsing 400 total rushing yards in his high school career. Then, their offensive line has been able to push around opposing defenses all year. North Penn’s offense has averaged about 37.2 points during the regular season, an astounding accomplishment. On defense, they are almost just as good. They have been able to hold tough opponents such as Pennridge, CB West, and CB East to three touchdowns or less. Every team has holes that can be exploited, but North Penn does not seem to have any obvious ones.