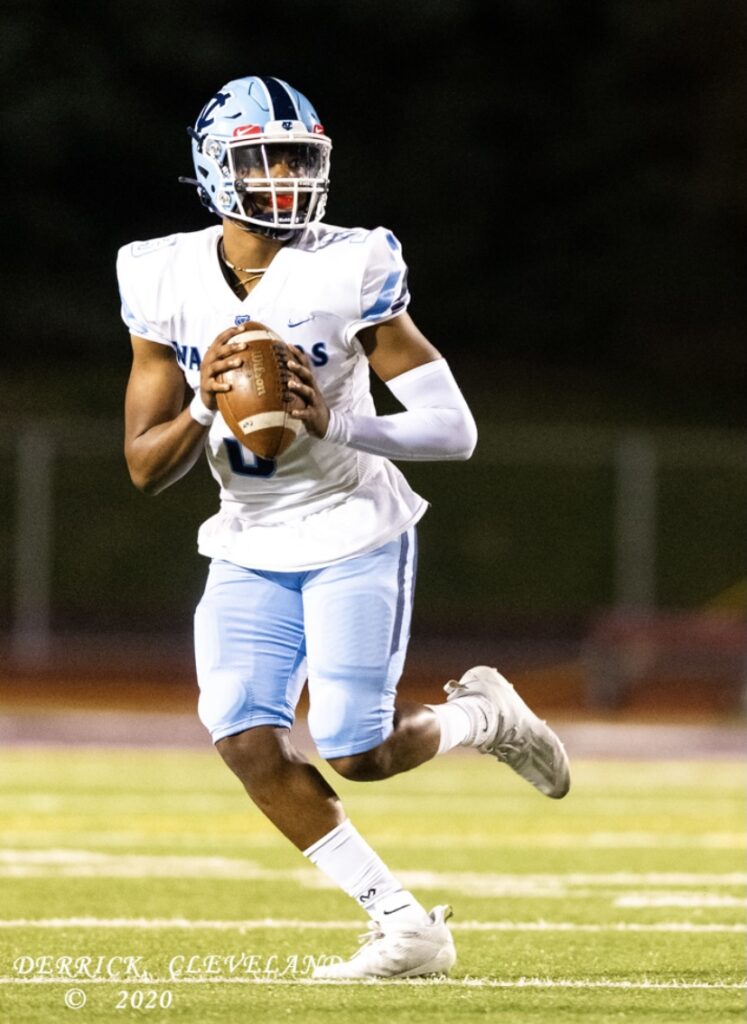 Central Valley quarterback Ameer Dudley completed 9 passes on 11 attempts for 187 yards and added a rushing touchdown in a 49-20 win against Bedford on Friday, November 20, 2020 Photo by Derrick Cleveland

Central Valley Senior quarterback Ameer Dudley decided to continue his athletic and academic career at the University of Harvard Monday evening. Fast forward to Friday night as he led the Central Valley Warriors to a 49-20 victory over the Bedford Bison helping his team punch a ticket to their second straight PIAA 3A State Championship game. Dudley finished Friday’s game with 187 yards passing on 9-11 and added a rushing touchdown for his efforts. Another huge factor in the game was Junior running back Landon Alexander who finished with 155 yards on 17 carries and added three touchdowns. For Bedford Junior quarterback Mercury Swaim led the Bison offense with 243 yards passing and three touchdowns on the night. 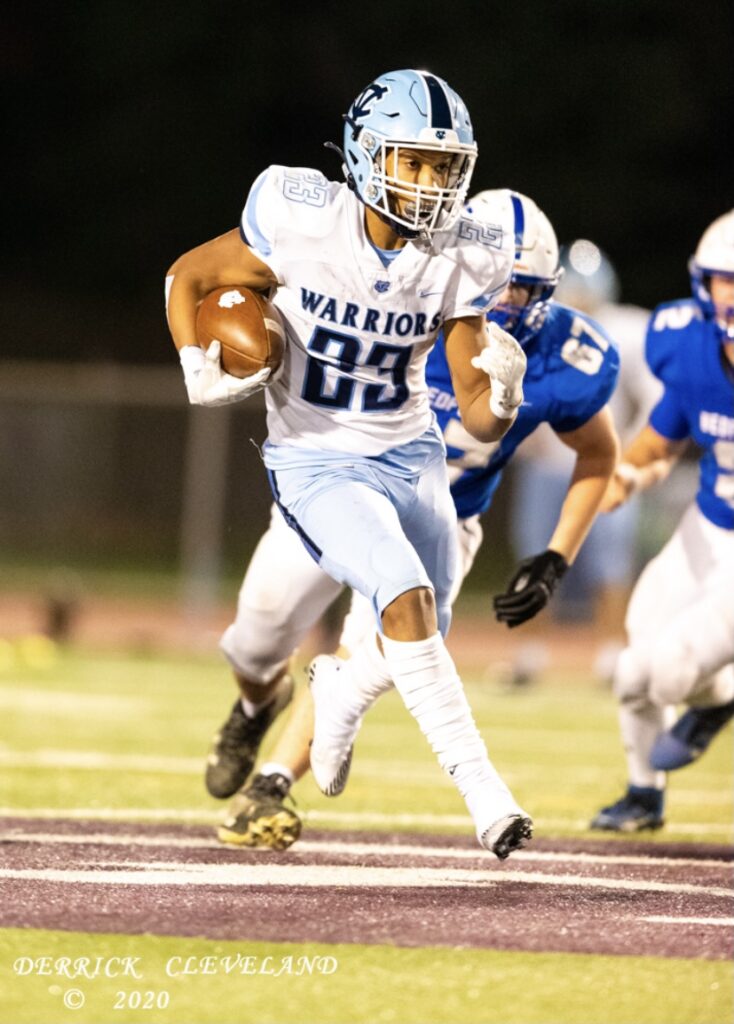 Central Valley running back Landon Alexander finished with three touchdowns and 155 yards on 17 carries in the PIAA 3A State Semi-Final Friday, November 20, 2020. Photo by Derrick Cleveland

The Warriors scored quickly and often in Friday night’s game. On the opening possession, the Warriors drove right down the field and was capped off by a three-yard rush by Dudley. Freshman kicker Ben Walmsley made the point after attempting to give the Warriors an early 7-0 lead with 8:01 to go in the first quarter.

The Bedford Bison started their drive on the 32-yard line and after a huge run by Bison Junior quarterback Mercury Swaim was called back due to a faulty whistle by the referees. Swaim took the option to the left side and scampered for a gain of at least 50. The whistle was blown at the 41-yard line negating the huge run and this would be the momentum killer for the Bison. After failing to gain a first down the Bison were forced to punt. Central Valley needed just one play, Senior running back Myles Walker took the handoff and dashed 82 yards to the house. Walmsley’s point-after attempt was good pushing the Warrior’s lead to 14-0 with 5:23 to go in the first quarter.

Bedford would answer their following possession. After using almost all the first-quarter clock, Swaim took the ball from 8 yards out on fourth down with six seconds to go in the first quarter. The point-after attempt was no good making the score 14-6. Central Valley would waste no time on the following drive using just 5 plays, capped off by a 3-yard rushing touchdown by Sophomore Jayvin Thompson. Walmsley nailed the point after attempt, pushing the Warrior’s lead to 21-6 with 10:19 to go in the second quarter.

Bedford couldn’t find an offensive groove and was forced to punt once again. On the punt, Walker returned the ball 65 yards to the house but was called back due to a crackback block. Central Valley would end up scoring on the drive. Alexander would score his first touchdown on the night from 9 yards out. Walmsley made the point after attempt giving the Warriors a 28-6 lead with 6:10 to go in the first quarter. 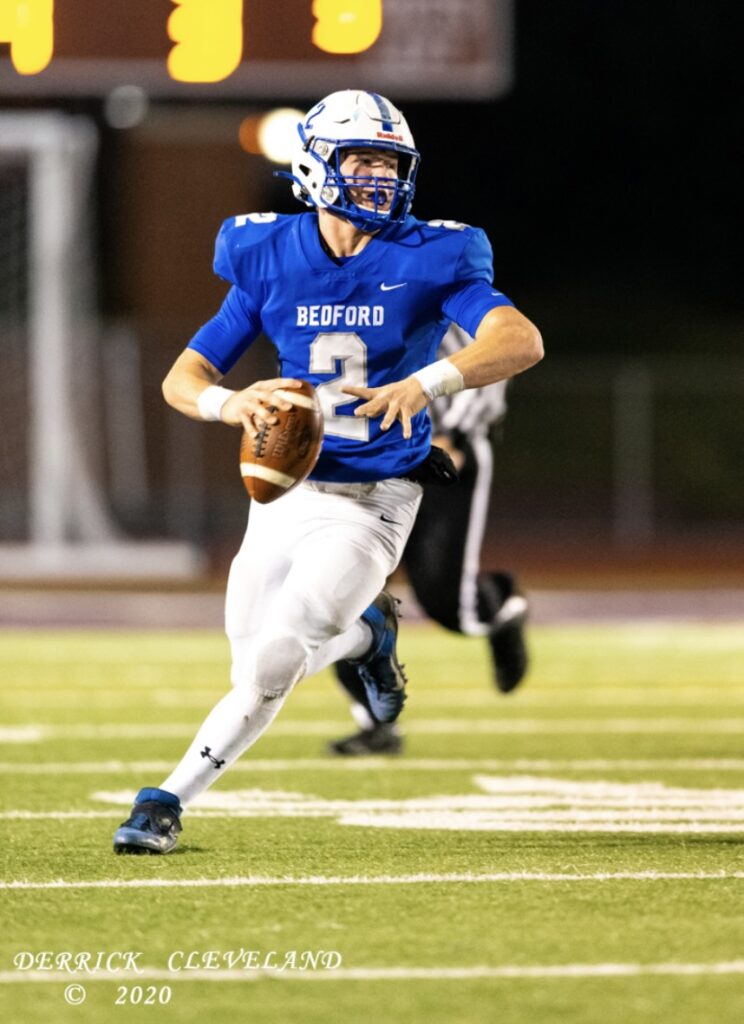 Bedford again would give the ball back to Central Valley on their following drive. This time Senior Brandon Graham stepped in front of the Swaim pass at the 36-yard line. Central Valley would strike again but not before a huge 49-yard connection from Dudley to Sophomore Kevin Ressler. Alexander would cap off the drive with a two-yard rushing touchdown with 4:02 second quarter. Walmsley nailed the extra point extending the Warriors lead to 35-6 which would be the halftime score.

Bedford opened the second half with back to back fourth-down conversion fails. The first fourth-down attempt failed, giving the ball to Central Valley at the 32-yard line. A few plays later Alexander scored his third touchdown of the night from 25 yards out. Sophomore kicker Serafino Desantis made the extra point making the score 42-6 Warriors. Bedford’s next drive again failed on fourth down but the Bison would catch a break after Dudley dropped back to pass and was sacked from behind, knocking the ball out with a Bison recovery.

Bedford would take advantage of this turnover and just two plays later Swaim found Senior Spencer Ebersole for a 57-yard strike. The two-point conversion was no good making the score 42-12 Warriors with 1:18 to go in the third quarter. The following kick by Bedford was an onside attempt and was successfully recovered by the Bison. The Bison would find the endzone again when Swaim hit Senior Steven Ressler for the 19-yard touchdown. The two-point conversion was good making the score 42-20 Warriors with just 23 seconds to go in the third quarter.

After an onside kick it’s ANOTHER BISON TOUCHDOWN 42-20 after the extra point 23 seconds left in the 3rd quarter. This game isn’t over yet @PaBackyard @PaFootballNews @warriors_cv @bedfordfootball pic.twitter.com/N3raVZ0IBd

Central Valley would close the scoring in the game when Thompson would find the endzone for a second time on the night from five yards out. Walmsley’s point-after attempt was good making the score 49-20 which would be the final score on the night.

The historic season for the Bedford Bison has come to an end in the PIAA 3A Semi-Final. For Central Valley, this will be their second straight year in the State Championship game. Last year the Warriors lost a heartbreaker to Wyoming Area 21-14. Dudley commented after the game about the difference between last year’s team and this year’s, he said “ We have a bigger chip on our shoulder this year. Last year we lost in a fashion that nobody wants to lose, we blew a lead. So this year we’ve been working, we’ve been trying to work harder than anybody. That’s what’s gonna help us next week, we just have to keep working hard”. Central Valley will face off the winner of Saturday’s Wyomissing and Danville winner next week in Hershey where a 3A State Champion will be crowned. 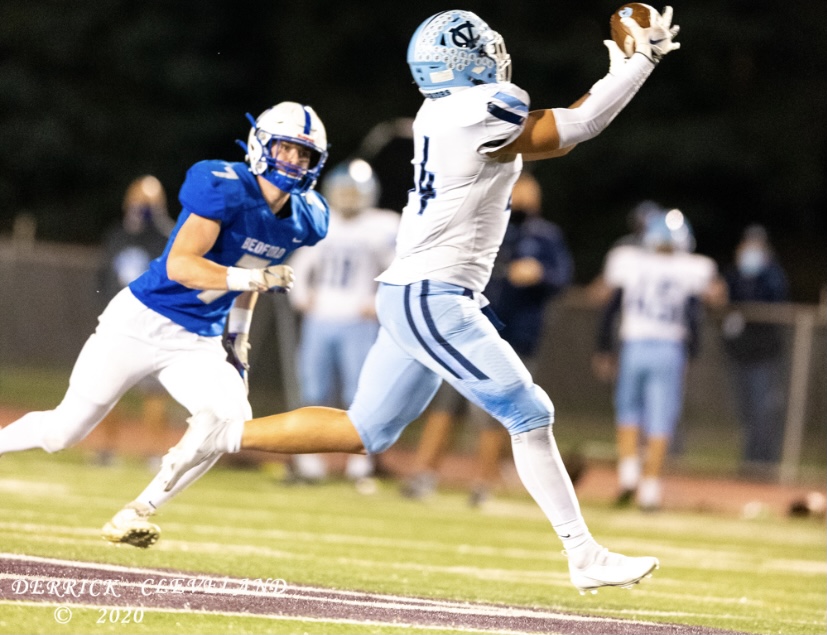