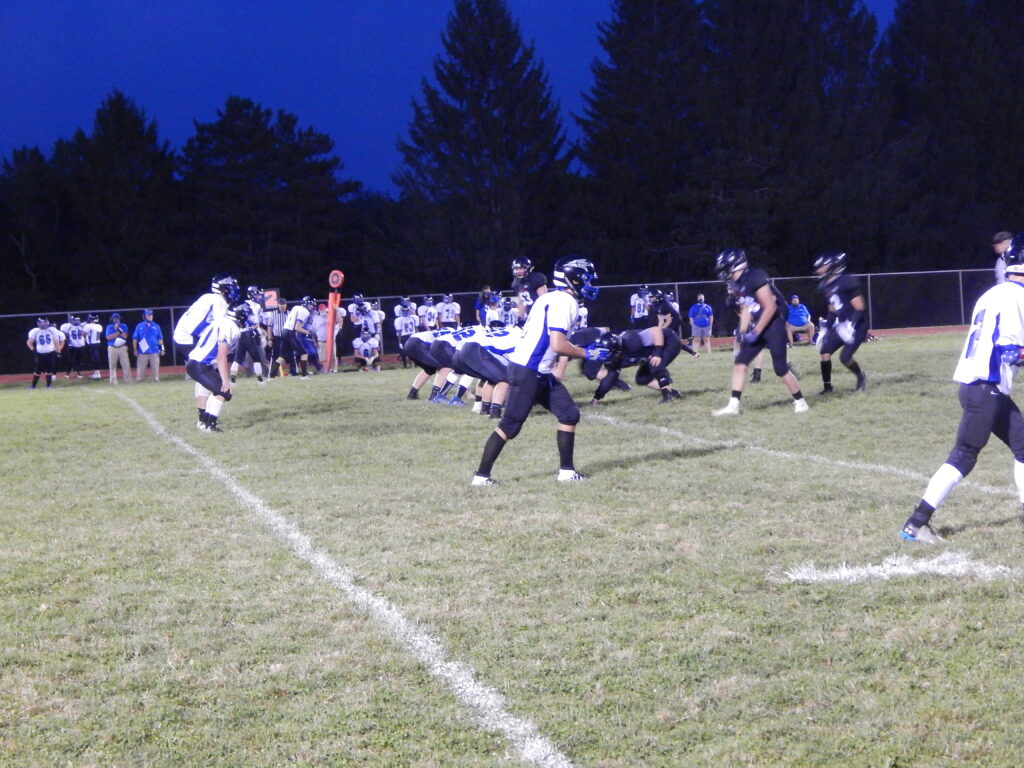 Trenten Wheeler threw four touchdowns and collected 178 yards of total offense while adding an interception on defense as Cambridge Springs rolled to a 41-13 win over Lakeview Saturday night.

The Blue Devils controlled the scrimmage line and scored on three consecutive second-quarter possessions to open up a 20-0 halftime lead.

“I’m super proud of the way our offensive and defensive line played tonight,” said Liberty. “Our kids were ready to play, and it was exciting watching them hit people.”

Ayden Miller scored all three first-half touchdowns as his 14-yard reception from Wheeler opened the scoring.

Miller, who rushed for a game-high 98 yards on 13 carries, added a pair of 5-yard touchdown runs in the second quarter.

“It was awesome effort tonight,” said Liberty. “Miller and Wheeler had huge games, and I’m very proud of them. We had several guys that came in and played hard.”

While Cambridge Springs could find the end zone three times, Lakeview could only muster one first down and was limited to negative ten yards by halftime.

“It’s disappointing, all can do is move forward and watch the tape, and work more fundamentals,” said Lakeview head coach Bill Hickman. “One thing I can promise you is that this team won’t quit. We will come back strong. We’re going to fix what we need to fix.”

“I had no idea about that, but it is awesome; it shows a lot about our kids,” said Liberty.

The Blue Devils needed only 2:05 of the third quarter to increase their lead to 26-0 as Wheeler found Colton Smith for a 6-yard touchdown. Wheeler’s 21-yard gain and Miller’s 32-yard sprint were the big plays of the drive.

Lakeview had plenty of fight in them to start the second-half as Gavin Murdock connected with Hunter Miller for 30 yards; then raced 23 yards to the Blue Devils 7-yard line.

On 4th-and-goal from the five, Murdock and Miller connected again for a 5-yard touchdown putting Sailors on the board.

“We fought until the end, and did make some plays in the second half,” said Hickman. “I told them at halftime we can fold it up and go home, or we can play our brand of football.”

Fourth downs had plagued Lakeview in the first half with its defense going 0-3.

“We didn’t play a great football game tonight,” said Hickman. “We made a lot of mistakes. We need to ban together and fix it and move forward.”

Following a punt, the Sailors looked like they might make things interesting driving into Blue Devil territory. However, Landon Bryne intercepted Murdock and set up Cambridge Springs at the Lakeview 35-yard line.

“We drew that up at halftime, and our defensive coordinator was on point,” said Liberty. “We saw the play develop, and Bryne made a great play.”

From there, the Blue Devils put the game away.

Aidan Rauscher hauled in a pair of touchdowns from Wheeler of 24 and ten yards giving Cambridge Springs a 41-7 lead.

Lakeview closed the scoring on Murdock’s 2-yard run with three seconds to play.

Murdock led the Sailors going 5-for-16 for 69 yards, a touchdown, and two interceptions He rushed for a score, but due to sacks had zero yards rushing on 12 attempts. Kendall Crocker added 22 yards six carries.

“I guarantee we’re going to clean this up and finish the year strong,” said Hickman. “This was a bad game, and the stars didn’t align for us tonight.”

Both teams will be in action next Friday night. Lakeview travels to Cochranton, Cambridge Springs, heads to Maplewood.

“We’re going to enjoy this one tonight, then we’ll get ready for Maplewood on Monday,” said Liberty. “This was my first win at a new program, so I want to enjoy it.”