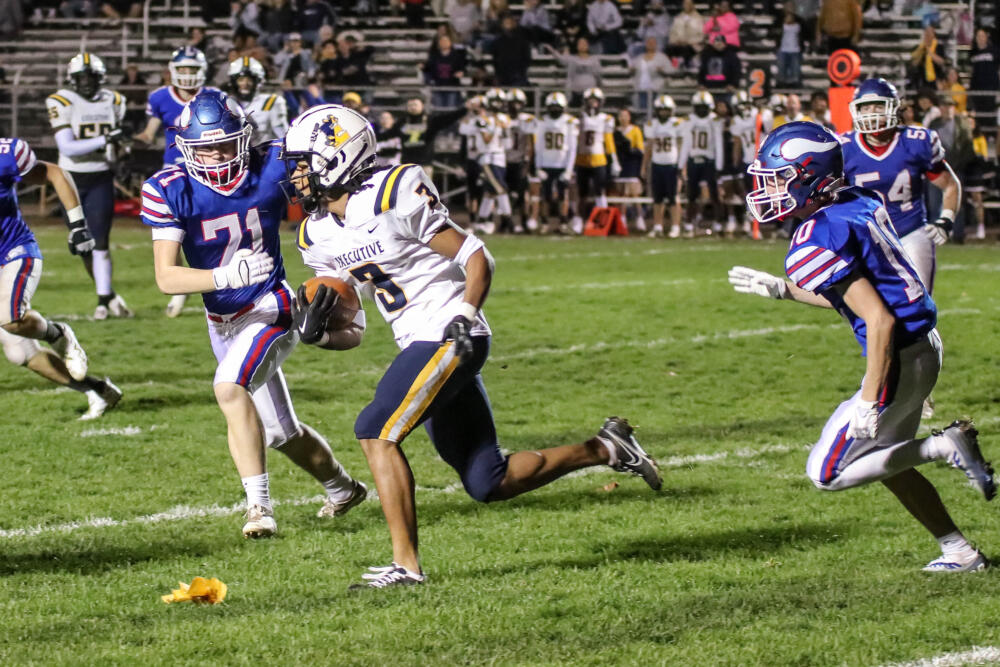 “I think we match up very well, we watch a lot of film, we see what they do,” said Raptor HC-Larry Ford. “We’ve played a physical game the past couple, we know this will be a physical game as well so, I think the most physical team is going to win” he went on to say before the game. A physical game is what we saw as both teams battled hard for four quarters ending in an upset victory for the EEAC Raptors in their first ever District XI playoff game in just their second year of existence as a program.

The game started with interceptions by both teams, the first coming with Williams Valley’s Isaac Whiteash throwing a pick on a 2nd and 11 play that was picked by Raptors Jyhmiek Roman at around the 10 yard line and would return to the Vikings 30 but had block in the back penalty would setup EEAC back at the Williams Valley 7. Raptors now with the ball, on the 5th play of their drive, Raptors QB-Darmel Lopez throw it up wildly and Vikings Brady Evans would leap and pick it off, setting up Williams Valley at the 40 with 8:09 still to play in the first quarter. Five plays and 60 yards later, the Vikings would put the first points on the board when a run by Alex Achenbach for 7 yards would have Williams Valley leading 7 to 0. On the ensuing kickoff, Raptors return man would get it to the 47, and just two plays later, Roman would race 63 yards for the touchdown, a 2pt. conversion would have the Raptors leading 8 to 7 now with 4:43 still to go in the opening quarter. Williams Valley would get the ball again only to see them have to punt it away but, on the punt, the Raptors would fumble and the Vikings recover, giving them possession again, now at the Raptors 49, a couple plays later, the Vikings would fumble and the Raptors FS-Josiah Floyd would pick it up a race downfield for a score but a touchdown saving tackle by Braydon Crisswell would have EEAC starting the drive at the Viking 25 with :48 seconds to play in the first quarter.

Williams Valley would halt the Raptors, setting up a 4th and goal from the 7 but EEAC would go for it but would be stopped at the 2, giving the ball back to the Viking 1st and 10 with 10:11 to play in the half. “We need to be able to tackle number 5,” said Coach Ford before the game, and on the next play for the Vikings, the Raptors did just that, recording a safety by the other Roman, this one being Anthony, who would wrap up Achenbach in the endzone to extend the lead to 10 to 7. Williams Valley would punt away after the safety, and the Raptors would again have great field position, this time from the 45. Three plays later, bang, another deep pass from Lopez for 47 yards with 8:40 to play till halftime, the score now 16 to 7. The Vikings on their next possession would sustain a decent drive, 8 plays but would have to settle for another punt, a punt that would be downed at the EEAC 5 with 5:29 now to go in the half. Raptors would end up punting but a fake punt pass deep in their own territory, at the 11 in fact, would fall incomplete and the Vikings were in business. Two plays was all it took for the Vikings to score when Achenbach would rumble in from 6 yards out, bringing the score to 16 to 14 Raptors with 3:02 to go till halftime.

The excitement wasn’t over just yet in this first half as the Raptors QB-Lopez would connect on a deep pass, catch, run by J.Roman for about 46 yards heading into the endzone when Evans, who was chasing him down the field, was able to catch up and pound the ball from his arms causing the fumble and the Vikings would take over still down just 2 with 2:43 to play in the half. A quick three and out however would give the ball back to the Raptors at their 20 with :56 to go. EEAC had a few chances to move the ball but three incomplete passes and a holding penalty would stall the drive and we would see that always famous, HAIL MARY to end the first half, ending in an interception by who else… Brady Evans. The score at the half… 16 to 14 Raptors ! EEAC-QB-Lopez went 7-13-2=198 yards in the first half.

It was the Raptors now receiving the second half kickoff and would be returned to the 42, again with great field position to start a drive, EEAC wasted no time moving the ball, and in just 5 plays, we had ourselves another score, this time a 5 yard run by Anthony Roman for the score with 9:13 to go in the third quarter, the PAT failed, giving the Raptors a 22 to 14 lead. Williams Valley would respond with quickness however, 3 plays later, Whiteash would hit Freshman Gavin Deiter for 40 yards and the score, a 2pt. conversion would fail, letting the score at 22 to 20 with 8:38 to go in the third. A flag on the ensuing kickoff would have the Raptors pinned deep at their 8 yard line. Three plays later and a HUGE holding penalty would pin EEAC back at their 4. The Raptors would eventually punt from their 33 giving the ball to Vikings at their 38 with 3:18 to go in the quarter. An interception by pass from Whiteash, picked by Emery Plummer would have the Raptors at the 41 with 1:01 to go still in the third, eventually ending the half with the score still 22 to 20.

EEAC would drive down field in the fourth only to see that drive stuffed at the Vikings 6 yard line on a 4th and goal, giving the ball back to Williams Valley with 9:36 to go in the game only to see their drive end in a punt. Raptors with the ball at their 27, they would run 12 plays, run just under six minutes off the clock before punting back to the Vikings with 2:22 to play in the game. Williams Valley would have one last effort, a pass interference on the Raptors would keep the Vikings drive alive with just :42 seconds to play but two incomplete passes and a big sack, for a loss of about 10 yards, had the Vikings at a 4th and 21, now with just :21 seconds to go. On the next play, a somewhat of a trick play went for 18 yards, just short of the first down, giving the ball to the Raptors with just seconds to go…. two kneel downs later, and the Raptors scored their first ever District XI playoff victory, setting up a DXI Class 2A Finals matchup with Catasauqua next weekend at Whitehall, HS 1:00pm on Saturday. For Williams Valley, their season ends with an impressive 8-3 record in their first year up in Class 2A.

Photos by: Dawn Daub and @PFNDan570FB

Alex Achenbach into the endzone