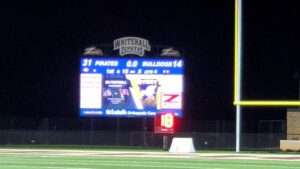 WHITEHALL- The Palisades Pirates captured their second District XI championship in four years with a dominating 31-14 win over Northern Lehigh on Saturday night at Whitehall’s Zephyr Stadium. It was the second time this season the Pirates got the best of the Bulldogs. Back on September 25th Palisades came out on top 35-27 at Northern Lehigh.

It was a special team play that propelled the Pirates to a 10-0 lead. After a scoreless first quarter and a field goal ahead. Marcus Yearwood, blocked a Bulldog punt after a bad snap, Jon DeNato a scooted in the end zone from ten yards out with 6:12 left in the half.

However, on their ensuing drive, it took Palisades two plays to go 72 yards. The first a 48 yard pass Jaden Newton to Nick Petrillo,then Newton hit Kyle McGrath with just seven seconds left in the half to make it 17-7 as the teams hit the break.

The Pirates got the ball to start the second half and scored again as Newton set up a perfect middle screen pass to Mason Smeland for 11 yards and a 24-7 lead with 7:17 left in the quarter.

Smoyer connected with Amorim for a 25 yard score for Northern Lehigh to trim the lead to 10 at 24-14. But then Palisades sealed the deal as Smeland galloped 41 yards to close out the score at 11:53.