Imhotep and Roman collide for the D12 5A Title 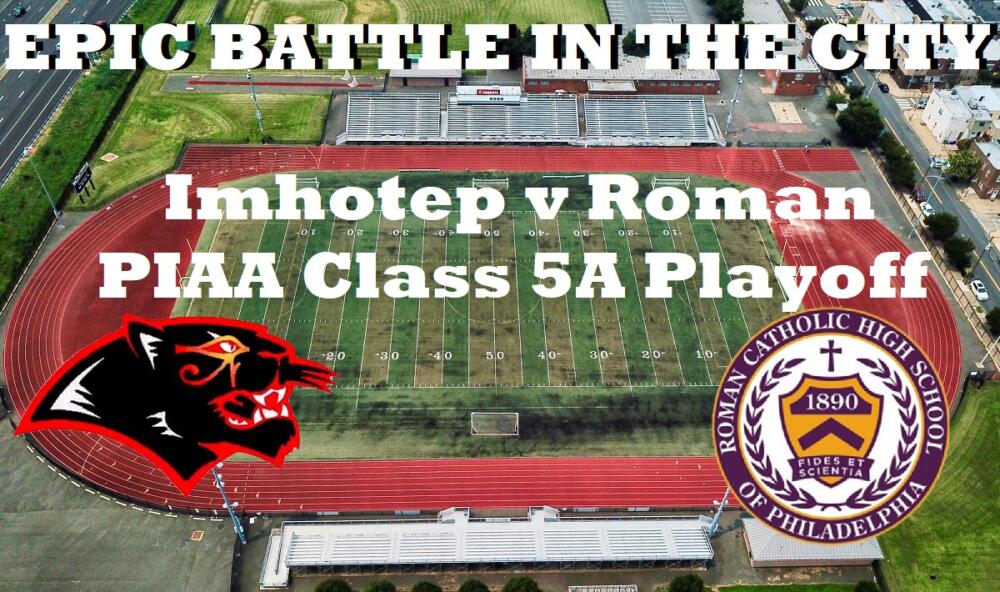 Two programs with the same objective, win a state title and yet only one will advance. The Imhotep Charter Panthers are led by 4th year HC Devon Johnson who has a stellar 22-4 record. Coach Rick Prete leads Roman Catholic and has restored the program in 2 years back to being a top Catholic League team. The Cahillites who went 3-7 in 2021 made a big turnaround to win 7 games this season including the CL 5A title.

Tep is led offensively by Jr. QB Mikal Davis who is in his second year as a starter. Last season he shined in the D12 5A title game as he threw WR’s open for TDs in their big lopsided win over Father Judge. This year he’s picked up where he left off at last year with making some amazing throws to get points on the board. Being a returning starting QB he stated the biggest difference this year is that he’s not afraid to make a mistake. “I’m just letting it rip & use to use my feet when I need to instead of using them first”. Mikal believes when the team started out 1-2 they relied on one another and stuck together by just watching film, fixing little things & coming together as a team. One constant was that “We kept saying to ourselves and one another we aren’t losing another game, and as you can see, we lost close games, so it was just the little things we had to fix as a team”. Mikal has progressed greatly as a passer and credits that to “no longer being hesitant, trusting it more, I see what I see, and I let it rip I’m not afraid to make a mistake, I also keep my eyes downfield until I really have to use my legs first”. What he sees Saturday is “I trust my teammates, coaches and my eyes and will play this game like it’s another day in the office”.

Jr. Jahsear Whittington is a University of Pittsburgh commit and leads a strong and aggressive DL. When asked how he would approach a game in which all eyes are on how well his team plays against a top CL team he replied, “I approach every week the same, I look at the opponent just knowing they can’t stop me from making plays”. Being a 3-year starter, he stated, “the experience doesn’t bring nerves anymore in big games, it just brings more passion to win it again because I’ve never lost in this game”. Tep defense has given up only 61 points in 9 games this season when questioned about how they were so successful he replied, “me being a leader of the defense & team puts a lot of weight on my back especially in moments like this but the guys on this defense locks in and do their job, and one thing I stress is don’t get stuck on the bad play simply make the next play your best one”. Jahsear doesn’t see much difference in this year’s team from last year state finalist besides being younger. Due to them being young he feels they were doubted early because of losing so many key seniors but every year the chip is on the shoulder of this team and the players jobs are to simply work hard and continue to be 1-0 every week. Another leader for the Tep defense is Michigan commit LB Semaj Bridgeman who is your classic tough nosed inside backer who comes down hill fast and, in a hurry, to blow up ball carriers as well as chase the QB out of the pocket.

Roman HC Rick Prete has overlooked and coached this team through the growth period. Last year they lost 3 games by a total of 18 points. A play here or there would have turned that 3-7 season to possibly being 7-3 with a fairly young team. Coach Prete believes that season playing with freshmen and sophomores has helped the maturation process and coupled with playing “a tremendously challenging schedule this year is the main reason they are in the title game”.  Going into this season Coach Prete did what many HS coaches would be afraid to do which was go with a freshman under center. Semaj Beals won the job in training camp due to the staff being very comfortable with his performance in the offseason and throughout camp. “He was obviously a kid that our other kids gravitate towards. He has the intangibles that you look for. We understood that it won’t be perfect and that mistakes would be made along the way, but we believe he is a special talent. I think the experience and talent in our program actually helps elevate his game as well”. Semaj has the talented and 4-star Jr. WR Tyseer Denmark (8 TD’s) to throw the ball to as well as talented Jr. WR Trey Woodley (4 TD’s) and Sr. WR Richard Mosley (3 TD’s). Protecting his blind side is mammoth LT Austin “House” Ramsey who is verbally committed to Kentucky.

The defense is led by Sr. DE Jason Patterson (9 sacks) amongst other key contributors like Tyseer and Penn State commit DE Jamiel Lyons (5 sacks). Jason has really blossomed and come into his own this season moving into a leadership role. He stated “During the offseason we worked continuously, moved guys around to find everyone’s strong suit along with a lot of team bonding with a strong emphasis put on building a brotherhood to play for one another. We also worked hard on bringing high energy & discipline daily as that’s a huge key to our success. Jason feels that “Imhotep has been a great program for years so I feel like this is the game to test us as a team and unlike many I don’t feel there is an underdog in this game because we are a great team just as they have a great team”. Jason has a few FCS offers (VMI & Delaware State) with more teams showing interest when asked what he feels he brings to a college in need of an impact player he stated “I feel I’m a versatile player & can play numerous positions in the box & can play in multiple defensive schemes. I’m a team player & will do whatever my team think is needed to win”.

Coach Prete believes that “the leadership we are getting from those guys is invaluable. We still feel like we have a young program, and that’s part of our philosophy is to stay young while gaining experience and competing. We know no matter who we play, those guys are going to bring it I think they set a great tone for our younger guys. They show other kids in the program what the daily grind is about. Not just good on field habits but also the daily life at a Catholic school. Obviously on the field we have so many guys in leadership roles that help keep this ship above water and we are grateful for that. We are excited to be competing against a great program who deserves all the praise they get. They have a great amount of talent, and they have the coaching to go along with that talent. We just want to see our kids do what we do. Play fast and physical, leave everything on the field. A lot of things snowballed in the PCL championship game, but we truly believe that we can play with anybody. We need to limit mistakes; play disciplined football and we will see what happens.
Outlook: This game has the makings of being a very physical hard hitting and action-packed matchup. Tep has run through its public league competition pretty much unchallenged but had great non-league games all on the road and got a win at McDevitt while falling just short in those other games. Roman scheduled equally great non-league competition and then had to face an elite Prep team a few weeks back in the CL red division title game. That game gave them the big atmosphere game experience needed to come into this game without the nerves. Both defensive lines are aggressive and relentless while both teams have high quality defensive backs so expect a slugfest. No score predictions once again as this truly could go either way. A huge matchup to watch is Roman Tyseer Denmark matched up with Tep’s Jr. CB Kenny Woseley II (Pitt, PSU, Georgia, Jackson State & other big time offers).