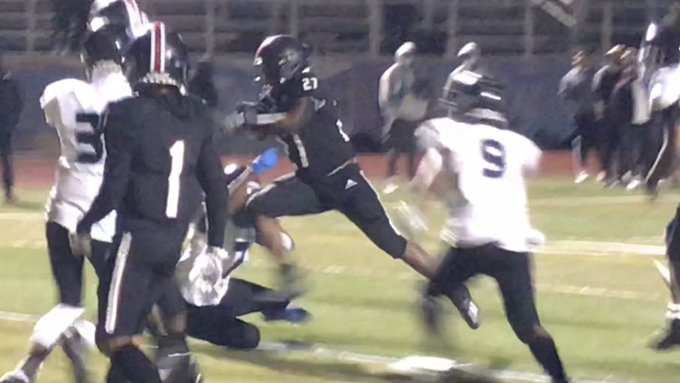 Tre McLeod darts through a crowd

It took all four quarters for Imhotep to get the win last night against a tough Olney Charter team. Tre McLeod ran the ball 12 times for 93 yards and two scores that came late in the fourth quarter as the Panthers pulled away to remain unbeaten with a 21-0 win.

“We have to start earlier and execute better. It’s just a lack of focus early on. I think they’re tryin too hard to make the plays. We have to just let the plays come to us” said Imhotep head coach Devon Johnson of his teams early game struggles. “That’s a tough Olney team and they play to the level of talent they’re facing.”

The Trojans defense played tough nearly the entire first half, holding Imhotep to a late td pass from Timothy LaSmith to Kristen McAdams from 19 yards out. The extra point failed leaving the score 6-0 until late in the fourth quarter. The drive was aided by a nice 25 yard run by “Tre” McLeod.

Olney had a chance to tie the game with a nice drive of their own to start the third quarter. Starting at their 43, the Trojans drove to the 25 of Imhotep on the legs of quarterback Michael Fayemi who had a nice 25 yard run in the drive. I was here the drive ended though when Shafeek Smith outlept an Olney receiver at the one and came down with the drive killing interception. “That was my call, I thought we could catch the sleeping but the db had nice position and made the play” said Olney head coach Mike McKeen.

Both offense stalled until midway through the fourth. That’s when McLeod took over, pounding through the Trojan defense for tough yards eventually scoring on a short TD run from three yards out. The two point pass from LaSmith to Terrance Adams made it a 14-0 game with 7:03 left to play.

The Panthers looked to keep their momentum by attempting an onside kick. They recovered and on play later McLeod delivered the final punch. Taking the ball up the middle, McLeod broke loose and headed for the sidelines, then scampered down the line going 43 yards for the final score of the game. “I just wait my turn then I executed” said the freshman back.

« George Washington Remains Unbeaten at 3-0, Have Yet To Give Up Offensive Points in Close Victory over Overbrook 6 to 2 ! @gdubeagles @GeorgePhila @Overbrook_FB @570Football
Imhotep 21 Onley 00 @OCHStrojans @TepFootball »