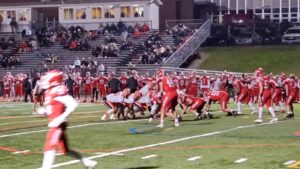 WRIGHT TWP- The verbage of bend but don’t break tends to be the outcry when it comes to defensive effort come playoff time. No more was that evident Friday night at Crestwood’s Comet Stadium as the Jersey Shore(9-0) forced three crucial turnovers and left Mountain Top with a 26-14 victory, advancing the Bulldogs to the PIAA 4A Semifinals next week against Lampeter-Strasburg at a site and time to be determined.

Jersey Shore got rolling early as they took the opening kickoff and drove 67 yards in 13 plays using up 3:38 off the clock culminating in a two yard score by Hayden Packer, but the PAT hit the cross bar leaving the score at 6-0 that would be the only score of the opening quarter.

Sophmore quarterback Noah Schultz, who was playing for injured quarterback Ryan Petrosky, for Crestwood led his team back on a 20 yard score with 8:01 left in the half, Ethan Shudak converted the point-after giving the home team the lead at 7-6.

Not to be outdone, Owen Anderson answered Schultz’s score by darting in from 39 yards out, Jersey Shore failed on the two point conversion leaving the score at 12-7 heading into the locker room.

Crestwood got the ball to start the second half and went on a 78 yard drive to the Bulldog nine, but there the drive stalled and the defense forced a Comet fumble which was recovered by Hayden Packer at the 15. On the ensuing drive, Jersey Shore extended the lead to 19-7 on a 42 yard swing pass as quarterback Branden Weary connected with Anderson in the flat, breaking a tackle, Anderson cashed in for the score with 7:01 left in the quarter.

Again, Crestwood would not go away as they drove inside the Bulldog ten, but again the defense stiffened and forced a 4th down pass to go incomplete, but the Bulldogs could not advance the ball and was forced to punt, giving the home team the ball at the Bulldogs’ 44 yard line. Schultz found the end zone on the drive from 18 yards out at the beginning on the final period to make the score 19-14.

Jersey Shore, on their next drive, pushed the ball downfield to the Comet nine, but a 4th down pass fell incomplete, but defensive back Kooper Peacock made the first of his two key interceptions in the contest, as he ran under a Schultz pass at 30 and returned it to the fifteeen. Running back Cam Allison capped off the short drive with a ten yard winding score with 3:14 left in the contest to make it 26-19.

In a last ditch effort, Crestwood moved that ball down to the Jersey Shore one yard line with under a minute left, however Peacock stepped in front of a Schultz pass in the end zone sealing the deal for the Bulldogs.

Kooper Peacock with an interception to seal the 26-14 win for @shoresports2 over @CometsFootball2 @PaFootballNews pic.twitter.com/dTkIdAUaZi

“We knew Crestwood would make some plays tonight,” Jersey Shore coach Tom Gavrish said. “We told our kids we are going to make ours as well, just keep playing. We’re just happy to get out of here with a win.” He concluded.