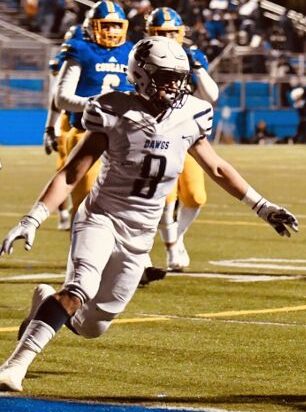 The Berwick Bulldogs have a long football history and a storied program. Many former Bulldogs have gone on to college careers, and this year is no exception. Blane Cleaver will join that long list as he committed to the Army West Program. There he’ll be greeted by another former Berwick standout, Mike Viti, who coaches the fullbacks for the Cadets. Blanes father JJ also played for the Bulldogs, winning a state title in 1992.

We caught up with Blane to ask him about his decision:

Blane: Since I was 9 years old

PFN: Why did you choose to commit to the Cadets?

Blane: The opportunities at a program like Army are endless.

Blane: I felt like it was the right decision for everyone in my life. It felt like home to me.

PFN: Who was your biggest influence at Army WP, who recruited you?

Blane: I really loved getting on the with Coach Viti and Coach Loose. They are both great men, and I felt an instant connection since the first time I picked up the phone.

Blane: Someone that is willing to put it all on the line to protect my teammates and do anything to win the game in the end.

Blane: It was very chaotic sometimes, but overall it was an amazing process.

Blane: It definitely made my decision making a little bit harder. Not being able to get onto campuses was definitely challenging.

Blane: I am considering somewhere either in engineering or business.

Blane: My parents are my role models and they helped me throughout this entire process.

PFN: What do you think is the most exciting thing about the Army program?

Blane:  Michie Stadium is one of the coolest atmosphere’s in the entire nation.

PFN: What are you most looking forward to while playing for the Cadets?

Blane: Building life long bonds with my brothers and coaches.

Blane: I used to play baseball and many people thought that was my best sport.

Blane: My father! He has pushed me very hard to be the best person on and off the field that I can be.

Blane: I am going to a program that most embodies my program in high school. I believe the style of play and the attitude has a huge similarity to my home town!