Five years ago, on April 1, we lost a legend.  This is my story of the man everyone called Coach Curry.

When George Curry came to the small town of Berwick in 1971, nobody could have envisioned what would transpire. Over the next 44 seasons (not including a break from the Bulldogs that sent him to Wyoming Valley West for 3 seasons), Curry would help keep a dying steel town alive. On a field dwarfed by a soon to be closed steel mill, Curry led the Berwick Bulldogs to 6 PIAA State Titles and ended his career in 2015 with the most victories ever by a PA high school football coach with a record of 455-102-5, with 404 of those wins coming at Berwick.

While at Berwick, in addition to those Six State Championships,the Bulldogs were named the USA Today National Champions three times; he led them to 9 undefeated seasons; produced 75 AP all-state players, 37 Big 33 players and 13 of his quarterbacks went on to D1 schools. He sent hundreds of players onto college, but it wasn’t just Berwick players like Ron Powlus, Jon Pruitt, Bo Orlando, Gus Felder, George Schechterly, Jake Kelchner and the many other Bulldogs that went on to earn college degrees. He also worked hard to help get players from teams all over the state the chance to further their education. Many times his phone would ring, and on the other end George would find a coach asking him to help one of their players move on to the next level. Two years ago at a summer all-star game, Curry told me he believes “he helped send almost 800 players on to college ball at some level saving families from all over tens of millions of dollars in education fees.” 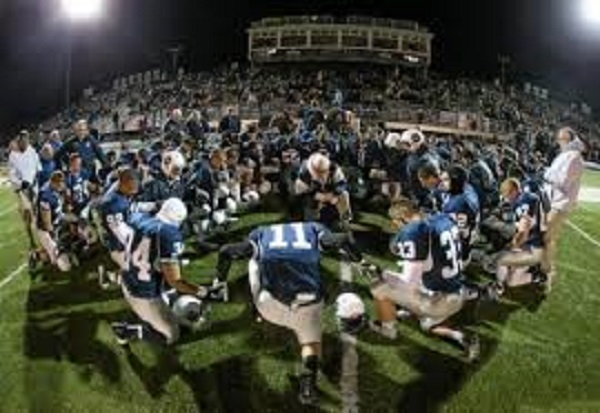 His days usually started out with a trip to St. Mary’s church in Berwick, where he was a Eucharistic minister. Coach was a very active man of the church, attending morning mass every day. He could often found helping out with fish fries and other events the church held. He also led his team in prayer before every game. 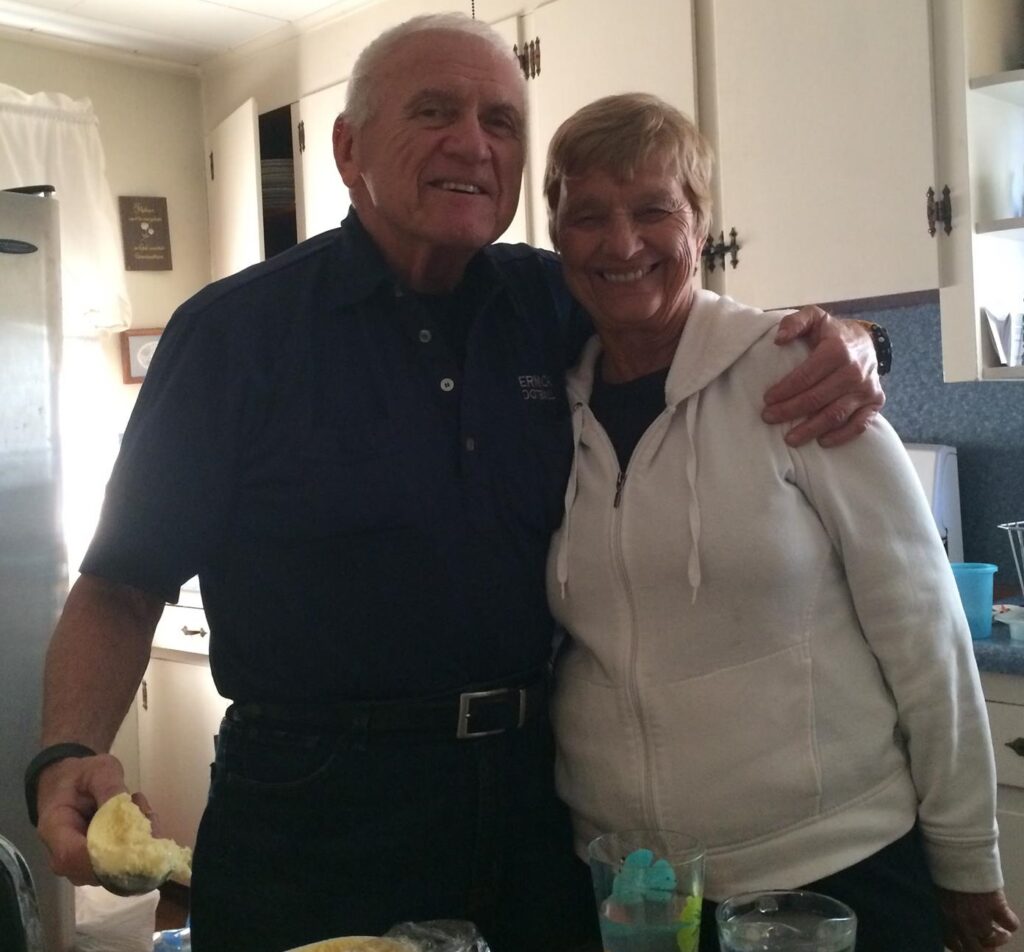 He married his wife Jackie back in 1967 I believe, during his first season coaching for Lake Lehman. She’ll tell you it wasn’t easy being George Curry’s wife, but Coach would tell you he wouldn’t have been the great coach he was without her. “I could have never done what I did with any other woman” he told me at that all-star game. “I mean, what other woman in this world would put up with me spending 16 hours a day coaching?”  He paused a moment as he watched his grandson C.J. (his son Cosmas’ boy who was QB for the East team) warming up. “That’s why I do this right there,” he said nodding toward C.J.  “I get to turn boys into men, like my grandson out there. He’s a heck of a player.” But back to Jackie, Curry went on to tell me about a game that Lake Lehman played the Thursday before he was to be married. “We had the Thanksgiving game, snowed like hell! I tried to get that game postponed but the principal there wouldn’t let me do that because he thought I’d change my wedding day if we had to move the game to Saturday. The night we got married, I had some guys over to our hotel and we watched some game film. How bout d’at?!” he exclaimed. There wasn’t a  game played at Crispin Field that you didn’t see Jackie sitting there in the stands.

His son, Cosmas, played for him in the late 80s. He went on to be selected as an All State RB in 87.  Cos would be the first to tell you that Coach was a bit tougher on him than the other players. He didn’t play favorites. That was George’s way. He was tough on everyone, but in the evenings when they were together as a family, his dad would tell him explain to him why he had to be that way, and Cos understood. His dad was the coach. He knew it had to be that way, and he was ok with that. 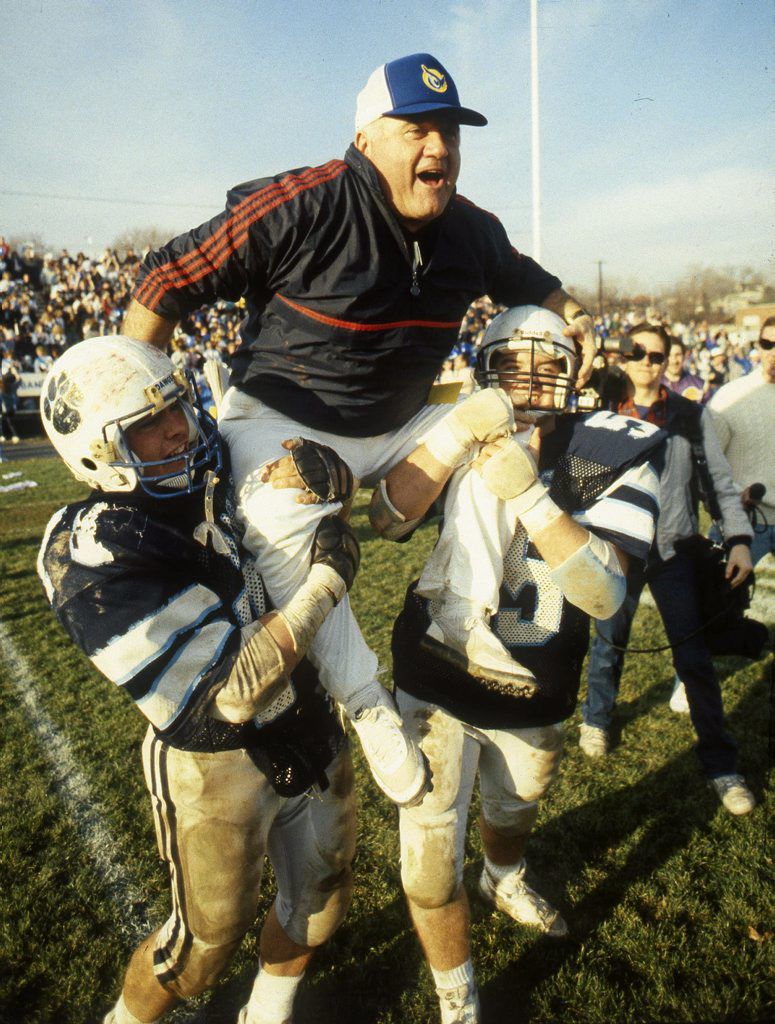 When Curry came to Berwick in 1971, the football program wasn’t anything to brag about. They weren’t having much luck holding onto coaches and only had four seasons with 10 wins or better dating back to the early ’30s. Fans got a glimpse of what was to come in 1972 when he led the Dawgs to a 10-1 record. In 1977 Curry led his team to its 2nd of many titles, winning the Eastern Conference title over Valley View enroute to a 12-1 record. (Berwick won the 1960 EC title, its first)

During the 80’s, Curry, gruff voice yelling from the sidelines in his signature camo jacket and Wise Potato chip hat, turned the Bulldogs into a powerhouse. Beginning with the 1981 season, his first undefeated team, Curry’s Bulldogs put together a string of successful seasons that included a string of 47 straight regular season wins from 1981-1985. Six Eastern Conference titles, 6 undefeated regular season teams, 3 undefeated teams for season and their first state title in 1998 and ahem, a runner up in 1989 (those Berwick fans know what I’m referencing there).

If Berwick was considered a powerhouse in the 80’s then the only other word you can use to describe the 90’s is dynasty. The Bulldogs garnered TEN conference titles, 6 undefeated regular seasons, 3 undefeated seasons, had a 41 game win streak from 1994-1997 gathering 5 State Titles along the way. 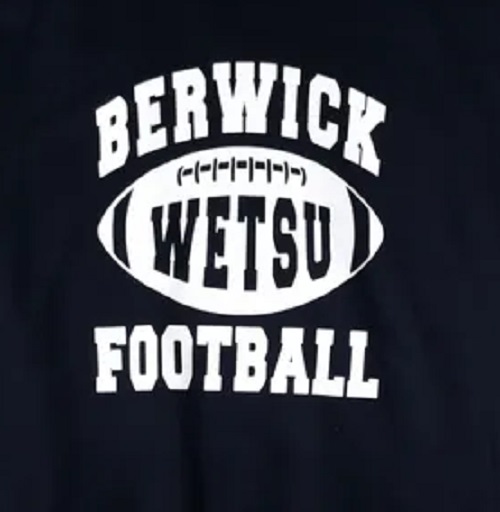 He was a man ahead of the times. His playbook was like an NFL playbook. He packed the weight room with over 100 kids regularly, that routine was one of the the first things Curry implemented when he got to Berwick. Back then, the steel mill provided Curry’s teams will all the free weights they wanted. I remember as a kid in the ’70s, I’d often follow his wife Jackie to the games, the Curry’s were my neighbors and we lived just blocks from the stadium. We’d get there and the stands would be just starting to fill, but one of the memories that sticks out was looking over the wall that separated the field from the steel mill and seeing all those guys that made those weights standing on the roof during their breaks, watching as Curry built his dynasty.

They had a tight budget in our small town. Curry was even instrumental in getting a second field house built to house the weight room that would be big enough to hold all those players. The list on the wall of the field house of all the volunteers and donors that helped in its construction. Players, coaches, fans, family members and former players all took a part in building it.

And that Wise hat? Oh, that was done on purpose. Curry was a strong believer that part of being a good coach was marketing. They got all kinds of sponsorships from local businesses to help build the team. The now-closed Bonanza Steak house and Pizza Hut provided season awards as well as local clubs like the Jaycees, Lions Club and others.  “Hey, we get all the free chips these horses need,” he once said in a TV interview. Those businesses supported the team and Curry because Curry’s teams brought people into town. On any given Friday, over 10,000 people would pile into a stadium built to hold 6,500. Those people needed a place to eat, and George helped them find food. Coach Curry was also a sometimes misunderstood man. Many thinking he was tough to get along with, insular. I guess sometimes he had to be that way with people, especially media members. He was often accused of recruiting, cheating. Heck, I followed Berwick football religiously and knew every player that came through the system through the late 70s, 80s and 90s. Only a handful in all that time actually came from out of the area. I guess that’s why he could be guarded when it came to reporters. But I saw a different person. One that cared about the town, the players and the families. To me, I saw a friend. And to be honest, I really don’t think that he was such a bad guy if you gave him a chance.…but I never saw it. I grew up just three homes away from coach. I can’t count how many times we’d be out in the alley playing touch football and he’d stop and watch on his way to the field house which was just blocks away from our homes. He’s play qb for us for a few minutes, but never had time to stay long.  “Work to do kids, see ya on the way back through. Be good and have fun” he’d say as he left.

I’ll share a story from a friend I’ve met recently. He’s a radio personality from the northwest corner of the state that just happened to room with a former Bulldog, Tony Cenimo, in college at Clarion. His name is Bob Greenburg. Here is his story:

When I was in college Tony took me too his house for the weekend. We went to watch Berwick, who was #1 in the country, play King Rice and Binghamton on Friday. It was cool to be there. Saturday morning Tony took me to George Curry’s house. We talked for an hour. I thought he was a great guy. Flash forward a decade or so. I’m broadcasting state final game, Sharon vs Berwick. On the field before the game I ask Coach Curry to do an interview. He said no I don’t have time. I said do you have time for a guy that was in YOUR HOUSE?? He said what? I told him the story and he was great to me from then on.

There are many more stories like that I could share about coach, but I think that one about sums it up. I cover football all over the state and as soon as people hear I’m from Berwick they always share their stories about encounters with him. John Franco, former Tyrone coach, liked to always share that Curry would claim “he taught him everything he knew about football.”  They were mostly good stories. Maybe I’m biased because I grew up as his friend, but I think some of that perception is because some people didn’t get to actually see the person we did as Berwick residents. My next door neighbor, Gloria, would often hold conversations with the coach when he was on his daily walk to the field. He’d stop, listen to her giving him an earful about what he should be doing with the team, then he’d be on his way to practice or the game. George Curry was more than just a football coach. He was a family man, a father, husband, grandfather, leader, devout christian and friend to many. He touched the lives of thousands. There will never be another like him.

On May 30 Coach Curry will be inducted into the PSFCA Hall of Fame. While on this earth, George refused to be allowed to be named to the Hall. We hope he doesn’t mind.