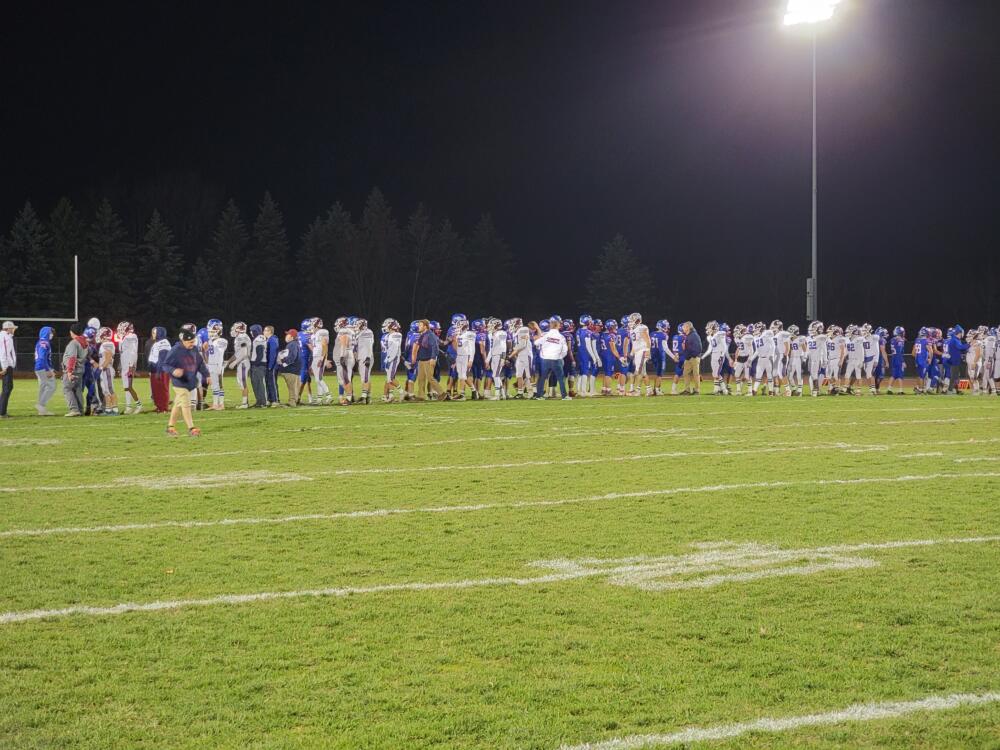 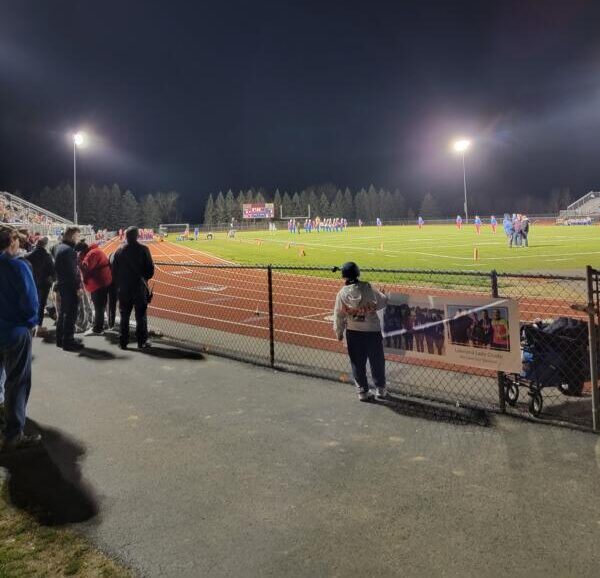 A breezy night up at Lakeland Stadium was the scene for the District 2 Class 2A Championship, a rematch between the 8-3 Dunmore Bucks and the 11-0 Lakeland Chiefs.  Lakeland had already defeated Dunmore 55-14 on the road earlier this season, and many thought this game might be over early.

Apparently they were mistaken, as this one would go down to the wire.

Lakeland took the opening kickoff at their own 20 and after a short gain on 1st down it was QB Dominico Spataro hitting his favorite target, TE Lacota Dippre, for a nice 13 yard gain.  Spataro also ripped off runs of 9 and 43 yards on the drive and capped it with a 5 yard TD run that made it 7-0 Lakeland with 6:38 left in the 1st quarter. 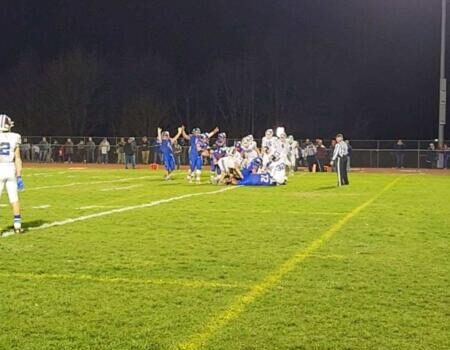 Dunmore then started on their own 34 and stalled at the Lakeland 42 after 2 False Start penalties hampered the Bucks momentum.  A great punt by Dunmore P Nicholas Pierro pinned the Chiefs at their own 10, and on 1st down Spataro was sacked for a 7 yard loss.  Lakeland would escape the bad field position when Spataro hit RB Evan Pochas for a 20 yard reception, followed immediately by a big 35 yard catch and run by Dippre.

As the 1st quarter ended, Lakeland was driving at the Dunmore 31.  2 plays later, Spataro would connect with WR Jon Seamans for a terrific 34 yard TD catch to make it 14-0 Lakeland with 11:03 left in the half. 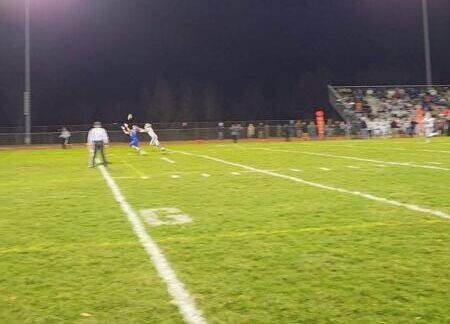 The Bucks then got great field position at the Lakeland 41, but disaster struck when QB Thomas Bowen’s backward pass turned into a fumble that was recovered by Dippre for the Chiefs.  Taking over at their own 40, the Chiefs drove to the Dunmore 22 and were stunned when a fumbled snap was recovered by the Bucks.  The teams then traded 3-and-outs before Dunmore would develop a nice drive aided by a Lakeland pass interference penalty.  Unfortunately, the drive was spoiled when Dunmore K Max Hunt missed a 32 yard FG attempt with only 9 seconds left in the half.  The Chiefs would lead at halftime, 14-0.

Dunmore would open the second half on their own 32 with a several short runs, and then Bowen hit WR Domenick Desando for a nice 36 yard reception.  Bowen and RB Nico Ruggiero tried running the ball but the Chiefs defense stood tall.  On a 3rd and 7 from the Lakeland 29, Bowen appeared to hit Desando for a TD reception but the catch was ruled out of bounds and a 4th down pass was incomplete.  Lakeland then took the ball and gained only 2 yards, but a nicely executed fake punt by Dippre turned into a 54 yard run to the Dunmore 15.  The Chiefs would then score 3 plays later on a 2nd TD run for Spataro, and after a missed PAT it was 20-0 Lakeland with 8;17 to go in the 3rd quarter.

Dunmore could not get anything going on their next drive and punted back to Lakeland.  The Chiefs took over at their own 20 and worked their way down to the 33 of Dunmore, aided greatly by a Spataro pass to Seamans for 24 yards on a 3rd and 6 on their own 24.  On 1st down from the Dunmore 33, Spataro would run for 6 yards but would be injured on the play and would not return.  2 plays later, Dippre would fumble and the Bucks’ Desando would recover the ball and return it 68 yards the other way for a Dunmore TD.  With the score now 20-7, Dunmore was starting to gain momentum with 3:02 left in the 3rd quarter. 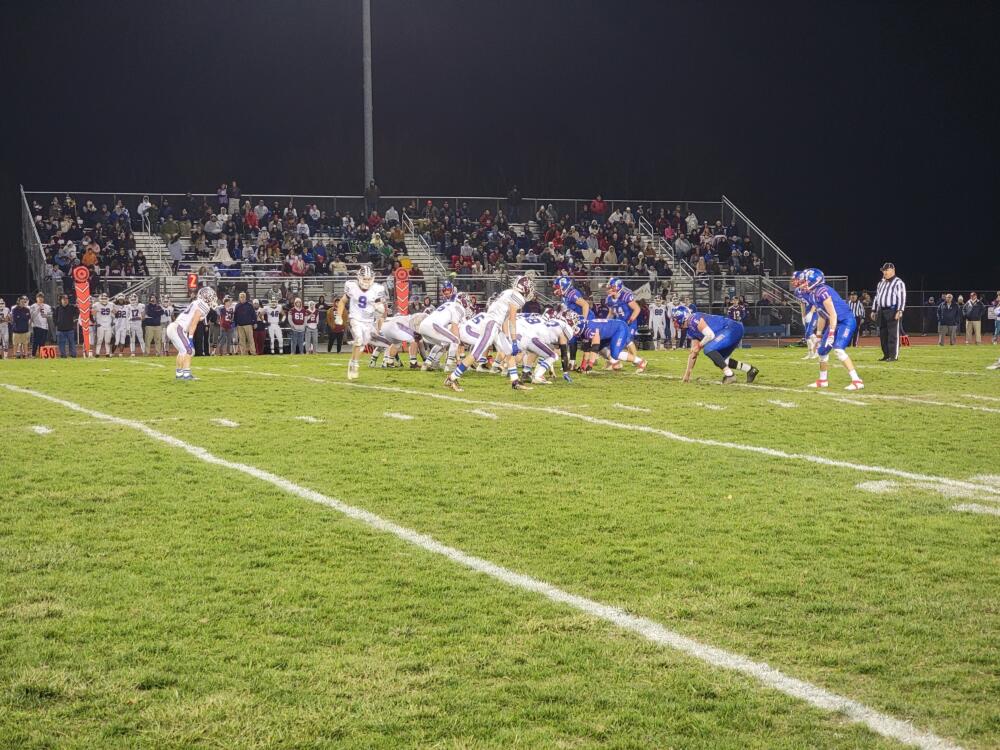 Lakeland would begin their next drive on their own 23, and the Chiefs sent in QB David Naniewicz for the injured Spataro.  Pochas had a nice run for 29 yards to get the ball moving, but several big stops by Dunmore and a near interception by DB Daniel Pigga appeared to slow Lakeland.  Unfortunately, the Bucks committed 2 critical penalties to keep the drive alive to end the 3rd quarter.  The Chiefs would then stall at the Dunmore 31 yard line and turn the ball over on downs to start the final quarter.

Dunmore would put together a time consuming drive to get to the Lakeland 34, and then a clever Bowen pitch to Ruggiero turned into a HB pass for 30 yards to Pigga to give the Bucks new life and a 1st and goal at the Chiefs 4 yard line.  Lakeland made a valiant stand and kept the Bucks out of the end zone when a 4th down pass to RB Jacob Hickey was short of the goal line.  Lakeland took over at their own 2, and Dunmore pressured and almost had a pick-6 followed on the next play by a near miss on a Safety.  On 3rd down, Naniewicz threw an costly interception that was returned to the 3 yard line by Dunmore.  Bucks QB Thomas Bowen would then score 2 plays later on a 1 yard QB sneak to make it 20-14 with only 3:31 left in the game.

Lakeland would recover an onside kick at their own 48, and after 2 nice runs by Pochas and good use of timeouts by Dunmore it was a critical 4th and 5 for Lakeland at the Dunmore 36.  Disaster then struck the Bucks again when they were flagged for 12 men on the field, giving Lakeland a 1st down.  A 14 yard run for another 1st down by Dippre sealed it for the Chiefs, who emerged victorious 20-14 and were crowned District 2 Class 2A Champions.

Dunmore ends the season at 8-4, while Lakeland improves to 12-0 and will advance further into the State playoffs.