It was a very cold and windy Friday night up at Pen-Fed Field in Scranton that greeted the visiting Neumann-Goretti Saints as they arrived to face off against the Scranton Prep Cavaliers.  The weather played a big factor in tonight’s game as a snow squall blew in during the National Anthem, and you could tell there was going to be a battle on the field.

That battle turned out to be Shawn Battle.

The Saints RB finished with an unofficial 217 yards rushing and 2 TD’s.  He also had a big interception on defense to help lead the Saints past the Cavaliers 22-14 in a game that was a thriller throughout the entire contest.

After an game-opening possession 3-and-out by the Cavaliers, the Saints had the ball at their own 36 but only managed to gain 4 yards in 3 plays.  The crowd was then stunned when the Saints went for it on 4th and 6 deep in their own end and QB Mekhi Wharton’s pass was incomplete.  The Cavaliers then took full advantage of the great field position with QB Louis Paris hitting WR Aidan Colleran for a nice 23 yard gain, and capped the drive with a Paris-to-Colleran 3 yard TD pass.  With 6:48 left in the 1st quarter, the Cavaliers led 7-0. 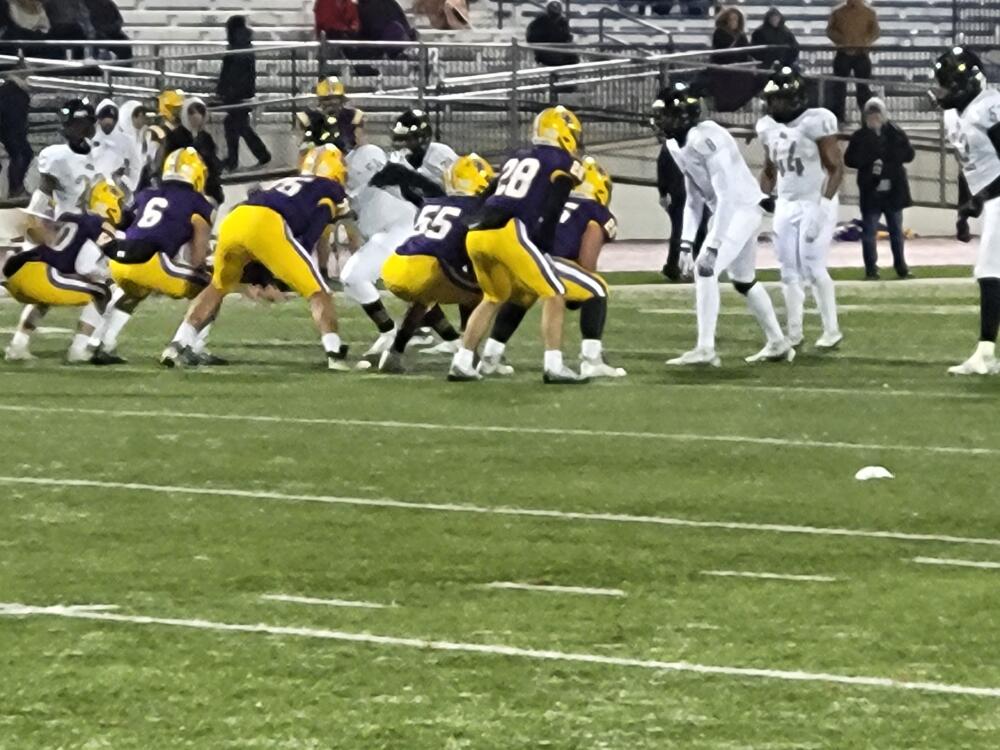 The Saints were not to be outdone though, and they got a nice kick return to start at their own 47.  RB Shawn Battle then started to roll with several nice runs of 8, 13 and 19 yards.  He capped the nice drive with a 2 yard TD run and ran in the 2 point conversion to make it 8-7 in favor of the Saints with 3:40 to go in the 1st quarter.

Scranton Prep then started on their own 27, and on 2nd and 8 from the 29 Paris again hit Colleran for a big play–a 42 yard catch that set up the Cavaliers at the Saints 32.  On the next play, Paris hit Colleran again for 24 more yards to give the Cavaliers 1st and goal at the Saints 8.  However, on 4th and goal from the 4 it was Paris who tried to run it and was hit for a 2 yard loss and a turnover on downs.

The Saints started at their own 6, and Battle immediately ripped off a nice 30 yard run as the 1st quarter ended.  Starting the 2nd quarter, the Saints began to get a bit sloppy with penalties, one of which negated a huge 52 yard run by Battle.  The drive stalled and the Cavaliers started their next outing at their own 36.  After a short 1st down gain, Paris again hit Colleran for a nice 25 yard catch and run to the Saints 38.  However, disaster struck on the next play when Paris’ pass was intercepted by Saints DB Yasir Williams and returned to the Saints 38.

The Saints rested Battle for a bit on their next possession, and it was RB Terrance Page toting the rock and gaining some tough yardage to keep the drive going.  WR Anthony Zungolo had a nice 17 yard reception to move the ball down to the Cavalier 30 yard line.  Page rushed the ball on the next play and was stopped immediately, but a personal foul on the Cavaliers gave the momentum right back to the Saints.  A nice 10 yard catch by WR Denim Smith gave the Saints 1st and goal at the Cavalier 6, and then it was Wharton hitting WR TyJuan Beverly for a 6 yard TD catch.  The 2 point conversion was no good, and with 4:07 to go in the 2nd quarter it was the Saints now leading 14-7.

The Cavaliers started on their own 38 but were intercepted on 3rd down by Saints DB Kyan Johnson.  The teams then traded 3-and-out drives.  The Saints would start the final drive of the first half on their own 45, and after an incomplete pass on 1st down it was the Saints big-play WR Denim Smith who came out of the game injured and went into the locker room.  The Saints’ drive ended on an incomplete pass as time expired in the first half. 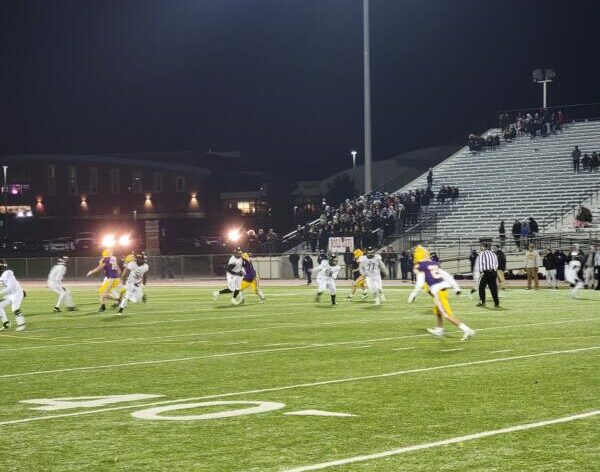 The injury to Smith would be a factor in the 2nd half for the Saints as they were forced to rely more on their ground game to move the ball.  On the first possession of the second half, the Saints had a drive that was hampered due to 2 costly penalties.  They did manage to use Battle effectively on the drive as he had 5 runs totaling 49 yards, but on a 2nd and 9 from the Cavalier 20 he ran for 9 yards and then fumbled the ball into the end zone where it was recovered by the Cavaliers for a touchback.

After a 3-and-out by the Cavaliers followed by a very bad punt that netted only 3 yards, the Saints were in good shape at the Cavalier 40.  Two plays later, a key injury occurred to the Cavaliers Aiden Colleran that would prove very costly.  The Saints drove down to the Cavalier 15 but would end up fumbling again inside the Cavalier 10 yard line.  The Cavaliers again could not gain any yards on their next drive and would get a better punt this time that pushed the Saints to their own 36.

The Saints would again give the ball to Shawn Battle and Terrance Page but turned the ball over when Battle was stopped for no gain on a 4th and 3 at the Cavalier 9.  The Cavaliers could not move the ball much on their next possession, and as the 3rd quarter ended they were preparing to punt.  After that punt was downed at the Saints 49, they would then get bit by the penalty bug as they committed back-to-back false starts which pushed them back further to their own 41.  After a near interception on 2nd down at their own 41, the Saints fooled the Cavaliers as they executed a quick kick on 3rd down and were able to pin the Cavaliers down at their own 8. 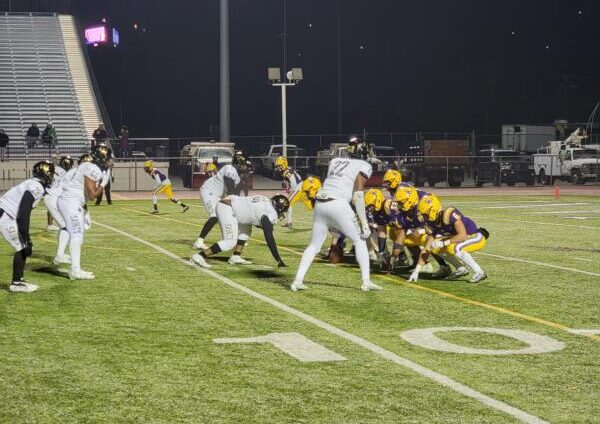 After a run for no gain and an incomplete pass, Paris’ next pass was intercepted at midfield by Shawn Battle and returned 24 yards to the Cavalier 26.  The Cavaliers would then make a big stand on defense with a deflected pass that fell incomplete and a sack of Wharton on 4th down for a loss of 7 yards.  The Cavaliers then took over at their own 33 and it was RB Quenten Palermo who ripped off runs of 7 and 8 yards.  After a holding penalty practically negated those gains, Paris hit WR Andrew Summa for a big 33 yard gain that was additionally aided by a Saints targeting penalty.  The Cavaliers were in business at the Saints 18 yard line, and it was a run by Paris for 6 yards, a run by Palermo for 6 yards and then a bruising 6 yard TD run by Paris.  The crowd erupted after the score, and with the PAT the game was knotted at 14 with only 5:52 left in the 4th quarter.

On the ensuing kickoff, what appeared to be a stunning 83 yard kickoff return for a TD by Battle was negated by a holding penalty.  Starting at their own 22, the Saints used the clock wisely on an 11 play drive mainly featuring Battle, who capped it with a 1 yard TD run with 53 seconds to go.  The 2 point conversion was good to make it 22-14.  A great kick return by the Cavaliers set them up at their own 46 with 43 seconds on the clock and 1 timeout left.  On the very next play however, Paris’ pass was intercepted by the Saints to seal the win.

Scranton Prep ends the season at 9-4.  Neumann-Goretti improves to 8-3 and advances to the next round of the PIAA Class 3A State Playoffs.  You can visit our bracket page here:  https://pafootballnews.com/brackets/