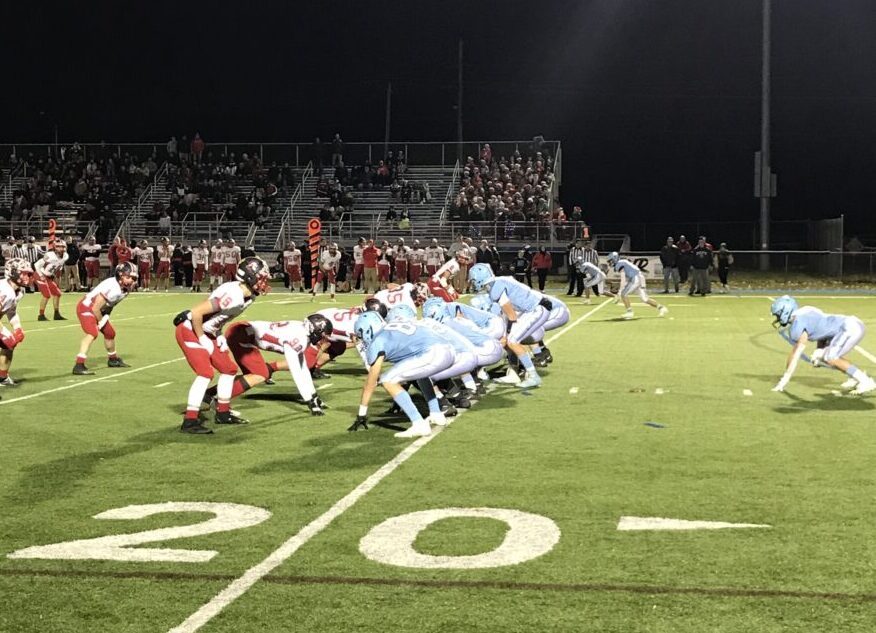 North Pocono advances to the 4A Title Game

North Pocono’s gameplan according to their head coach Greg Dolhon is to mix in the run and passing games together. However, on this night, the run game did so well that they stuck to it. “We usually can throw the ball, our QB is great. Instead of having him throw, we had him run the ball.” Dolhon said. Senior QB William Soma rushed for 167 yards and junior RB Michael Blaine rushed for 152 yards as North Pocono took down Dallas 41-26 to advance to the District 2 4A Championship game.

Dallas started off with the ball and got a first down early on a pass from Jackson Wydra to Joe Peters for 11 yards but a holding call on the next play derailed the drive and forced a punt. North Pocono got great field position on the punt at the Mountaineer 41 yard line. On the first play of the Trojans drive, the running back went back to Soma on a flea flicker as he found Danny Smith on a perfect pass to the end zone for a 41 yard touchdown and led 7-0 with 10:07 remaining in the first quarter.

The Mountaineers went three and out on the next drive. North Pocono got another drive with great field position at the Dallas 43 yard line. It took three plays for the Trojans to find the end zone as Soma dodged defenders and broke tackles for a 22 yard score and a 14-0 lead with 8:05 remaining in the first quarter.

The Mountaineers answered on their next drive as they went 13 plays ending with a Parker Bolesta three yard touchdown run to cut the North Pocono lead to 14-7 with 3:16 remaining in the first quarter. As it looked like Dallas had some momentum, the Trojans took it back on the kick return as they returned it to midfield. It took five plays and ended with Korry Eisley scoring from 13 yards out for a 20-7 North Pocono lead with 1:01 remaining in the first quarter.

Wydra went to Joe Peters for 15 yards on second and 6 as the first quarter came to a close. Second play of the second quarter, Wydra found Rocco Ormando for a 36 yard completion to the North Pocono 22 yard line. Bolesta would finish the drive four plays later with his second score of the game from one yard out and cut the Trojan lead to 20-14 with 10:07 remaining in the second quarter.

North Pocono drove down the field to the Dallas 36 yard line facing a fourth and 7. Soma went for 12 yards to keep the drive going. They faced a third and 11 and Soma went for 16 for a first and goal. Eisley scored his second touchdown of the game from two yards out to make it 27-14 with 2:30 remaining in the second quarter. Dallas got a great return by Zach Paczewski on the ensuing kickoff all the way to the North Pocono 30 yard line. The drive ended on an interception by Soma as we headed to halftime.

“North Pocono is a heck of a football team and that game was won in the weight room.” Dallas head coach Rich Mannello said. “I’m proud of the seniors. It was a great year and they wrote a heck of a book as a class. It was a special group.” Dallas ends their season at 8-3. North Pocono will take on Valley View next Friday night for the District Championship at Valley View.