It was a sunny but cold afternoon at Dunmore Veterans Memorial Stadium where the Northern Lehigh Bulldogs came in with an 11-1 record to face the 8-3 Lackawanna Trail Lions in the Sub-Regional round of the Class 1A PIAA State playoffs.  Both teams came in featuring a solid running attack and state playoff experience.

On the opening drive, the Bulldogs used a mix of RB Izaiah Ramos, QB Nick Frame and RB AJ Jimenez as they made it to their own 43 before the drive stalled.  The Lions got decent field position at their own 30 after the punt, but could only gain 14 yards before a bad snap on the punt attempt gave the Bulldogs the ball back deep in Lion territory at the 32 yard line.  Frame ripped off a nice 19 yard run, followed by 2 Jimenez runs that made it 1st and goal at the 3.  Ramos then hit paydirt on a strong 3 yard TD run, and after a failed 2 point conversion it was 6-0 with 2:06 left in the 1st quarter.

On the next possession, Lion RB Demetrius Douglas had a great kick return out to the Lackawanna Trail 45 yard line.  The Bulldog defense stood tall and forced a 3-and-out as the 1st quarter expired.  Starting the 2nd quarter at their own 27, the Bulldogs started with an inside jet sweep reverse to Ramos that gained a whopping 49 yards down to the Lion 24 yard line.  The Bulldogs then methodically used runs by Ramos, Jimenez and Frame to move the ball to the 10 of the Lions, and Frame called his own number on 2nd down to score up the middle on a 10 yard TD run.  The 2 point conversion was then run in by Jimenez, and with 9:16 to go in the 1st half it was Northern Lehigh with a 14-0 lead. 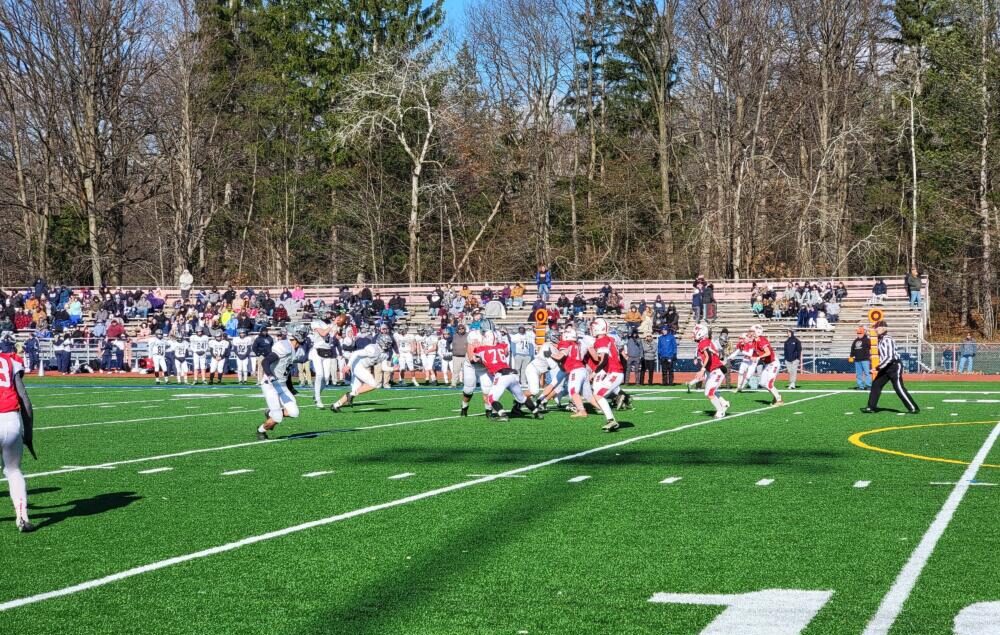 The Lions would get another good kick return to their own 45 yard line.  On their very first play of the drive, it was RB Hunter Patterson busting through the line and breaking free from all Bulldog defenders as he ran it for a 55 yard touchdown.  The PAT was good, and with 8:58 to go in the 1st half it was now 14-7 in favor of the Bulldogs. 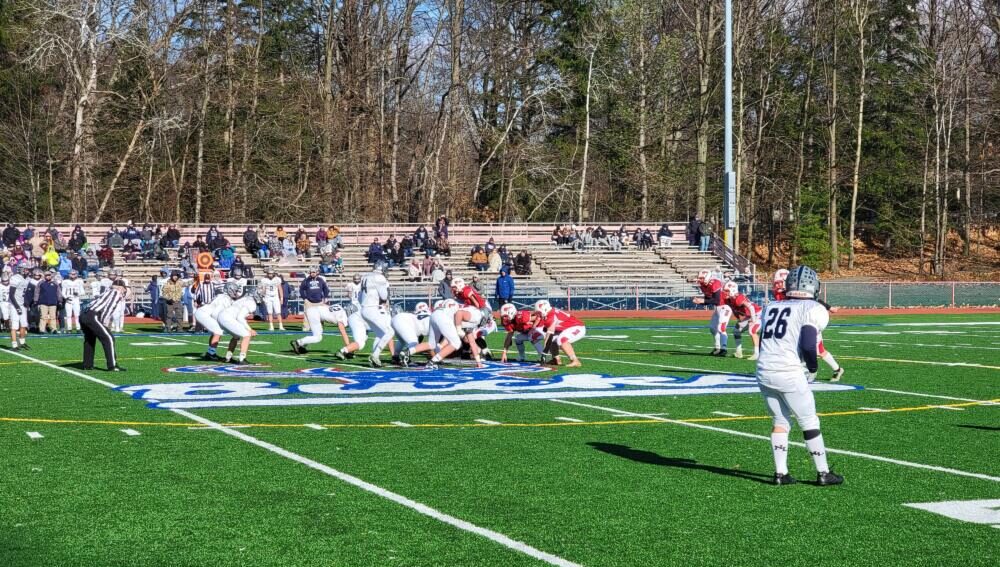 Northern Lehigh started on their own 40 and seemed to stall, but on 3rd and 4 from the 46 it was another Ramos sweep reverse that gained 14 yards and kept the drive going.  Jimenez had runs of 10 and 5 yards, and Ramos had another 6 yards to get to the 21.  On the next play Ramos sprinted for a 21 yard TD, and with the PAT it was 21-7 Bulldogs with 4:30 left in the half.

On the ensuing drive, the Bulldogs struck again when Lion QB Stephen Jervis’ pass was intercepted by DB Bailey Smith of the Bulldogs and was returned to the Lion 43 yard line.  The Bulldogs would then get 2 nice runs by Jimenez and RB John Abidelli which brought them to the Lion 21.  Frame then hit Ramos on a beautiful wheel route pass and catch down to the Lion 1 yard line.  Abidelli then punched it in from 1 yard out, and with the PAT no good it was a 27-7 lead for Northern Lehigh.  With only 36 seconds left in the half, the half was effectively over. 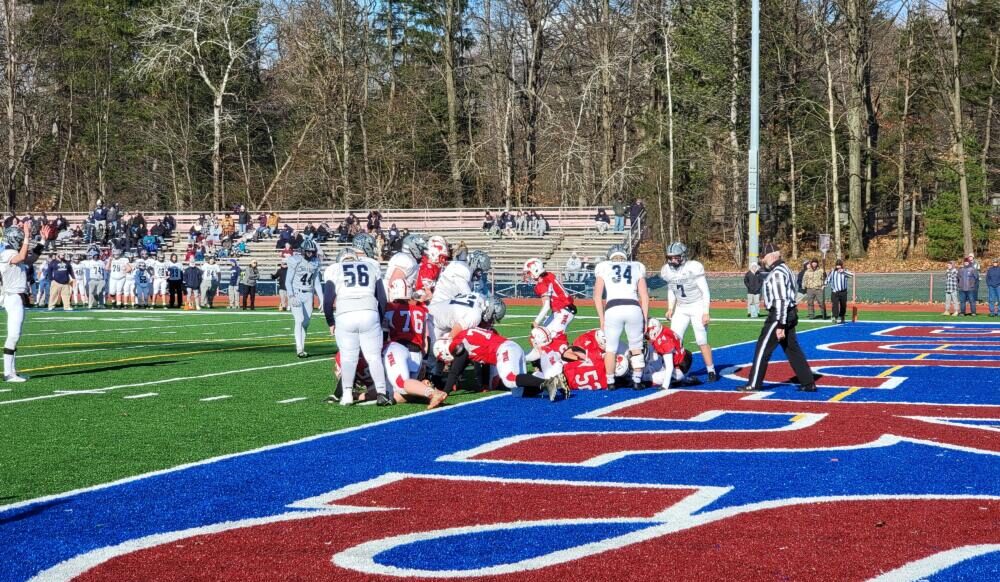 Lackawanna Trail took the 2nd half kickoff and a penalty cost them on what was another good kick return.  Starting at their own 29, the Lions got a nice 15 yard run by RB Lukas Gumble but could only move the ball to their own 46 and had to punt.  Norther Lehigh took over at their own 38 and it was all QB Nick Frame as he completed 2 passes for 19 yards and had 3 runs including a crushing 37 yard TD run that increased the lead to 34-7 with 5:30 left in the 3rd quarter.

The Lions had a huge kick return by Douglas of 57 yards to the Bulldog 37 yard line, but were stopped on a 4th and 1 at the 28.  A personal foul from the 4th down stop on the Bulldogs pinned them back to their own 14.  They would then embark on a lengthy 14 play drive that would exhaust the rest of the 3rd quarter and a chunk of 4th quarter time as well.  On the drive, RB Jack Tosh would run 4 times for 29 yards, and the trio of Frame – Ramos – Jimenez did the rest as they drove down to the 3 yard line of the Lions.  Jimenez then ran it in for a 3 yard TD, and after a failed 2 point attempt it was 40-7 with 7:34 to go. 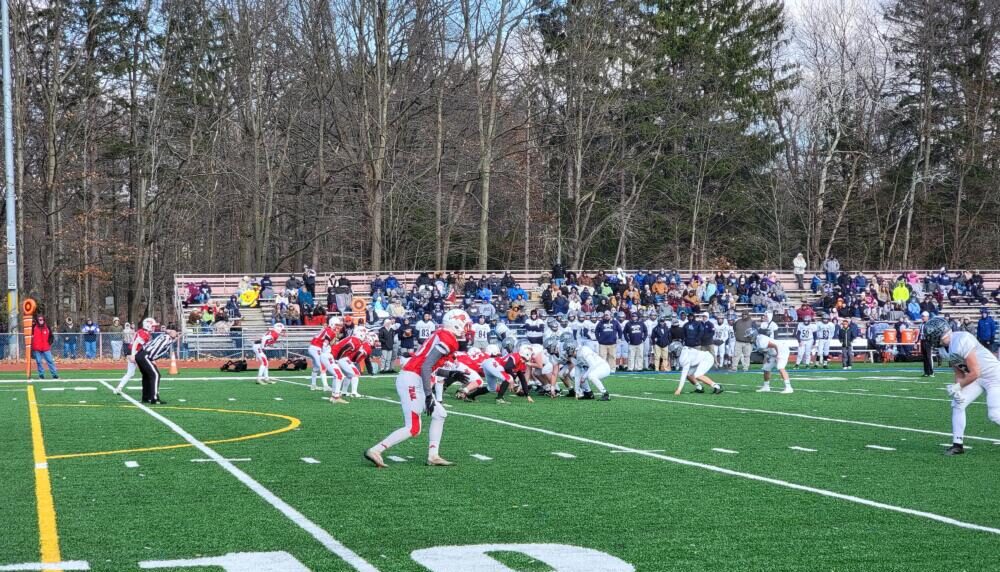 The Lions couldn’t get anything going on the next drive that lasted only 4 plays and 9 yards, and after they turned the ball over on downs, the Bulldogs used their running game to exhaust the clock and came away with the 40-7 victory.

Lackawanna Trail finishes their season at 8-4.  Northern Lehigh improved to 12-1 and will face Steelton-Highspire in next week’s PIAA Class 1A State quarterfinal round.  Check out the updated state playoff brackets here:  https://pafootballnews.com/brackets/