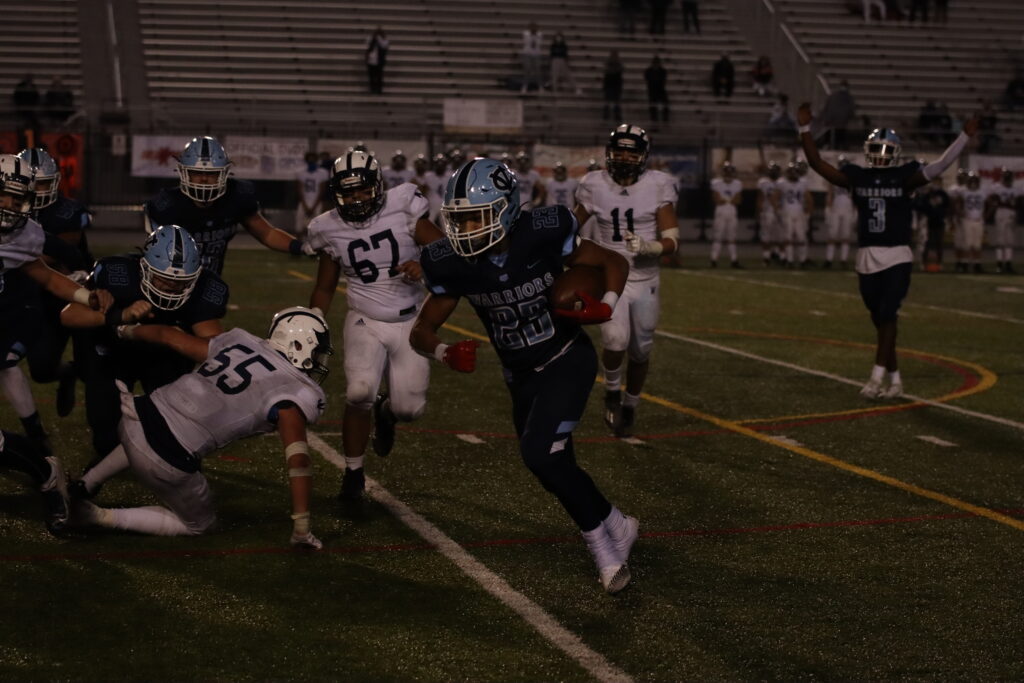 The Central Valley Warriors returned to Hersey for the second year in a row and this time and after a heartbreaking 21-14 loss last year, they have beaten the Wyomissing Spartans to capture the PIAA 3A State Title by a score of 35-21. The biggest difference in tonight’s game was the Warrior rushing attack which finished with 231 total yards with 4 rushing scores. Leading the rushing attack was Landon Alexander who finished with 23 attempts for 120 yards and two touchdowns.

The title wasn’t easy for the Warriors to capture. To open the game Wyomissing used 17 plays and 8 minutes off the game clock for Aidan Cirulli to nail a 40-yard field goal giving the Spartans a 3-0 lead with just 3:55 seconds to go in the first quarter. The Warrior’s opening drive was short and was forced to punt. On the kick Spartans, Jordan Auman came through and blocked the kick giving the Spartans great field position at the 28-yard line. The Warriors defense held strong and forced another Cirulli field goal this time from 44 yards out. The kick was good, pushing the Spartan’s lead to 6-0 with 41 seconds to go in the first quarter.

To start the second quarter both teams had possession of the ball but were forced to punt. The Warriors had possession of the ball inside Spartan territory and on a fourth down and 18 to go. Warriors quarterback Ameer Dudley dropped back and hit receiver Jayvin Thompson and he took it 18 yards for the Warriors touchdown. The point-after attempt by Serafino DeSantis was good, giving the Warriors a 7-6 lead with 5:07 to go in the second quarter. The Spartans would use their next possession to try and take the lead before halftime. On a third and goal from the three-yard line. Zach Zechman rolled out and found Darren Brunner for the three-yard score. The two-point conversion by Evan Niedrowski was good making the score 14-7 going into halftime. 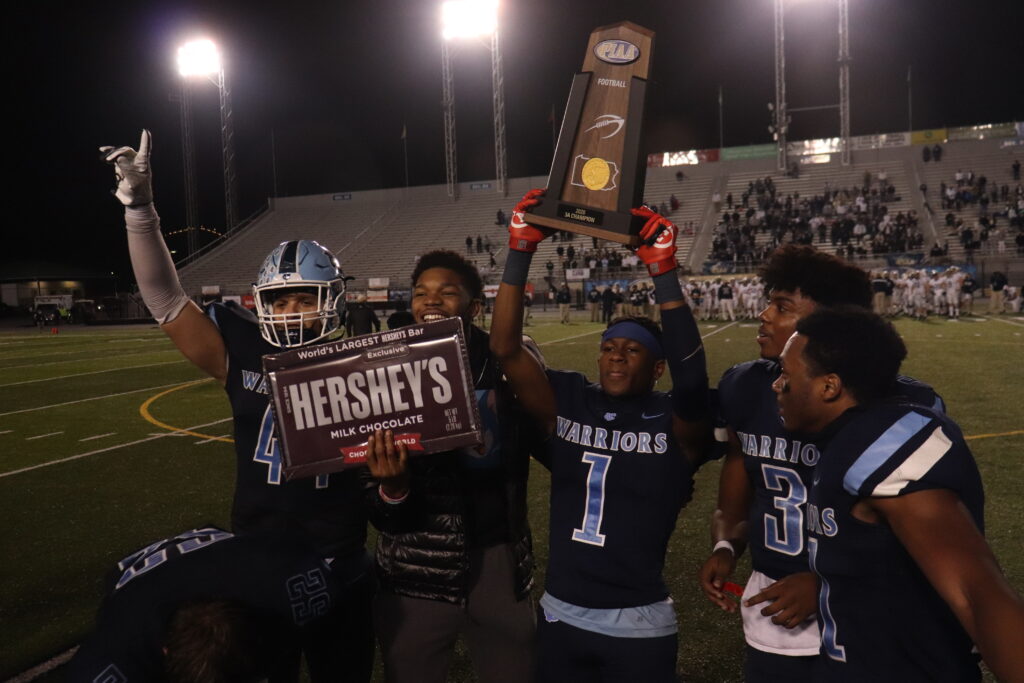 During halftime, the Warriors were down and in the locker room Myles Walker had a simple message for his team: “ I told all my guys at the half, we have to turn it up, especially for the Seniors.” And the Warriors did just that. In the second half, the Warriors would score 28 points and force two turnovers. Warriors defensive back Brandon Graham was the one with the two interceptions and he said “ We went into halftime and coach told us we need to make adjustments to put us in a better position to win.”

To start the second half the Warriors received the ball and Bret Fitzsimmons returned the kick 36 yards down to the Spartans 33-yard line. There was a personal foul on the return pushing the ball to the 18-yard line. The very next play Alexander would rush in from 18 yards out. The point-after attempt by DeSantis was good, making the score 14-14 just one play into the third quarter. The Spartans would look to answer on the following drive but the Warriors defense held and forced another Cirulli field goal attempt. The 41-yard attempt was no good keeping the score 14-14.

The Warriors would take advantage of the missed kick. Dudley dropped back and delivered a dime to Walker for a gain of 41 yards to the 27-yard line. Walker commented on the play saying, “ My quarterback Ameer Dudley threw me a perfect ball and all I had to do was reach out for it.” Just four plays later Amarian Saunders took the ball into the endzone from two yards out. Ben Walmsley’s point-after attempt was good, making the score 21-14 with 6:14 to go in the third quarter.

Warriors head coach Mark Lyons was asked if taking the Spartans out of the game in the second half was something he wanted to do. Lyons said, “ Yeah absolutely, we felt if they have to play catchup and throw the ball, I mean, I don’t think that’s what they’re built on. They’re built on the wing t wanting to run the ball.”

To start the fourth quarter the Spartans had possession of the ball and a first down after a costly penalty from the Warriors on the previous play. On second down the Warriors got to Zechman for a sack and the very next play Graham would get his first interception giving his team the ball at the 41-yard line. Dudley would take the ball on a keeper for a huge gain of 39 yards to the 14-yard line. And again just four plays later Saunders punched the ball in from two yards out. DeSantis nailed the point after attempt pushing the Warriors lead to 28-14 with 7:18 to go in the game. The Warriors had no time to celebrate the touchdown as the following kickoff Auman took the ball 77 yards for the Spartan touchdown. Cirulli nailed the point after attempt making the score 28-21 with 7:04 to play. 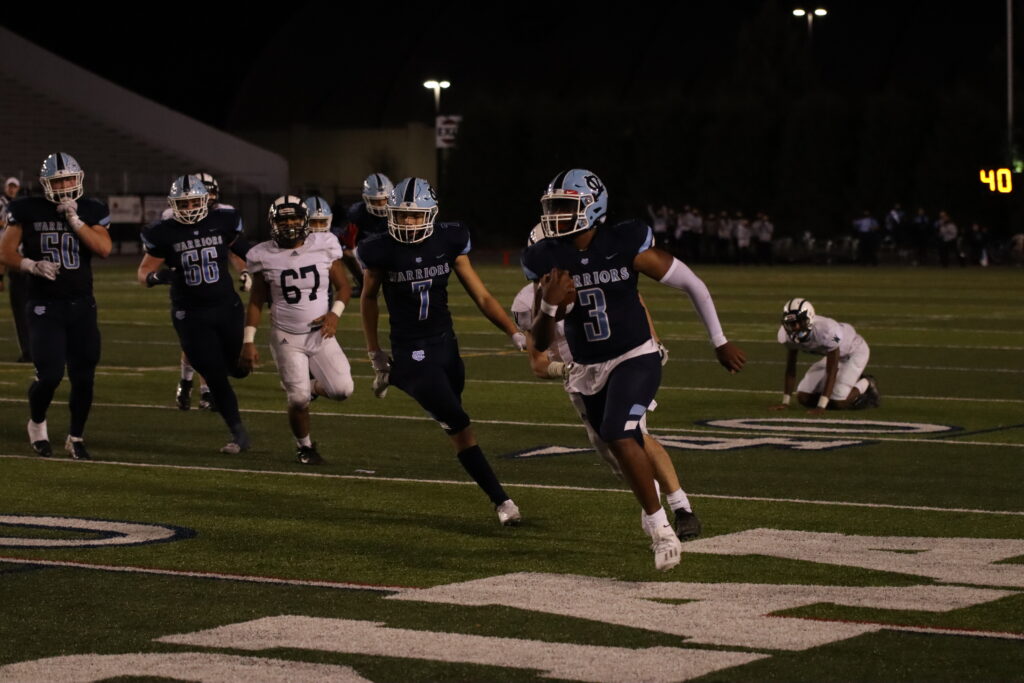 The Warriors were driving on the Spartan defense and on the 9-yard line they forced a fourth and short attempt. Dudley came up to the ball and used a hard count to force the defense to jump offsides. The very next play Alexander bounced outside and into the endzone from four yards out for the Warriors touchdown. Walmsley came in for the extra point and nailed it making the score 35-21 with 2:32 to play. On the Spartan’s next drive Graham would get the game-sealing interception and returned it to the 32-yard line. The Warriors would fumble the ball with a Spartan recovery but it was too late. The game ended with a Spartan kneel and making the Central Valley Warriors the 2020 PIAA 3A State Champions.

And @warriors_cv is your 2020 @PIAASports class 3A champion! The final score 35-21. Another quality state final!! pic.twitter.com/rE75EtA8nQ