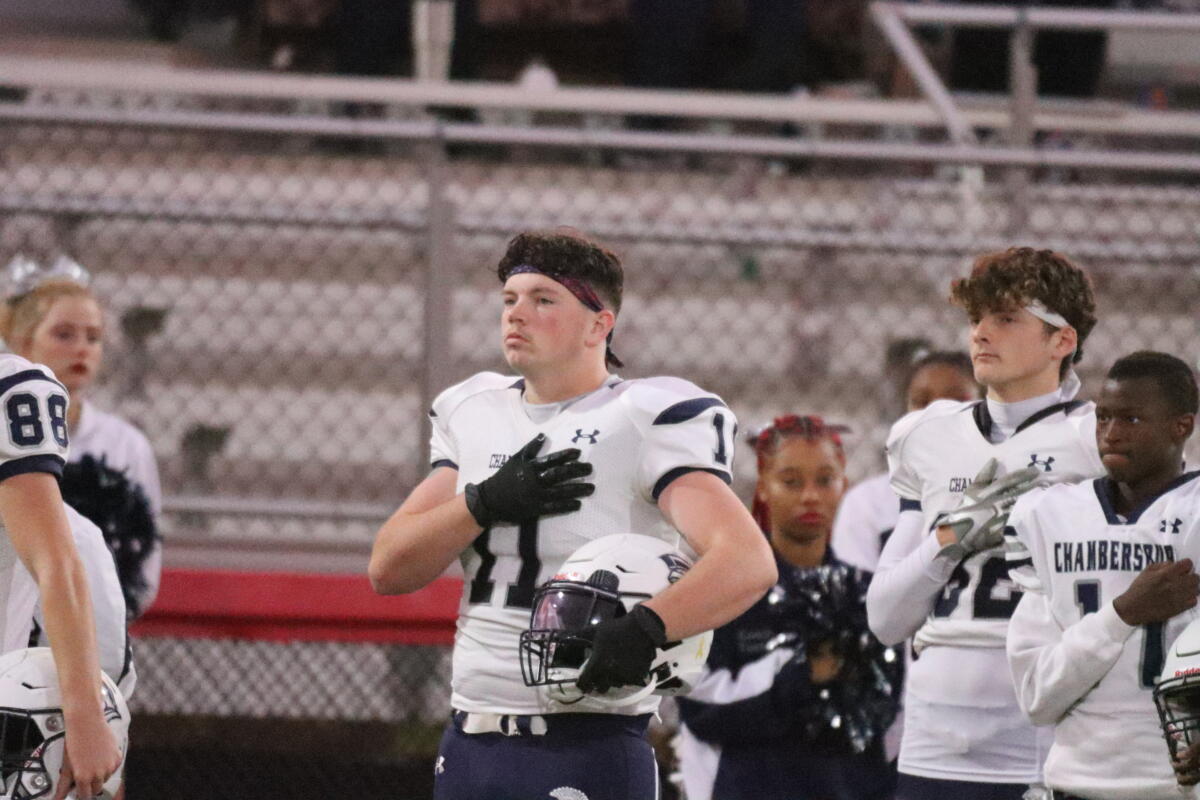 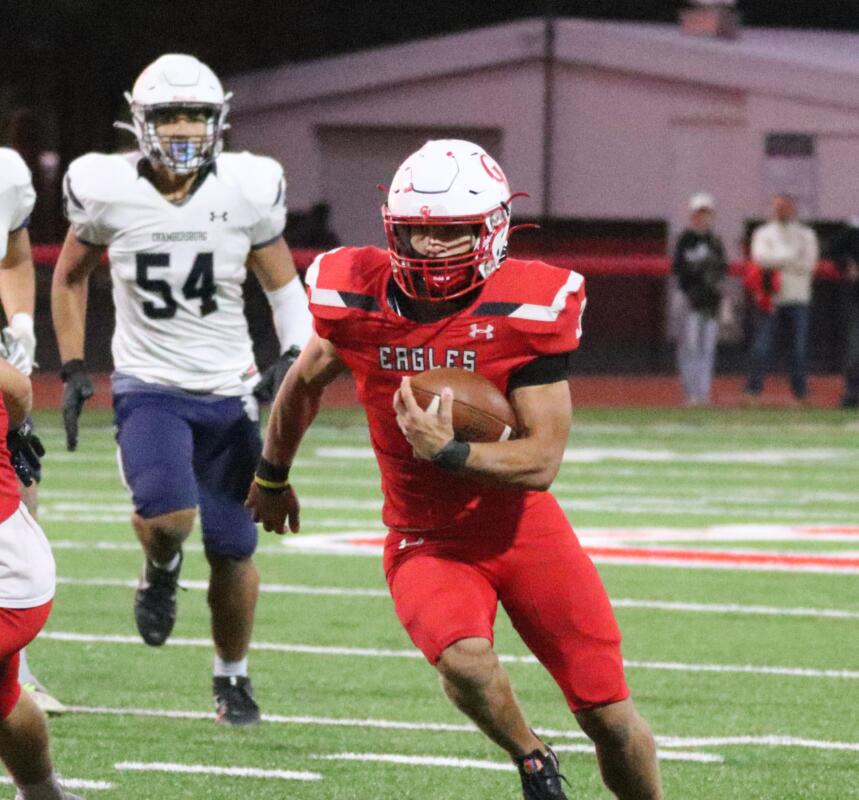 The event took place at Chapman Field at Cumberland Valley’s new high school football stadium. Home of the PIAA State football Championships. The new stadium is something to behold with its new jumbotron/scoreboard. Lighting has been upgraded to LED lights, also, they have lighting that can change colors and move around, lights flashing as an indoor pro sports stadium.

The game really got interesting in the 4th quarter but by the time 0:00 on the game clock, Cumberland Valley 38 Chambersburg 14.

Coming of a disappointing loss to Harrisburg Cougars last week it was certain CV would have a good week of practice to get back on track to reach their final goal. Chambersburg had a good warm up and looked ready for the game. CV won the toss and elected to receive the opening kickoff, and returned to their own 40-yard line, however due to a quick offsides they gained five yards 45-yard line before a single snap. CV’s first play of the game was a monster run across mid-field to Chambersburg’s 36-yard line. The big red machine was only warming up as three plays later Isaac Sines tosses 28-yard TD pass to J. D. Hunter, CV 7 Chambersburg 0.

The second drive was pretty similar to the first. A Chambersburg penalty put the ball at Chambersburg’s own 31-yard line, 5 plays later Isaac Sines runs it in for a TD, 6:10 of the first quarter, CV 14 Chambersburg 0. Much better team than last week vs. Harrisburg they were composed, focused, and determined to play ahead of the sticks on short yardage for 2nd and 3rd downs.CV went four for four on their scoring drives.  Third dive was quick 3 pass, 2 run drive that stalled at Chambersburg’s 16-yard line where Isaac Sines field goal made the score CV 17 Chambersburg 0, That as the 3rd time having a score through three drives.

Starting at their 37-yard line Isaac Sines pass went for 20-yards to Paddy Hernjak, they then rushed the ball five times from the 43-yard line for a TD, at 5:19 2nd quarter, CV 24 Chambersburg 0

Second half CV came out pumped up and feeling good where they stood by blanking out Chambersburg, however, as fate would have it that would fleet away in the 4th quarter. Still in the 3rd quarter CV first drive ended the consecutive scoring, 8 plays later turning the pall over on downs. After a Chambersburg touchdown, good teams always find a way to win, on the ensuing kickoff Paddy Hernjak received the ball at the 10 started up the middle but found himself going to the inner boundary and a foot race from there to the endzone, at 8:44 of the 4th quarter, CV 31 Chambersburg 7. CV’s final score took place at 6:37 of the 4th quarter, on a 2-play rushing touchdown by Joshua Wagenheim.

Chambersburg struggled against CV’s size and the quickness throughout the game, but don’t let that fool you as Chambersburg twice rallied the wagons. Starting at their own 22-yard line Harrison’s first rush went 27-yards, second attempt went 33-yards, and ended after a few more plays, two-yard rushing TD at 3:40 of the 3rd quarter, Chambersburg 7 CV 24. Chambersburg showed heart and determination by driving the ball downfield on two passing plays of 41-yards and 14-yard TD at 9:00 of the 4th quarter. Chambersburg 14 CV 38