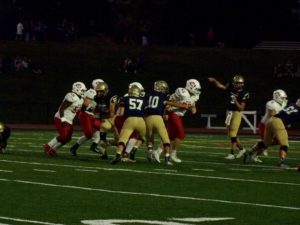 The Penn Manor Comets faced the Wilson Bulldogs at Penn Manor High School. The first quarter kicked off with Wilson getting a field goal with 7:51 left in the quarter. The Bulldogs had intended for a touchdown but it was blocked by senior Josh Gibson. Penn Manor gained some initiative with a tackle on the Wilson quarterback by senior Jared Musser. Wilson followed with a flag soon after this play. With 4:17 left in the quarter, Wilson received a second flag due to a personal foul.

An impressive play followed when Penn Manor’s junior Isaiah Stoltzfus ran to first and goal with 3:11 left in the quarter. Stoltzfus caught the ball in the end zone and scored the first touchdown of the game. The Comets followed this with a successful two point conversion by senior Aaron Gale. 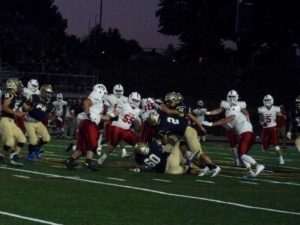 Wilson stepped it up with offense and is soon first and goal with 2:52 left in the quarter. Wilson successfully scores the touchdown and gets the extra point. The quarter ends with a Wilson lead of 10-8.

A few minutes into the second quarter, Wilson scores a touchdown with 9:38 left in the quarter. The extra point is scored and the score moves to 17-8. The next time Wilson receives the ball, they immediately score another touchdown. With the extra point scored, Wilson jumps ahead with the score of 24-8. With 5:21 left in the game, Wilson receives their third penalty of the game due to pass interference. 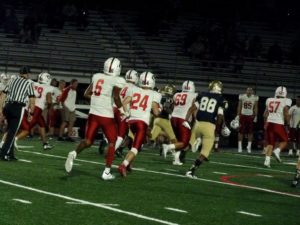 With Stoltzfus on the carry, Penn Manor gets a third down near the end zone. The initiative is lost when Penn Manor receives a flag for holding and PM quarterback junior Luke Braas is tackled with a loss of yards. The quarter concludes with another touchdown by Wilson with 0:24 left in the game. The scored extra point makes the score as 31-8 as the first half of the game ends.

The third quarter kicks off quickly when Wilson gets a touchdown in the first minute of the half. The next time Wilson received the ball, they immediately scored yet another touchdown making the score 45-8. The rest of the quarter goes by mostly uneventful until Penn Manor’s defensive line steps up with a sack. Junior Colt Barley sacked Wilson’s quarterback with 2:57 left in the game. Penn Manor ends the third quarter with three consecutive incomplete passes and a score of 45-8. 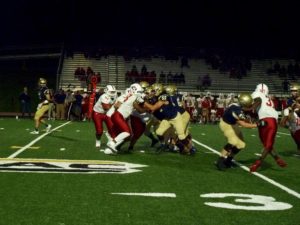 The fourth quarter begins with Stoltzfus on the carry with 30 yards to the goal. The Comets soon get a touchdown pass caught by junior Kyle Murr with 10:05 left in the game. Penn Manor executes their second successful two point conversion of the night made by Stoltzfus. Even though PM senior Ethan Adelman performs an impressive tackle on Wilson, they score a touchdown with 7:22 left in the game. The extra point is missed by Wilson which leaves the score 51-16.

After carries by both Gibson and Stoltzfus, the Comets are first and goal with 3:35 left in the game. Penn Manor receives another touchdown scored by Murr’s catch. Stoltzfus has another effective two point converstion following the touchdown. The game ends with the win by Wilson and the impressive score of 51-24.

The previous year, Penn Manor lost to Wilson 44-0. Even though Penn Manor took another loss, they were able to put up a better fight than they did in previous years. Penn Manor’s next game will be held Friday, September 27th at 7:00 at Penn Manor High School.