Thoughts, Observations, and Quotes from An Incredible Game @PRRamsFootball @GMSDAthletics 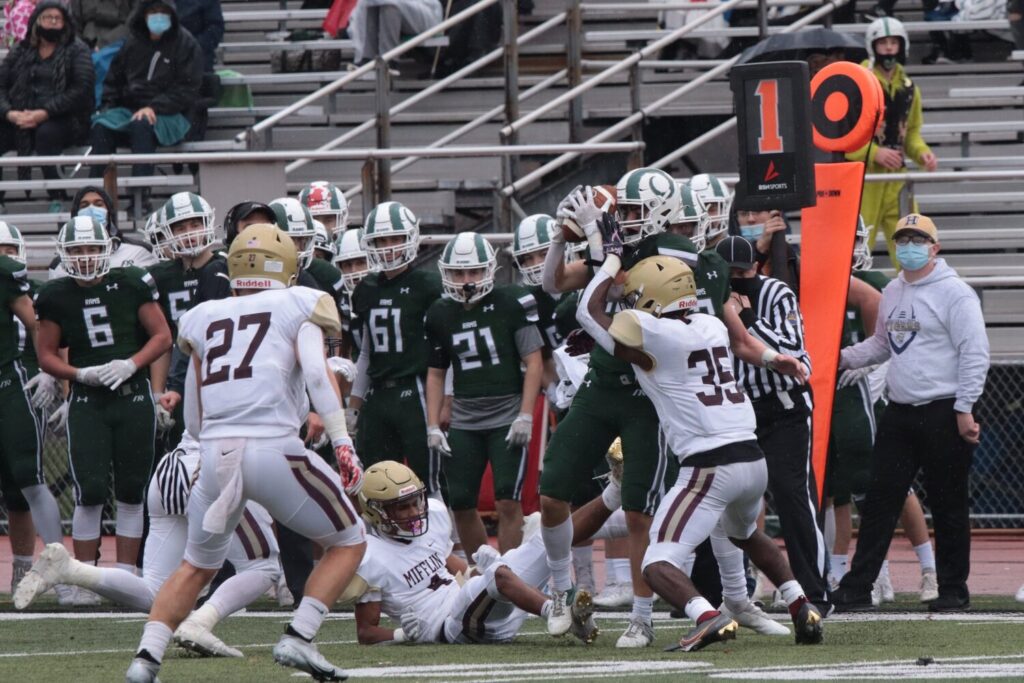 The game between Governor Mifflin and Pine-Richland Saturday afternoon in Hollidaysburg was a classic.  No, it didn’t quite go down to the last play, but it did go down to the last minute and a half before the Rams stuffed a Mustang running back on 4th and three at the GM 37.  From there the team from Gibsonia was able to run out the clock to claim a hard-earned 48-44 victory.

Down 21-0 early in the second quarter and 41-19 midway through the third, Pine-Richland roared back both times, but never took the lead until Cole Spencer’s 54-yard run with a little over two 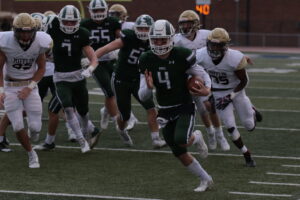 minutes to go in the game.   My experience in covering hundreds of high school football games and seeing hundreds before becoming part of the media is that rarely will a high school team come back from a three-score deficit, let alone 22 points with 18 minutes (a quarter and a half) remaining.  Yet that is what the Rams accomplished through determination and desire and execution.

Speaking of Cole Spencer, he told me after the game that the play he scored on is called a Q Seal and that he never ran that play before.  In fact, in Mike White’s interview for the Post-Gazette Spencer said, “The running backs usually run it.  It’s a hard play, it’s like you read the outside of the tackle and you either go outside or inside and I just stayed behind John Swisher our left tackle and took it outside and went all the way.”  Watching the play again you can see Luke Miller make a beautiful block on the GM defensive end that actually gave Spencer the room he needed to go outside and down the sideline untouched.

My heart goes out to the Governor Mifflin Mustangs who gave it their all and who came into the game as underdogs even though they were averaging 56 points a game.  Per Mike Drago’s article for the Reading Eagle, Coach Lang stated that Pine-Richland had one of the best defenses his team ever faced.  When it was pointed out that his Mustangs scored 44 points on them, Lang just said, “it wasn’t enough.”  The Mustang defense were hitters and the first team defense had not yielded many points all year.  Mifflin was without their starting corner due to ineligibility, then his backup went down during the game.  That injury was followed by one of their top tacklers, LB Zack Parsons, being taken off the field by stretcher and taken by ambulance to the local hospital as a precaution for a possible concussion.  “We just got worn down at the end.  When you’ve got athletes like Pine-Richland has all over the field, chasing them around takes a toll on you,” said Coach Lang in the Reading Eagle.

The game was not clean as far as turnovers go.  Pine-Richland uncharacteristically turned the ball over 5 times including 3 interceptions.  (They only had thrown 4 picks all year).  But much of that is a tribute to the Mustang defense which was probably the best the Rams saw in 2020.  Governor Mifflin’s offense was very opportunistic and cashed in on 4 of those turnovers.  GM’s offense did a little better holding onto the ball, turning it over only 3 times.  Pine-Richland’s offense took advantage on 2 occasions by turning those defensive takeaways into points.

I imagine Coach Lang and his staff emphasized all week about the offense controlling the clock with sustained drives.  By doing that, they would keep the Rams’ high-octane offense off the field.  Game plan accomplished.  They held a humongous time of possession margin for the game.  They had the ball for an amazing 34 minutes and 42 seconds compared to Pine-Richland’s meager 13 minutes and 18 seconds.  In fact, on the drive that led to a field goal putting them on top 44-41 with 3:06 left in the game, they held the ball for 8 minutes and 34 seconds!

So how did Pine-Richland win the game with such a distinct disadvantage in time of possession?  Short fields.  Five of the Rams’ seven scoring drives began in Mustang territory.  The average start on those five drives was the Mifflin 33 and each time it took an average of 4.5 plays to score.  The other two scoring drives both began at the Ram 38 which is not bad field position either.

Governor Mifflin had two 100-yard rushers in Brandon Strausser and Nicholas Singleton.  Not many teams are blessed with two stupendous running backs like the Mustangs have.  Singleton, a junior, has many offers from D-1 schools.  Strausser, a senior, actually may end up playing linebacker at the next level.  There are other Mustangs who are college prospects which includes Camron Stewart the 6’5” 240-pound TE/DE.

QB Cole Spencer is setting records at a school that produced Ben DiNucci and Phil Jurkovec. He is now the all time winningest quarterback at Pine-Richland.  However, the difference is Spencer is also an elite wrestler and will use his wares as a grappler at the collegiate level, giving a verbal commitment to the University of Pennsylvania.  But, Pine-Richland has others heading to the next level to play football including Luke Miller (Kent State), Miguel Jackson (was Liberty but now open), and Eli Jochem (undecided) the career receptions leader for PR.

I’d give the player of the game for the Rams to the team.  The offense had lapses, the defense had lapses, and individual players had lapses, some pretty huge.  But, as Coach Kasperowicz put it after the game, “You play for each other. You love each other.  It’s not about any one person.  That’s what a team is about.  The lessons you learned in this game will be with you the rest of your lives.”

Miguel Jackson told me that he’d never been involved in a comeback like that as far as he can remember.  He also said that the maroon and gold were by far the best team the Rams had played this year and that they hit hard.  “What a game,” he declared with a big smile.

Coach K said to his team after the contest, “that’s probably one of the most incredible games I’ve ever been a part of.”  That’s saying a lot as he was quarterback for North Hills when they beat Central Bucks West in the 1993 4A state championship game by throwing a TD pass on 4th and goal from the 28-yard with 25 seconds left to pull his team within one.  Then he ran in the 2-point conversion for the win.  He also stated that Governor Mifflin was “a heck of a football team.”

Coach Lang echoed those words by saying, “that’s a really good football team over there.  Hats off to them.  Hopefully, they win it (state championship against Erie Cathedral Prep) next week.”

The thought crossed my mind as the warriors walked off the field of play and I saw half were elated and half were dejected, that the game of football can only have one winner and therefore someone must lose.  But, the game of life can be won by everybody if we just look in the right place.  Sometimes more character can be built through losing than by winning and kids are resilient, life goes on.  But, win or lose, games like the one between Governor Mifflin and Pine-Richland are memories for sure.