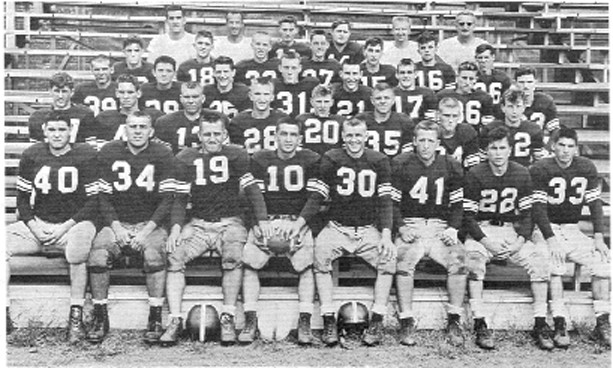 In one of the most decisive championship game victories in Pennsylvania history, the mighty Coal Township Purple Demons won the 1955 Eastern Conference title with a resounding 63-6 hammering of a good West Scranton squad. Playing on its home field in the alternating north-south format, Coal scored the first time it touched the ball when quarterback Lamar Switzer ran a punt back 75 yards to score, aided by superb blocking. The Purple Demons never looked back, leading 28-0 at the half and 40-0 after three periods. Coach Walter Marshall substituted freely but the avalanche never slowed. Veteran observers at this game termed Coal’s triumph the finest scholastic football performance they had ever witnessed. The Associated Press declared that Coal Township was the state’s finest team. The Purple Demons were obviously very explosive and could score at almost any time.

In the 1955 opener, Coal faced the Williamsport Millionaires, then in the midst of a golden age under Tom Vargo. Visiting Coal matched Williamsport touchdown for touchdown, but finally went down 28-25. Ahead 25-21 late in the game, Coal was marching for the clinching score when a screen pass was intercepted and returned for a TD.
The Purple Demons then rolled through the rest of their schedule, edging bitter rival Shamokin and its star Don Carsto, 14-12, along the way. Mt. Carmel, the defending Eastern Conference champion, with future Southern Cal All-American Dan Ficca, was destroyed 40-6 – the Tornadoes’ only loss. The Purple Demons executed their game plan perfectly and Mt. Carmel never had a chance. Swoyersville, the 1956 conference champion, was buried 33-7. The Sailors’ only other loss was to West Scranton, 7-6.
Against the aptly named West Scranton Invaders, after Switzer’s lightning strike, big 205 pound junior fullback Vince Paczkoski scored four times on runs of 15, 10, 19 and 24 yards. Switzer scored again, this time from the one. Jim Rubendall and Robert Martin also tallied from in close. Bob Thomas completed the rout with a 70 yard kickoff return after the Invaders had finally scored on a 40 yard pass play.

Another junior, a fireplug short yardage demon, halfback Bernie Rumberger, was named to the 1955 All-State first team. He and Paczkoski led another fine Coal team in 1956, with Paczkoski winning every honor in sight including first team All-State, Big 33, and All-American. Tackle Sid Rozinski made the third unit selection.
Lamar Switzer ran an outstanding game as quarterback for the 1955 machine, while up front, a devastating line, paced by center Ben Blascovich and guard Pat Forbes, cleared the way.
In 1950, another great Coal team marched to the Eastern Conference title. This team administered the only defeats to the vaunted Swoyersville Sailors in a three season period, winning 7-0 at Coal and rallying to win 26-13 in the mud in the Eastern Conference title game at Kingston. The Sailors had perfect records in 1949 and 1951. Fullback Johnny Zupicick rushed for three touchdowns as a punishing Purple Demon defense forced six second half Sailor fumbles. Zupicick was honored on the All-State second team.
Coal was undefeated in a string of 24 games, from mid-1949 to mid-1951. Again, from mid-1953 to mid-1957, the Purple Demons did not lose a conference game.
The series between Coal and Swoyersville, beginning in 1950, was one of the fiercest in anthracite region history. Two class programs went head-to-head through most of the decade.
Tackle John Gurski of the 1950 squad went on to star at Penn and become a highly respected scholastic coach. Zupicick was a star running back at Richmond.
Paczkoski’s father, also Vince, a standout at Coal in 1925 and 1926, went on to play at Villanova and later became Coal’s principal. Son Vince, the 1957 class valedictorian, followed in his father footsteps and played at Villanova. He became a prominent dentist in the Coal-Shamokin community.

1955’s Blascovich became an excellent center at Cincinnati and later an assistant at Coal. Halfback Robert Narke played at Dayton.

Coach Walter Marshall had extraordinary coaching credentials. He was an All-Philadelphia guard at Simon Gratz High in 1933 and 1934. He was a letterman guard at Notre Dame and served as freshman coach for the Irish after graduation. After another year as head man at Northeast Catholic in Philadelphia, he came to Coal Township as head coach in 1940 and 1941. Marshall then returned to Northeast Catholic, and went on to Dartmouth as line coach and Lafayette as the head coach. From Easton he went to Buffalo to mentor Canisius, and then to Auburn as an assistant.
In 1949, Marshall was persuaded to come back to Coal Township and the Purple Demons entered their greatest era. His stunning seven-year record was 59 wins, only 14 losses and a solitary tie. After the 1955 season, Marshall left the coal regions for a head coaching job in New Jersey. Five years later, he left the coaching profession and moved to Florida.
Walter Marshall was a strong disciplinarian who stressed fundamentals and attention to details. One of his Coal assistants, Bernie Romanoski commented recently that ” Walter Marshall was ‘ahead of his time’ in his approach to the game”. Regarding preparation, Romanoski said “we would spend 15-20 minutes running a single play until we got it right. ”
The powerful 1955 Coal starting lineup:

At halfback, 20 Jim RUBENDALL saw a lot of action. Big 41 Jim BRIGHTBILL relieved at tackle and handled all the kicking.

Coal Township surrounds Shamokin at the western end of the Southern Anthracite field. In 1917, the two municipalities had a combined population of 45,000. Ten anthracite collieries and a huge silk mill brought prosperity. Today, the total community is much smaller and the economy diversified. In 1964, the Coal Township and Shamokin school districts merged to become Shamokin Area. The color Purple survives.