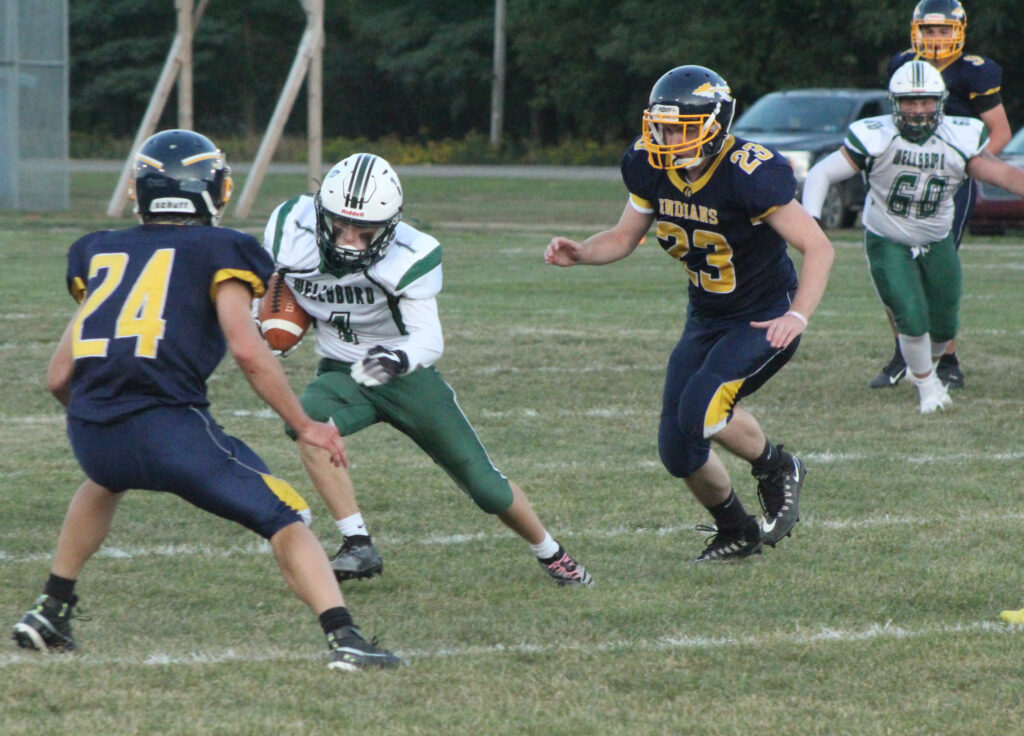 As his eighth season at the helm of the Wellsboro Football program started, Matt Hildebrand became the program’s all-time wins leader after a 48-6 win on the road at Cowanesque Valley on Friday, September 11.

Hildebrand surpassed former head coach Russ Manney after tying him at the end of the 2019 season. Through his first 81 games Hildebrand has accumulated 67 wins, with only 14 losses, has won 82.7% of his games, and has never lost more than three games in a season.

“I’ve had some very talented athletes that have come through here, it doesn’t happen if you don’t have them,” Hildebrand said. “The other part of it is the kids have to buy into it as well. You can have the most talented kids but if they don’t buy into your scheme or what you’re saying it doesn’t happen. We’ve been very fortunate to have very quality kids as well. The families we’ve had come through here have been very supportive and the coaching staff’s I’ve had, a lot of the guys that we started with are with me in some capacity and the consistency and the work behind the scenes, they don’t get the credit, but none of this happens without them.”

Wellsboro got off to a slow start as they turned the ball over on back-to-back drives. On their third drive of the game, however, the Hornets mounted a drive from their own 36-yard line that ended on a 6-yard scoring strike from junior Isaac Keane to senior Zach Singer to give the Hornets an early lead. From that point on the flood gates opened and lead to 35 unanswered points. After stopping the Indians on their ensuing drive Wellsboro only needed three plays to reach paydirt for the second time, this time a 7-yard run by senior Nick Smith. Sophomore Jack Poirier’s extra point split the uprights and Wellsboro led 14-0 with 9:48 left before halftime.

Wellsboro’s defense forced back-to-backs sacks on Tucker St. Peter on the Indians’ next drive to get the ball back on their 22. This time the Hornets only needed a single play as junior Darryn Callahan hit a seam and scampered 22-yards to make it a 21-0 lead. Callahan picked up in the third quarter the same way he ended the second, with a touchdown run. His second score of the evening came on Wellsboro’s opening play of the quarter from 56 yards out to push the lead to 28-0. The Hornets then made it 35-0 two minutes later following a turnover as Keane threw his second touchdown pass of the night, this one to sophomore Will Kibler, from 9 yards away.

Cowanesque Valley found the scoreboard with 4:44 left in the third as St. Peter floated a pass deep down field to Tanyan Brown for a 43 yard scoring strike.

With six seconds left in the third the Hornets found the end zone again. After a 39-yard run by sophomore Conner Adams down to the 5, junior Kanan Keck fought his way for a yard to increase the lead to 42-6. Keck later added the game’s final score midway through the fourth on a 2-yard run.

Keane finished the night 9-for-14 for 89 yards and 2 touchdowns through the air while adding 47 yards on 4 carries. Adams carried the ball 5 times for 55 yards, while Callahan led all rushers with 121 yards and 2 scores on just 7 carries. Singer lead the receiving corps with 3 catches for 35 yards.

St. Peter finished 3-for-14 passing for 73 yards with Brown catching every ball. Elliott Good led the ground attack with 21 yards on 15 carries.

Next up for the Hornets is a rivalry game with North Penn-Mansfield for the Morton F. Jones Memorial Trophy. Wellsboro defeated North Penn-Mansfield 21-7 to regain the trophy in 2019, but the Panthers had the last laugh as they knocked Wellsboro out of the District IV Class AA playoffs in the first round a week later.

Kickoff is scheduled for 7:00 p.m. at the Wellsboro Community Athletic Complex next Friday, September 18.