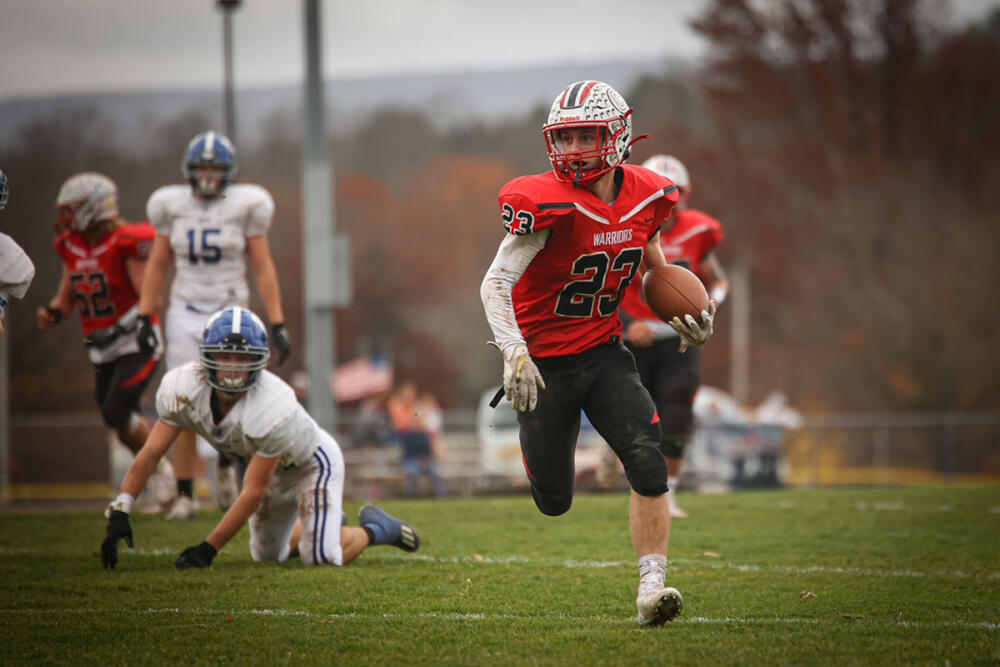 The Canton Warriors defeated South Williamsport for the second time on their home field of the season, this time it was a 42-13 victory in the District IV Class A semi-finals on Saturday, November 5.

The Warriors took the game’s first lead of the afternoon with 1:41 remaining in the opening quarter on a Hayden Ward score to make it 7-0. Canton extended their lead to 14-0 with 8:53 left before halftime on a short run by Bailey Ferguson, then Riley Parker broke free with 4:04 left, pushing the lead to 21-0. Canton later tacked on another score before the half expired, on another Parker run, making it 28-0.

The Warriors two more scores in the second half to take a 42-0 lead over the Mounties and enacting the mercy rule. Parker scored his third touchdown of the game on a 45 yard run along the South Williamsport sideline to give Canton a 35-0 lead then Ben Fitch scored putting the Warriors up 42-0.

South Williamsport’s Ryan Casella broke the shutout with 9:50 remaining in the game cutting the lead to 42-6. Later, Radley Knapp run a QB sneak to cut it to 42-13.

“We’re really happy with the win this afternoon,” Canton head coach Tyler Sechrist said. “We talked all week about going 1-0 each week and now we can move on and look at the district championship and going 1-0 there.”

Canton (10-1) will travel to Muncy (10-0), 54-6 winners over Northwest Area, next Friday, November 11 for a rematch of last year’s District IV Class A championship.