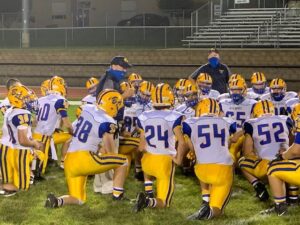 By Ryan Spring
LOYSBURG – Nick Lovrich described the second half of Friday night’s game as some “Old School Bellwood football.”
And the results were as per the usual for the Blue Devils, no matter which date in history. The visitors scored 23 unanswered points to pull away from Northern Bedford in a 36-14 victory to open the 2020 season.
In a game between perhaps the top two teams in the Inter-County Conference, it was perennial front-runner Bellwood using a dominant power attack to overrun the Black Panthers after trailing by a point late in the first half.
Down 14-13, Bellwood used up much of the last six minutes in the second quarter to take the lead for good on a 10-play drive that finished with Zach Mallon’s 12-yard run to the end zone. The Blue Devils converted a short fourth down attempt midway through it and Mallon had a 21-yard scamper that helped set up his touchdown.
Bellwood failed on a two-point attempt, but took the second half kickoff and marched 77 yards to the house for a double-digit advantage. This drive was also 10 plays long and chewed up nearly six minutes. And again, it was Mallon hitting paydirt, from nine yards out. Preston Wilson’s extra point gave his side a 27-14 lead at the 6:05 mark of the third quarter.
“We knew Northern Bedford was going to be tough,” said Lovrich, in his third year as Bellwood-Antis’ head coach. “Traditionally, their defense has always been tough and they’ve given us trouble. We kind of thought we had a strength with our (offensive) line. It was the old three yards and a cloud of dust, and we were happy with that.”
Mallon, coming off an 1,100-yard season as a junior, picked up where he left things in 2019 by torching the Panther defense for 147 yards on 19 carries and three touchdowns.
“We were blocking really well, and I was able to see where the cuts were,” said Mallon. “I feel like we’re really well-conditioned, and that helps us in the games. Our practices transfer over.”
“Zach has worked really hard,” added Lovrich. “He always credits his line, he’s a team-first player.”
Northern Bedford punted to begin the game but forced a fumble to get the ball back near midfield. The Panthers then put together three of their biggest plays of the night on consecutive snaps, a 14-yard scramble and pass from Thad Leidy to Evan Clouse followed by Leidy’s short toss to Dalton Smith which gained 15 more. After that, Smith busted through for 25 yards to get to the doorstep of the goal line.
Smith punched the ball across on the next play and Collin Yeatts added the extra point to make it 7-0 with 6:31 remaining in the first quarter.
Bellwood’s first long drive of the night resulted in Mallon’s 15-yard scoring run during the quarter’s final minute, and Joe Dorminy had a short touchdown run at the 9:28 mark of the second that gave the Blue Devils a 13-7 advantage.
However, the Black Panthers answered in six plays and 57 yards. Included in the possession were back-to-back first-down runs by Cadin Ebersole and Leidy. Bellwood jumped offsides to put the ball inside its 10-yard line, and Smith completed the drive on an eight-yard touchdown run, with Yeatts adding the point-after for a 14-13 edge.
“I think we’re pretty good,” said Northern Bedford head coach Garry Black. “Bellwood’s the cream of the crop in the ICC year after year. We were there late in the second quarter. Our skill kids did some good things, and we had some junior offensive linemen that stepped up in the first half. In the end, Bellwood’s a top-10 team in the state that just got it on us.
“Their strength showed. They’re strong up front with some veteran kids. They have a good run game and ran the ball right at us. We couldn’t match up and stop it, and couldn’t compete with them physically in the second half. Not being able to get off the field on third and fourth downs (defensively) was a real back-breaker.”
Leidy led the statistics for the Black Panthers in completing eight passes for 91 yards.
Bellwood-Antis will host Everett next week, while Northern Bedford travels to Glendale.