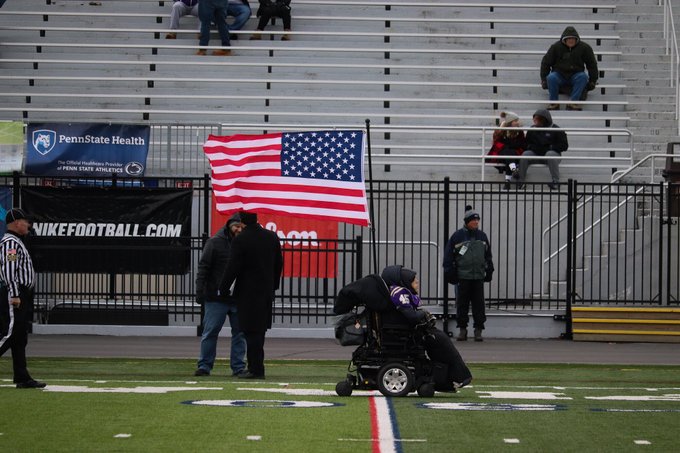 If you’ve ever been to a Bishop Guilfoyle football game, there’s no doubt you’ve seen their team captain, Jorden McClure, who for the last 10 years or so, led the Marauders out onto the field, flag attached to his chair, smile from ear to ear. Jorden McClure has a condition called Larsen syndrome,  a condition that affects the development of bone joints. But that doesn’t stop him from doing amazing things. He’s been leading his team onto the field for many years and rarely missed a game. And on Friday, he received an honor that just might have topped all the state title appearances he led his team onto the field for. Jorden was invited to the White House for a special graduation ceremony held by President Trump. Pictured below is Jorden, President Trump, Melania Trump and Secretary of Education Betsy Devos. 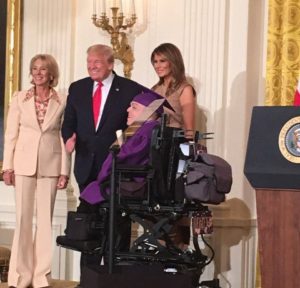 The event was all a big surprise to the McClure family. Jorden’s mom, Robin, said “When the White House reached out to the Archdiocese to refer a person to attend the graduation ceremony, that person reached out to Bishop Guilfoyle who in turn chose Jorden.” There were 17 graduates there, including a kindergarten graduate, several high school and several college graduates. “They want to honor graduates of the class of 2020″ said Robin. When they heard Jorden’s story they were very interested.”

When his mom told him the news, Jorden thought it was a joke. “I was just in pinch me mode” said Jorden. “At first I thought it was a joke but then she said ”no I’m serious, you’re going to graduate in front of the President. And then about an hour later after she told me to hit me and I was like “oh my gosh I’m going to the White House and I’m going to meet the president!” Jordan, it should be known, is a supporter of Donald Trump which made it all that much more special. 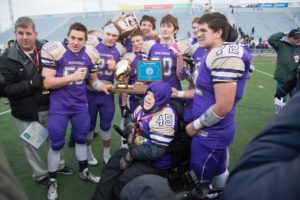 “He’s just a really amazing kid and it’s a very special moment for a program” said head coach Justin Wheeler. “I mean the kid has been a fighter all his life and he obviously can’t do some of the things that other kids can do but now he just “one upped” their state championships by going down and meeting the President of the United States, so he got to do something they didn’t get to do.”

The family didn’t know this was going to happen until on Friday, May 15 and the ceremony was on Friday, May 22. The event was held in in the East wing of the White House. It was a traditional graduation with processional. The president and Melania both spoke and then they received a graduation certificate from the president. 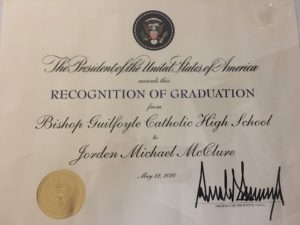 “Yeah, I got to go on stage and get a certificate from them, it was really pretty awesome” said Jorden.

Thank you to @realDonaldTrump for giving our Team Captain @JordenMcClure an amazing experience. Jorden is the Heart & Soul of the team. It was an honor to hear you & Jorden talk about our football team & our 3 State Championships. #Believe #TrumpLovesWinners #ThankYouMrPresident pic.twitter.com/ipccpYWtDf

Jorden said the ceremony that it did not feel the same as it would have had he gotten to graduate with his peers,  which obviously can’t happen due to COVID-19, but he said he did pick up some of the slack and made for a special graduation moment. “I mean you’re sitting there in front of the President of the United States and he is the guy who is leading the ceremony and that’s just pretty cool, it was just an awesome experience. If I could have taken the whole Bishop Guilfoyle class with me I would have but of course that was impossible.

Jorden also gave the President his own piece of history. “I gave him one of my previous jerseys which was pretty cool because my number is 45 and he’s the 45th President of the United States so that was pretty cool for me”. They also had a shirt made for President Trump.

Jorden didn’t get to physically give him the shirt but the  staff gave it to them because it needed to go through screening and there also wasn’t much time for him to do that. They are hoping eventually to get a picture back from President Trump with him holding the jersey. 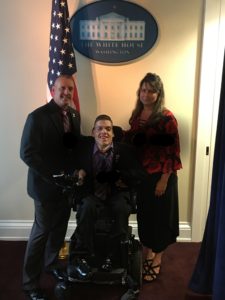 Jorden, father Sam and Mother Robin at the White House

“I’d like like to thank the people at Bishop Guilfoyle.  Jorden was able to graduate on time thanks to the efforts of the entire staff there” said Robin. “When the schools shut down BG hit the ground running and never missed a beat with their lessons. They were very well prepared”.

Jorden’s going to take a year off of school and figure out what he wants to do which, unbelievably, includes a way for him to earn his pilots license. He said “yes so the technology use for people in wheelchairs to be able to drive his first tested by pilots so I figure you know why can’t we use the technology to allow me to fly.”  He’d also like everyone to know that he’ll still be following and rooting for the Mauraders.  FLY HIGH JORDEN!!