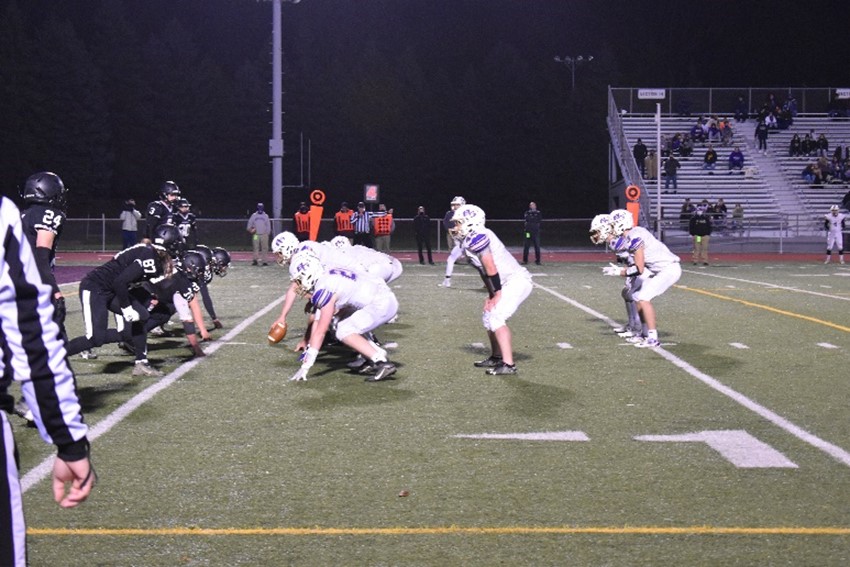 It’s always a despondent moment when you see the timer on the scoreboard flatline and the final whistle is called. The sadness attacks your body, with your stomach sinking into the ground as you fight hard to repress the stinging of warm tears. For the seniors on the losing team, walking off that field as the lights turn off behind you is one of the most devastating feelings to experience at that age. Football players pour their blood, sweat, and tears in every practice and game—but unfortunately for the Homer-Center Wildcats, their valiant attempt during the PIAA D6 Championship just wasn’t enough to overpower their dominant adversary.

Friday night’s clash between the Bishop Guilfoyle Marauders and the Homer-Center Wildcats was a rough night for many players, one that will remain in the heart of these seniors for a while. This also marked the fifth time in a short span of years that the Marauders and the Wildcats fought against one another, in particular the District 6 title game.

The first quarter was the beginning of the Marauder’s suffocating, never-ending momentum. The four-headed beast of Konner Keisewetter, Haiden Garner, Keegan Myrick, and Zach McCloskey dominated the offensive scheme for the Marauders, each posting up high stats in their dynamic scoring attack. Keisewetter, the main passer in the dynamic trio of quarterbacks, threw one touchdown to Garner and rushed in for two more. Myrick also shared another pass to tight end Andrew Yanoshak, and rushed for two touchdowns. Garner, the main receiver in the offense, also ran one in for the final touchdown for BG.

As for the underdogs in the Wildcats—the night was less spectacular and more heartbreaking. Schmidt, the cornerstone in the Wildcat offense, ended the night with two passing touchdowns to main receiving star Drew Kochman, the reliable shifty receiver with great hands and greater footwork. Schmidt also threw one interception, which was bumbled by offense and defense before a BG lineman finally came down with the ball.

By halftime, with the score already at 28-7, the level of moral between the Wildcats was low, but the leaders were opportunistic.
“It’s hard to get here, and we came here confidently,” said Schmidt, “but by halftime, we didn’t want it that way; it was embarrassing. We came out in the second half and tried to push, but Bishop Guilfoyle is just a powerhouse.”

Despite their valiant attempt at a second-half push, their hard effort just wasn’t enough. The Marauder defense shut down their rush game while queuing the offense based off Schmidt, and while the Wildcats fought tooth and nail until the bitter end, it just wasn’t enough to stop their opponents.

“We got put behind the 8-ball,” said the teary-eyed head coach of the Wildcats Greg Page. “They’re a fine football team, and they were ready tonight. They pounced on us.”
Most of the heartache, however, wasn’t experienced until the final whistle and the white sea of helmets raised by the Marauders. Most of the seniors, the passionate players who experienced a state championship game and District 6 title against the Marauders in 2017, and another trip this year.

“We have a lot of seniors who will go on to live tremendous lives,” added Page, “and we have a lot of fighters. I’m extremely proud of these guys, and we were blessed to have made it this far.”
For the Wildcats, their triumphant season has finally come to an end. Besides tonight, they only lost one other game this entire season, with that loss coming to Penn’s Manor. With all the valor, honor, pride, and confidence coming from the dominant Wildcats, the seniors finally take off their helmets for the last time. For Benjamin Schmidt, the quarterback who has now become one of the most dominant players in Homer-Center history, it’s a bittersweet moment for him.

“I didn’t want our season to end like this,” said Schmidt while holding back tears. “We played our hearts out tonight. I’m proud of my records, but winning tonight would’ve been special.”
The history behind the Wildcats and the Marauders dates back to 2013, where the Wildcats clutched out the title game against Bishop Guilfoyle in a legendary battle in the snow. Since then, each team has won twice and lost twice against one another, but it now sits as the Marauders holding one win against the Wildcats.

As for the seniors who departed tonight, it marks the end of a legendary run for Homer-Center. Two D6 games, with one title, along with a runner-up in the state championship. They have been blessed with good health and immaculate sportsmanship, but all good things must come to an end. They played hard, but the Marauders played harder. Congratulations to the Marauders as they advance to the first round of the PIAA Single A State Playoffs.