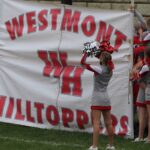 A lot has changed since last year. Westmont is one of my favorite places to watch a Saturday afternoon football game. The first thing missing was the pre game hand shake, where both entire teams go out to midfield to greet each other. There were no port-a-potties, no kids playing around the playground area, no concession stand and of course the lack of  fans. Here’s a prayer this will end soon.

The biggest change was the Westmont football team. The last few years when I have watched the Hilltoppers their offensive front has been able to impose its will on the opposition. They haven’t passed because they haven’t had too. They haven’t turned the ball over and have stayed out of third and long situations. This team will need to win differently.

Westmont received the kickoff and ran one play before turning it over to the Eagles on a fumble. Somerset drove 37 yards for the games first score, all on the ground except one short pass. Junior running back  Ethan Hemminger scored on a short run but the point after was blocked and Somerset led 6-0 at 7:37. Westmont then went on one of its patented drives using up over six minutes and changing field position. However they were unable to convert a 4th and 4 from inside the Eagles 20. The quarter ended with Somerset in the lead.

The Eagles offense now went on a long drive but a 4th down pass from inside the Westmont 30 was incomplete. The Hilltoppers started the next drive pounding the rock, but a surprise play action play found Hudson Holbay’s behind the Eagle defenders. Quarterback Alex Ray’s pass was perfect and the Hilltoppers were in business inside the Somerset 15. One play later and it was first and goal at the one.

Somerset now showed that they had come to play. They stopped the Hilltoppers on four straight runs from the one and took over on downs. Somerset had 2 minutes to use up and the ball on their own 1 yard line. On the second play from scrimmage sophomore quarterback Brad Bruner fumbled and Westmont recovered at the 1. The officials ruled Bruner down before fumbling (It was very close!). The Eagles were forced to punt as the Hilltoppers used their timeouts to preserve the clock. Westmont was able to get into position to try a 35 yard field goal on the last play of the half. Kicker David Assad just missed kicking into a strong wind.

The third quarter started with the Eagles getting the ball. The play of the game now took place. Somerset returned the kickoff 90 yards for a touchdown only to see it come back on a penalty for a block in the back. Somerset was penned up again near their own end zone and forced to punt. Westmont got great field position after the Eagles punt. The Hilltoppers drove inside the 20 and when fullback Madox Muto broke 4 or 5 tackles to score Westmont’s lone touchdown the game was tied. Assad added the extra point and the Hilltoppers led 7-6 at 5:57 of the third. The Eagles took 4 and a half minutes off the clock by driving to The Westmont 32 before losing a fumble. The quarter ended with Westmont leading and possessing the ball.

In years past Westmont would just pound the ball chew up the entire quarter and score. But the 4th quarter started with the Hilltoppers first punt of the game. After an exchange of punts Somerset was able to start their drive in Westmont territory. The Eagles then fumbled the ball back to Westmont with 5:30 to go in the game. The Hilltoppers drove inside the Eagles 40 before failing on 4th down with 2:24 left in the game. Somerset didn’t quit but drove to the Westmont 10 yard line. On 4th down with 9 seconds left they attempted a field goal to win the game. The kick was wide right and Westmont escaped with a 7-6 victory.

Spotlight Players-Somerset Sophmore QB Brad Bruner played very well for an underclassmen and looks to have a bright future for the Eagles.

Westmont Senior LB/RB Hudson Holbay’s seemed to have his name called by the announcer on every play, either making a tackle or rushing for yardage.