Tyrone Puts its Gripp on Bellefonte 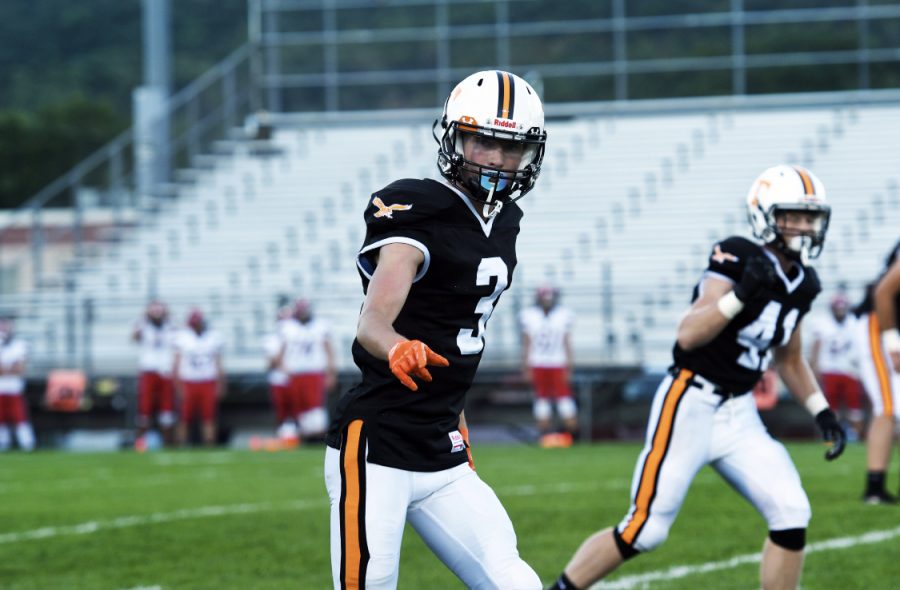 Going into the first game of the season, even some of the Golden Eagle faithful had their doubts about Friday’s match up with Bellefonte. The Red Raiders were ranked fifth in the state, first in the Mountain League, and had embarrassed the Golden Eagles 55-10 last season.

But thanks to a solid effort from Tyrone’s offensive and defensive lines as well as outstanding individual performances from cornerback/wideout Damon Gripp, quarterback Brandon Lucas and tailback Tommy Hicks the Golden Eagles pulled off an impressive 21-13 upset.

Gripp caught five passes for 146 yards and two touchdowns. He also intercepted two passes. Lucas was 9 for 18 for 186 in the air and 25 yards rushing.

“It felt great. We needed a play to get the momentum back on our side and the whole team knew it. The line gave me great protection and Damon made a great catch in the end zone,” said Lucas.

The first quarter started off rough for the Golden Eagles. A Tommy Hicks fumble on the first offensive play for the Eagles gave Bellefonte the ball in Golden Eagle territory. Bellefonte capitalized on the Eagle’s mistake and scored on their opening drive to put the Eagles behind by 0-7.

But early in the second quarter the Golden Eagles got a hold on the game. The Red Raiders were unable to lock down Damon Gripp who scored another touchdown for the Eagles. Another perfect kick by Markley put the Eagles in the lead 14-7.

A solid Golden Eagles defense would hold the Red Raiders at the one yard line on a fourth down to turnover the ball. The Eagles ended the second quarter leading 14-7.

The Raiders came out of halftime fired up, scoring on their opening drive of the third quarter, but a high snap on an extra point ruined Bellefonte’s chance of evening up the score.

The Eagles held a thin 14-13 lead throughout the third quarter.

In the fourth quarter, the Golden Eagle offense scored on a run to the outside by Thomas Hicks. This widened the gap between Bellefonte and the Golden Eagles. Markley made her third and final kick putting the Eagles at 21-13.

Markley kicked her way into Tyrone history by being the first female kicker on the Tyrone Football team. She finished the game successfully making all three kicks.

The Golden Eagles defense would hold the line and force Bellefonte to turnover the ball. The Eagles kneel the ball ending the game with a 21-13 win over Bellefonte.

“It felt really good beating a team that is ranked so superior to the other teams. It was a lot of fun walking off the field knowing we beat Bellefonte,” said Gripp.

The Eagles play again this Friday at Clearfield.