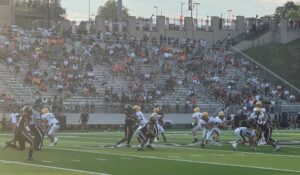 Coming into the 2021 season the Blackhawk Cougars football team under the direction of Head Coach Zach Hayward have been mentioned as on of the top teams not only in their conference but possibly a threat to be on of the final teams challenging for a WPIAL Championship come November.

In their Week 0 game against rival Beaver Falls they did not disappoint. Spotting the tigers a early 7-0 lead the Cougars came back striking quickly on a 73 yard TD pass from Carson Davidson to Carson Heckathorn to tie the game 7-7. From their the Cougars experience took over as Blackhawk roared to a 31-7 lead at the half.

In the second half Beaver Falls showed why this game is still considered one of the best rivalry games in the Beaver County area holding the Cougars scoreless in the second half and playing mistake free football to close the lead to 31-20 in the 4th quarter but couldn’t over come key turnovers that would prove to costly for the youthful Tigers team.

Heckathorn finished with three catches for 96 yards as well having a stellar performance defensively for the Cougars, as well as Davidson who passed for 198 yards on 10 completions. Not to be overlooked, Tyler Diettrich led Blackhawk in rushing finishing with 81 yards on the ground. Blackhawk will continue play next week as they host the Hopewell Vikings, while the Tigers play host to the Aliquippa Quips.