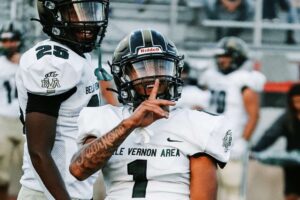 Week one of high school football opened up across the keystone state, including a rematch of last year’s WPIAL quarterfinals matchup between the Belle Vernon Leopards and the Chartiers Valley Colts.

Tonight, was not much different then last years matchup between both of these schools as Belle Vernon came at of the gates dominating through the run and it was all Devin Whitlock early as before people could find their seats Whitlock already had touchdown run of 32 and 48 yards to put the Leopards up 14-0 at the end of the first quarter.

@DevinWhitlock3 again! Another keeper for the QB puts Belle Vernon up 14-0 with 1:32 left in Quarter 1! @PaFootballNews pic.twitter.com/06lLWez7UU

Then when Whitlock needed to catch his breath coach Matt Humbert went to Belle Vernon’s sophomore phenom Quinton Martin. Martin would open up the scoring in the second quarter with a 46-yard touchdown run to make it a three-score game.

The Colts did respond with a big 70 yard touchdown run from quarterback Anthony Mackey to make it 21-7 and the Colts thought the momentum was starting to swing there way, but on the ensuing kickoff Quinton Martin runs 94 yards to the house to make it 28-7 late in the second quarter.

Whitlock would add two more touchdowns to his impressive night. Another on the ground and one through the air and Belle Vernon would go on to win 49-14 and put everyone in 4A on notice in doing so.

Belle Vernon will be back in action next for their home opener at “the beach” when they host 5A power Penn Trafford.