Gateway DB Shane Thrift took advantage of the new “virtual recruiting wave” with Delaware and they won him over, He committed today 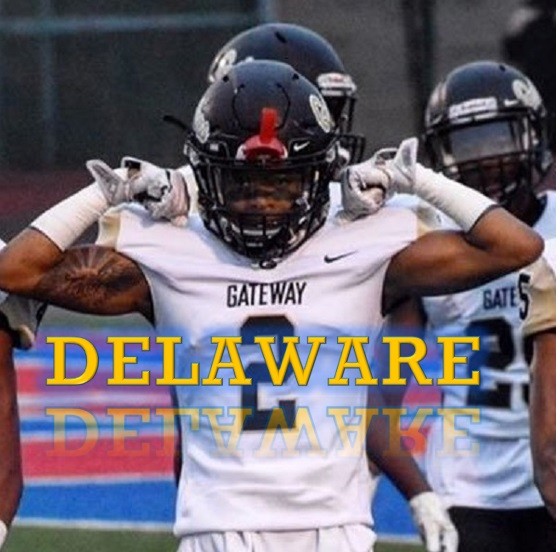 It’s a whole new world of recruiting out there. Even college coaches are checking in with their tech guys to keep abreast of the technologies available to them to help them recruit players in this world of no visitations. The staff at Delaware must be doing it right because that’s exactly how they landed a commitment from Gateway DB Shane Thrift. He announced that decision on twitter today:

Just Another Chapter In My Story #COMMITTED #BleedBlue302 pic.twitter.com/qTXcJoyxtP

Shane hasn’t stepped foot on the Delaware Campus, yet through the magic of the virtual tour and the comfort he received from the Blue Hen Staff, he felt “at home” enough to pledge his college career with them. “Yeah, through the virtual tour I got to see every thing. I saw the sport side and the school side of things.” Another aspect that interested Shane was the fact the Delaware has deep roots in the WPIAL. “One of the main things that I really was comfortable with was there’s a lot of WPIAL kids already at Delaware.” Ryan Coe and Noah Plack from South Fayette, Mateo Vandamia from West Allegheny, Isaiah Schoonmaker and Dan walker from Washington, Amonte Strothers from Steel Valley, Fintan Brose, all represent the WPIAL for the Blue Hens. “They all talk to me and they’re saying “hey it’s just like four hours away so let’s do this. The other thing is coach Manny Rojas was a 412 guy so they take care of us out here.” Rojas helped lead West Allegheny to a state title and played for the PA Big 33 Squad.

Thrift says he was born to play football and get that college education. He first strapped on a helmet when he was four years old, then he got to follow his brother Brenan’s (West Virginia) recruiting journey as he grew up. Shane says because of that he was prepared, but he still sought out the advice of his parents and his Head Coach Don Holl, who’s daughter attends Delaware, and Coach Holl said “hey, they really like you and they’re talk to you a lot. He really helped me out. The coaches, they talked to me all the time, dang near every day and that was important to me. They showed me that they weren’t just talking like a lot of schools do.”

Shane’s parents play a very large role in his decision. “My mom and dad, they’re the one’s sending their kid off to college so what they say was important to me and at the same time I don’t want them to have to pay. They work hard. I asked them if they were ready and they said “yeah, let’s do this”.  My family, I mean like I said, I followed my brother since I was 11-12 years old. I went on recruiting trips with him and my parents, so yeah my whole family has influenced my football career. I doin this for them, I want to do this for them.”

He’s confident that more offers could come his was, but he’s already made up his mind.  “ I’ve talked to a lot of FBS, FCS schools but none of them pulled the trigger. I talked to like PSU, Toledo, EMU, Kent, Rutgers, but Delaware, they pulled that trigger and that meant a lot to me.  Covid 19 didn’t affect my decision. I already know where I want to go”.

He’s excited about the scheme they run at Delaware, and say’s it’ll fit his versatility. “They play 6 DBS, I’m going to play safety and some corner and said they’re going to try to get me playing time early so that’s got me excited to get there. For all ya’ll out there, just respect my decision. I’m doing this for all you and I’m going to represent you all”.