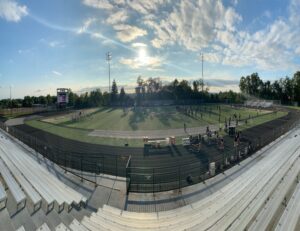 The Defending 5A WPIAL Champs got off to a hot start Friday Night. Gateway had 6 possessions in the first half and scored a touchdown on each of them in the 41-6 victory. “We’ve got a lot of really good skill players, and I thought the line did a really nice job, got our skill guys going a bit, they’re hard to catch in space” said Coach Holl.

Gateway got the ball to start the game. After a bad pitch on second down, Carsen Engleka found Chamor Price downfield for a 65 yard touchdown pass. That made it 7-0 Gateway with 10:10 in the first quarter.

On Franklin Regional’s first possession they went 3 and out. Gateway started their second possession very close to midfield. Later on in the drive Engleka connected with Price for a second time this one being 27 yards.

Franklin Regional desperately needed to get something going to stay in the game. They got out close to midfield but ultimately punted it away.

Gateway’s third possession started at their own 6. After a pass they were at the 25. 2 plays later the Gators struck again. This time Engleka connected with Patrick Body Jr. for a 69 yard touchdown.

After yet another 3 and out for Franklin Regional, Gateway got the ball back. This drive was different from the others, Gateway slowly marched down the field. The drive actually started in Franklin Regional territory, eventually Derrick Davis scored from 2 yards out. That made it 28-0 Gateway with 11:49 in the second quarter.

Franklin Regional finally got something going on their fifth drive. A pass to Brandon Zanotto got them into Gateway territory. Inside the 30, they went for it on fourth down a pass was completed but it was short of the chains.

Gateway started at their own 45 and it didn’t take them long to add on to their lead. Engleka connected with Price giving him the hat trick, this touchdown was 17 yards. Engleka had a big night passing. In the first half he was 8 of 12 for 293 yards and 5 touchdowns in the first half. “We had a pretty good feeling about him last year, broke his wrist in a mid season game and was challenging for the spot last year, he might’ve been our guy down the stretch, we had a lot of hope of what he could become, and he did a lot of good things tonight” said Coach Holl.

Before the half ended Gateway added one more touchdown for good measure. Chamor Price caught his fourth touchdown of the night this one being 72 yards. He also had a monster evening he had 200 yards on 5 catches 4 of those being touchdowns. “He might be the fastest guy on our team, maybe even in the league, he’s lights out, so it’s fun to watch him get going” said Coach Holl.

The entire second half was a running clock with the mercy rule in effect. Franklin Regional got on the board after a Gateway turnover when Trevor Brncic found Jeffrey Downs for a 4 yard touchdown. Next week Gateway hosts Bethel Park and Franklin Regional looks to get into the win column when they travel to Fox Chapel.