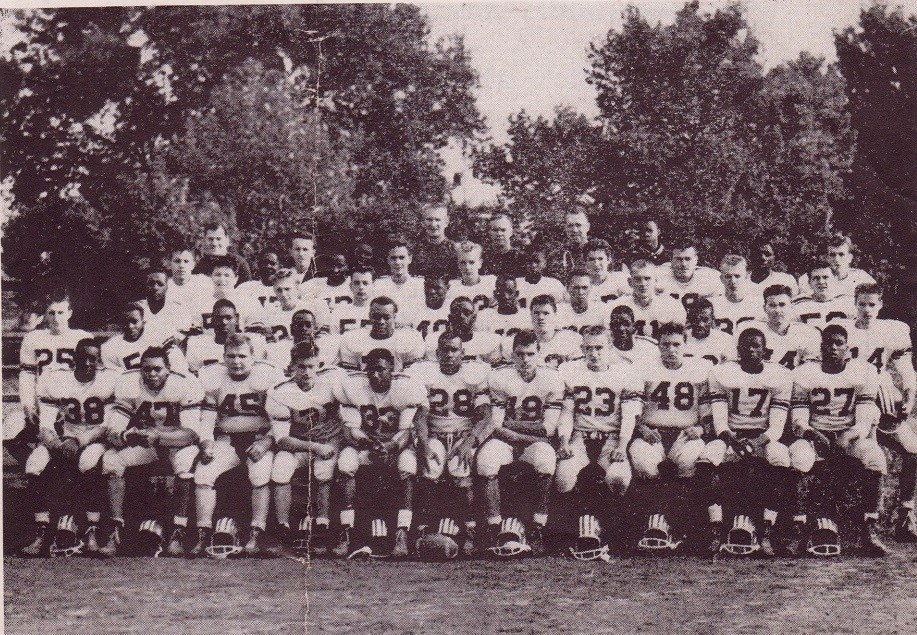 The legendary Chuck Klausing coached at Braddock High School for just six years, beginning with the 1954 season. In those six seasons, he won five WPIAL A titles outright and shared a sixth. His record at Braddock was an amazing 55-0-1; not a single loss. Chuck believes today that his final team, the 1959 squad, may have been the best – but he is reluctant to separate them from their five predecessors.

The old steel community just east of Pittsburgh on the Monongahela River is now just a shadow of its former might. The nearby Edgar Thompson Works of U. S. Steel still operates but most of the former residents and their children have moved out of the valley or away from Pittsburgh altogether. Braddock is now part of the huge Woodland Hills District.

Chuck Klausing was raised in Wilmerding, on the Pennsylvania Railroad main line in the Turtle Creek Valley – east of Pittsburgh. Graduating from Wilmerding High School
in 1943, in the midst of World War II, he joined the U.S. Marines and was sent to Penn State, in anticipation of his call to active duty and basic training. He was able to become a valuable member of the Nittany Lion 1943 and !944 squads at just 155 pounds, before receiving orders to report to Parris Island, three games into the 1944 season.

He returned from the service after war’s end, and, realizing that Penn State had a huge reservoir of talent returning, enrolled and starred at Slippery Rock, getting his education degree in 1948. Hired as head coach at Pitcairn, a few miles down the railroad from Wilmerding, his teams struggled his first two years and then hit their stride. His success led him to the bigger Braddock High School where football was suffering.

Insisting on some needed new uniforms and field and locker-room improvements, he set to work. His first 1954 game was against WPIAL AA giant Wilkinsburg at Graham Field. Braddock upset the Holy City team winning 7-6 and never looked back. Undefeated and untied through the rest of that first season, the Tigers were held to a 7-7 tie in the WPIAL A championship game by Midland who scored on a broken play in the last three minutes.

Braddock was on its way, with consecutive years of unbeaten and untied dominance over the best their division had to offer. Home games were played at North Braddock Scott’s field where the Purple Raiders had a great tradition of their own and a long unbeaten streak in the 1930’s. Braddock finally joined with North Braddock and nearby Rankin to form General Braddock in 1971, before Woodland Hills was formed in 1987.

Halfback Joe Reaves scored 21 touchdowns in 1955 and received All-State honors. Derry Township was beaten for the 1955 WPIAL A crown. Braddock buried Carmichaels, 38-0, in the 1956 title game, and overcame tough Glassport in the 1957 game.

Late in the 1958 season, the four-time defending WPIAL champion Tigers were locked in a titanic game with Scott. Both teams were 8-0. Notre Dame’s team, set to play Pitt the next day and 9,000 others watched. Braddock win 9-6, the margin of victory coming from the toe of tackle Roland Mudd, his first field goal attempt.

Earlier that season, the Tigers had beaten Midland, 9-7, with a late 80 yard drive powered by John Gay and climaxed with a deceptive fourth down play where star quarterback Mark Rutkoski handed the ball to Ben Powell who dashed for the winning TD. The Leopards had been expecting Gay to get the ball again. Rutkoski, a three-year starter who led Braddock to three A titles, was named the MVP in the entire WPIAL after the season and selected on the Scholastic Magazine All-America team

Rutkoski’s 21 yard pass went to wide receiver Jimmy Hux and his dress gloves on the third play from scrimmage and Waynesburg went down 21-0 in the WPIAL championship game..

Then 1959 Tigers were a veteran team. The novice place kicker Mudd anchored the line at tackle. John Jacobs was the quarterback with Gay and Powell returning in the backfield. Jacobs, Gay and Powell all lived a few miles away in North Versailles Township which had no high school. They chose to attend Braddock and play for Chuck Klausing.

In the regular season finale, Braddock entered the final minute of the bitter rivalry game with unbeaten Scott behind 12-9. The Tigers had been pushed back to their own nine at one point in their final drive, but Ray Henderson caught a 26 yard TD pass from Jacobs with just 37 seconds remaining and the Tigers prevailed. Henderson, his wrists tightly taped – ala Raymond Berry – caught three passes for 61 yards in that drive.

During that historic season, Braddock passed the 49 game win streak of Abilene, Texas, and then set a record of their own, beating Canon-McMillan, for their 52nd straight win, eclipsing the 51 game run of Paul Brown’s Massillon Tigers. When the season ended with a 25-7 championship win over Waynesburg, Klausing’s Tigers had outscored the opposition 1,471 – 302 in the six amazing seasons.

Braddock and its 1959 team were featured in a four-page article in Sports Illustrated recognizing the Tiger program and its unprecedented unbeaten streak. The November 2 story was entitled “ A Town and its Team”.

Mudd was a first team All-Stater and Jacobs was named to the third team.

After the 1959 season concluded, Klausing was a much sought-after coach with huge accomplishments at the scholastic level. Four seasons were spent as an assistant at Rutgers and West Point, followed by six years as head coach at Indiana University of Pennsylvania. His 1968 IUP team narrowly lost to Delaware in the Boardwalk Bowl at Atlantic City. He worked as an assistant to Bobby Bowden at West Virginia for six years
and in 1976 became head coach at Carnegie Mellon where he won six Presidents Athletic Conference Championships and was twice NCAA Division III Coach of the Year. He retired – for a year – then joined the Pitt staff for another year – before closing out his long career with a successful stay at Kiski Prep. He coached his final Kiski team in 1993.

The book, Never Lost a Game ( Time Just Ran Out ) by Bob Fulton, with Chuck Klausing, has been a valuable source and reference in the preparation of this article.