It was definitely a game for the ages.  It was also a game of two distinctive and polar opposite halves.  For Peters Township, the last second victory was a bit of revenge in that they lost to Gateway by one point in the 2019 WPIAL 5A championship tilt.  The thing that makes this game so sweet for Peters Township and bitter for Gateway is the fact that the Gators held a 19-point lead and the momentum after one half of play.  In fact, the game appeared it may be heading toward the invoking of the Mercy Rule if things didn’t change in the second half.  But by now we all know things did turn around for the Indians and they advance to the championship game for the second year in a row.

The contest opened with Gateway winning the field position battle after each team punted.  By doing so they ended up scoring first on a Jayson Jenkins 40-yard field goal.  For most of the first half Gateway came out on top in the battle for field position.  They were able to pressure Logan Pfeuffer on many of his passes either sacking him, forcing him to scramble, or making him hurry his throws.  However, at times, his receivers couldn’t hang on to the ball. 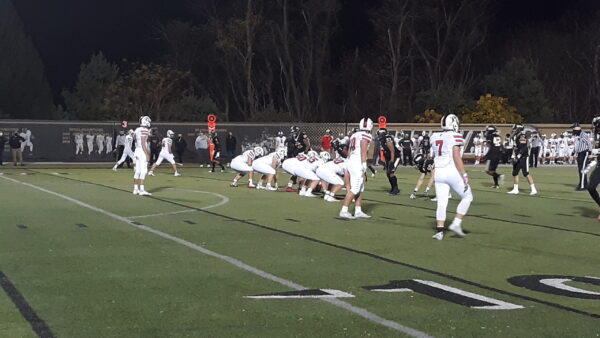 In the second quarter with Gateway leading 6-0, Pfeuffer went back to pass and the ball popped into the air as he started to throw.  Diego Bledsoe was at the perfect place to grab the ball out of mid-air and race 35 yards to put the home team up 13-0.  The sails seemed to really sag in PT’s ship when Jermir Harber picked off another Pfeuffer pass which led Gateway to score again right before halftime to go up 19-0.  Little did anyone know at the time, but the innocent miss of the extra point proved to be huge.  Conversely, the only saving grace for Peters Township was that they would receive the second half kick.  They would be back in the game if only they could score….

Engleka to Hurt and with 15 seconds left in half, Gateway lengthens their lead to 19-0 over Peter’s Twp. @PaFootballNews @GatewayGatorsFB @PetersTwpFB pic.twitter.com/9bWh5uO9fo

Coming out and using a little different offensive formation than their normal spread, the Indians marched easily and quickly down the field to score their first points of the game.  It was obvious that score, that spark, brought them to life and it was up to Gateway to snuff out that spark.  Gateway subsequently drove into Indian territory, but missed a field goal.

Seizing the elusive momentum and building on that spark, Peters scored again about halfway through the third on a 38-yard pass from Pfeuffer to Donovan McMillon who dove and caught the ball as he flew through the air parallel to the ground.  Now the score was 19-13 and we had a game!  Gateway tried very hard to put up another score to give them a little breathing room, but to no avail.  They would put together some short drives and made some key third down conversions, but they just couldn’t finish.  And ultimately, they never quite were able to extinguish that spark that the Indians had lit. 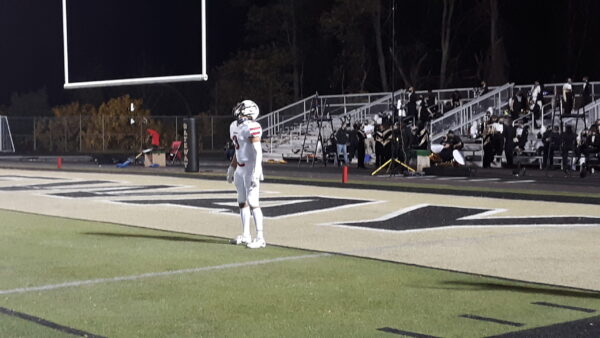 The Gators missed a field goal late in the fourth quarter and missed again when a penalty was called on the first attempt.  This gave Peters the ball at their 20 with about 3 minutes and 30 seconds left in someone’s season.  As the Indians drove down field, they ate up valuable time on the clock.  Facing a 4th down, Pfeuffer tried an out pass to get the yardage needed for a first down, but he was intercepted by Chamor Price who raced close to 80 yards for the Gateway touchdown and the game.  But wait a second!  A pass interference penalty negated the TD and gave Peters a first down.

As in the first half when nothing Peters Township did worked out, it was like that for Gateway in the second half.  Maybe worse because at least Gateway had a couple chances to score.  A few plays later with the ball at the Gator 4 and 8.9 seconds remaining on the clock, a timeout was called.  Peters discussed what to do and came up with a quick slant to tight end, Corbin Hondru, who plays the game hard and is a reliable kid.  A perfect pass and a nice catch and game over if the extra point is made.  Talk about pressure.  Andrew Massucci calmly nailed the kick and even though 4.7 seconds were left the game was over.

There are a couple quick stats to show, from the Indians’ perspective, how different the two halves were.  Peters had a grand total of 48 yards and 2 first downs on 28 plays in the first half.  Pfeuffer completed 13 passes for 239 yards and all 3 touchdowns in the second half.  Yes, this was a game for the ages if you are a Peters Township alumnus, but one you’d rather soon forget if you are a Gateway fan.  From a fan’s viewpoint that has no dog in the hunt, it was a memorable game to say the least.

Two final things to note.  First of all, the Gateway press box is definitely one of the best I’ve seen.  The press box manager was very helpful and was as nice as could be.  Secondly, Gateway has a very good band and it was a joy to see them play. 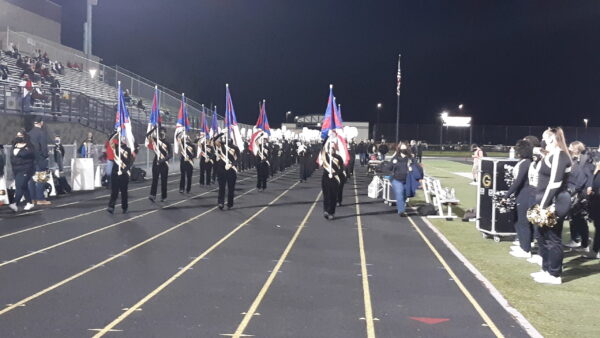