On Oct 16, the Freedom Bulldogs took on the Beaver Falls Tigers.

The Bulldogs started their drive running the ball, but couldn’t get anywhere. Because of this, they tried to take a shot and throw deep, but the ball was intercepted by the Tiger’s defense.

The Tigers took advantage of the good field position and ran the ball back into the end zone and made the score 12-0. Then went on and completed the two point conversion to make the score 14-0.

The Bulldogs got the ball back after the kick off, but once again tried to throw a deep ball on 1st down, but senior Cole Beck was intercepted.

On the ensuing Beaver Falls drive the Bulldogs defense came up with a huge stop and forced a turnover  on downs to get the ball back.

Freedom took the ball and got down to the 10 yard line. There, Cole Beck ran the ball into the end zone for Freedom’s first score of the night.

On the kick off, the Bulldogs went for the onside kick, but failed to get the ball. The Tigers took over on the 50 yard line. The Tigers took the ball down the field and scored on a rushing touchdown to make the score 22-7.

The Bulldogs , needing to score to get back into the game, and they did just that.  They answered back with a 4 yard touchdown reception to senior Brett Boyd. This made the score 22-14 and ended the half.

Coming out of the half, the Tigers started with the ball. They were unable to do anything on the drive though . The Bulldog’s drive was much of the same, and the Tigers got the ball back.

With just over 2 minutes left in the third quarter, the Tigers extended their lead once more with yet another rushing touchdown. They failed the 2 point conversion and the score was 36-14.

On the Bulldogs next drive, Cole Beck’s pass was batted and the Tigers intercepted it and ran down to the 1 yard line. They used this great field position and scored a rushing touchdown with one minute and 30 seconds left in the third quarter.

The Bulldogs were unable to do anything with their next drive and had to punt the ball.

The Tigers started the drive on their own 6 yard line, and on the first play of the drive they ran 96 yards into the end zone to make the score 50-14.

On the ensuing drive the Bulldogs tried to go deep but could not answer, and turned the ball over on downs.

The Tigers finished the game by running  out the clock and the final score was 50-14.

The Bulldogs will look to bounce back next week against the Mohawk Warriors on Oct. 23. 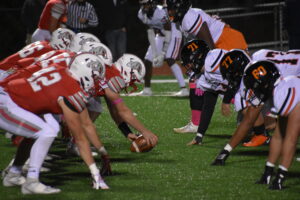 The Freedom Bulldogs and the Beaver Falls Tiger line up for the snap.