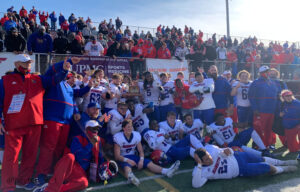 The Jeannette Jayhawks are your 2020 WPIAL 1A Champions!

When the two teams for the WPIAL 1A championship matchup was announced, not a lot of people thought that the Jeannette Jayhawks would not only claim victory over the Clairton Bears, but would make the victory look so easy. The final score from Martorelli Stadium was 45-14 to the Jayhawks and they would knock off the defending champions in the Bears.

The Jayhawks came out of the away locker room with the attitude of strictly business even though they would be defending first. On the first play of the game, senior running back Dontae Sanders fumbled the ball and then senior Toby Cline fell on the loose ball for his team.

Clairton, after just turning the ball over, was not too pleased about what happened, so they returned the favor. On a 4th and goal on the Bears’ 13-yard line, freshman quarterback Brad Birch was intercepted by senior defensive back Davion Rochelle to give Clairton the ball back.

The Bears took themselves to the Jayhawks 43-yard line, then senior quarterback Jonte Sanders was stripped of the ball and then sophomore Jaydin Canady controlled the ball and took it back for a defensive touchdown for the first points of the game.

Jeannette would not wait to strike as on their next drive, they put up more points. Birch and his Jayhawks found themselves at the Bears’ 19-yard line and that is where Birch took the ball himself for the touchdown. The point after was no good, leaving the score 13-0.

Clairton seemed a little rattled because when they stepped on the field again for the first play of a new drive, Jeannette senior Roberto Smith Jr. picked off Jonte Sanders to flip the possession again.

The Jayhawks capitalized off of Smith Jr.’s interception and went down the field and scored. This time, Birch found senior wide receiver Kaelan Piscar for the touchdown. Birch would run it in for the two-point conversion to make it 21-0.

To wrap up the first quarter, Clairton put some points on the board for themselves as junior Brooklyn Cannon ran it five yards for the touchdown. The point after was good to make it 21-7.

Clairton would get a defensive victory as they were able to hold off the Jeannette offensive for a drive. They forced a 4th and 17 and would punt it.  Unfortunately, Clairton would not get the offensive victory as they wanted. The keys to stopping the Bears, at least for this drive, was Canady and junior Taishaun Jamison who sacked Sanders for a combined loss of 13 yards. The Bears would be forced with no other option but to punt the ball away.

Jeannette took over at their 15-yard line and did not get very far as Birch was intercepted by senior defensive back Andre Henderson. Now Clairton was in a position to get some points on the board before halftime. They would run three plays before it was 4th and goal. Jonte Sanders would take the snap and scan the field. To his displeasure, a player that has caused him problems this game snagged the ball out of the air. The Jeannette sidelines went crazy when they found out that it was Jaydin Canady that came down with the ball to secure the score at 21-7 at the half.

The Jayhawks would start the last half of play strong, but not strong enough for a touchdown as Smith Sr. made good on a 29-yard field goal.

Clairton would be lifeless on their next drive and would punt it away, at least that is what they thought. The punt was blocked and returned for a touchdown by Canady to make it 32-7 in favor of Jeannette.

For the Bears’ next drive, it would end similar to their last drive, just without the blocked punt. They would get the punt away successfully.

The Jayhawks would get the last points of the quarter as Roberto Smith Jr. forced himself through the line of scrimmage for the one-yard touchdown.

To end the quarter, Jonte Sanders would throw another interception. It would be picked off by Smith Jr.  That interception would set up the last major play of the game for Jeannette as they converted on a 4th and 6 at the Bears’ 31-yard line. Smith Jr. found Piscar for the touchdown.

There was one player in particular that contributed in a big way for the Jayhawks and that was Roberto Smith Jr.  He played three positions: kicker, defensive back, and quarterback.  He went two out of three for points after touchdowns, he made one field goal, an interception, he stepped in at quarterback, and threw a touchdown pass. 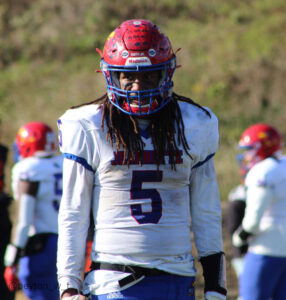 “Big time players have to step up and I feel I am a big time player.  I just put myself in a position to make plays and be a big part of this win.”

The action would not stop there as the Bears worked their way from their own 25-yard line to Jayhawks territory. Then, Clairton’s Jonte Sanders found Cannon for a 26-yard touchdown. The point after would be called good and that would end the game with a score of 45-14.

As the game clock hits zero, the Jeannette players, coaches, and fans all celebrated as they knock off the defending WPIAL champions. This is not the end of the road for the Jayhawks as they have punched their ticket to the PIAA semifinals against the Reynolds Raiders next week.