Will WPIAL coaches decide on major changes, or will conferences remain classification based 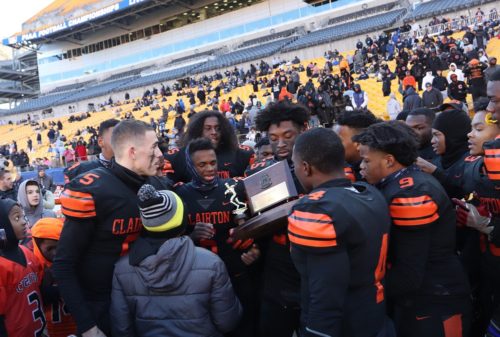 On Wednesday night the WPIAL held a meeting with it’s head coaches.  The goal: try to correct the conference alignments in such a way as to make everyone as happy as can be. “We sent a questionnaire out a while back asking what they’d like addressed” said incoming WPIAL Executive Director Amy Scheuneman. “Some of the issues they wanted corrected were travel and non conference games as well as trying to re-establish some rivalries. Of course some talked about what it would look like going back to four classes, some wanted to see what it would look like if we went to regional conferences so that’s what we presented.”

At the meeting the coaches were given two proposals.  Proposal 1 made several smaller changes to the current set up. All non conference games would be moved to the beginning of the season and the WPIAL would use the human element to decide who those opponents would be as opposed to having them generated randomly. “This would help us bring back some of the rivalries” said Scheuneman. “That was easy for us to do and it answers one of the issues people had.

Another of the issues that came up often was travel. “So yeah, that’s why they wanted to see the second proposal. They generally stated they wanted to see what it would look like with conferences having more than one class mixed in to reduce travel” said Scheuneman of proposal @ #2. “I don’t favor one over the other, however, option 1 does meet a lot more of the needs that people asked for. Everything is still up for editing.  These are not final and can be adjusted depending on which proposal they choose. Our football committee will meet next week to go over the results and make any changes that they feel are necessary.  Then from there it goes to the board for approval then schedules are made. The most important thing we want coaches to realize they need to accept the system and not the sections. Just because you like the section you see now, it may not look that was after the committee looks at it.”

Talking with some of the coaches, it seems to be a mixed bag of reaction. Franklin Regional head coach Greg Botta isn’t one of those in favor of mixing the classifications. “For me, we’d be playing,  as a lower tier 5A school, we’d have 4 strong 6A schools on our schedule to go along with some very tough 5A schools who lately have been the creme of the crop. That classification is very strong and with Pine-Richland moving down that makes 5A one of the best in the state.  I don’t think the parity is fair enough in that alignment.”

Crowd sizes are also a concern to Botta. ” I think they gotta try to establish more local rivalries. We’re traveling to five different counties right now. We’re three kids from the bottom of 5A so that setup doesn’t work for us. We scrimmage Norwin every year and that would be a good game for us. Plum is right next door, that would also help fill some of the stands. When you look around you see these “big” games and the crowds just aren’t there.”

Clairton head coach Wayne Wade is more in favor of the second proposal but would like to see the conference alignments changed. “I look at Bishop Guilfoyles schedule and they’re playing 2-3A teams and they’re battle tested when they hit the playoffs. I’d like to see us put in the conference with the teams like Aliquippa, Hopewell and Blackhawk. They have us right now in a conference with the teams that already don’t want to play us.Everyone keeps complaining about wanting us to play up. Mapletown, Jefferson Morgan, they already don’t want to play us so it makes sense for them to stay in a Tri county area with those teams. The only reason we don’t is because our numbers are low. We get a few kids hurt and we struggle but we still have to play the games. If we lose to a team like McKeesport or Aliquippa it doesn’t hurt us, we’re still going to go to the playoffs as a single A team but it helps us by teams are closer, fans don’t have to travel and we’re playing stronger teams to get that battle test.”

Thomas Jefferson Head Coach Bill Cherpak isn’t confident that proposal 2 will be voted in. “A lot of the talk was these teams out here don’t want to play the larger schools. Me, I don’t care. We’ll line up and play. It’s a big change. I do think focusing on local rivalries will help with crowd sizes, for us we drew big all year.”

One thing we discussed with each coach we talked to was how things go in the rest of the state. Berwick, a 4A team in District 2, plays in the Wyoming Valley conference. In their division they play 5A Abington Heights, 6A teams Williamsport, Wyoming Valley West, Wilkes Barre and Hazleton. Schuylkill Valley division 2 has teams from 1A through 4A, but at the end of the season they’ll head to the playoffs in their own classification. The same can be said in the center of the state where in the Mountain League you had 4A teams like Bellefonte and Clearfield, 3A Bald Eagle, Tyrone, Huntingdon and Central playing 2A Penns Valley. These conferences have been long established but due to geographical locations, this is what they have to do.

“Those teams in the center of the state, they’re used to that kind of set up” said Wade. “But again, because of that those smaller teams are battle tested. I can see where here in the WPIAL the larger teams might not like that because they don’t get the points playing smaller teams, but at the end of the day they’ll still make the playoffs.”  Botta also agreed with that outlook. “We, out here, we look at things the way they’ve always been. Maybe we should take a step back and look around the state and see what’s going on and how things work everywhere else.”

Wade is also a fan of the 6 classes, but sees the issue some may have. “In the upper classes like 6A, it’s a bit watered down but with the regional thing, those programs it helps. They’ll be playing teams that, back in 4A which is what some people want, they’d be playing anyway. I like it because our numbers are way low. In four classes, we’d be playing some stronger, bigger teams in the playoffs with no chance. Avonworth, Washington and some of the other 2A playoff teams, they’d be 1A and we would have a hard time advancing.”

Either way the coaches vote, one thing is sure. “At the end of the day we’re going to have six champions regardless of the proposal they choose” said Scheuneman. “That was another of their requests so we’re sticking to that. How we get there is just a matter of what they decide for the regular season.”