You’ve heard of the ‘three amigos.’  Well, Brookville’s three Ks (Jack Krug, Robert Keth, and Brayden Kunselman) accounted for all six of the Blue Raiders’ touchdowns in some manner and they piled up mucho yardage in Brookville’s conquest of the DuBois Beavers 42-28.  The game was played in Brookville before a smattering of fans estimated to be around 250.  “It was definitely different,” said Krug who is the Raider quarterback.  “It was a little awkward with less fans and no band,” echoed Keth who is one of Brookville’s wide receivers. 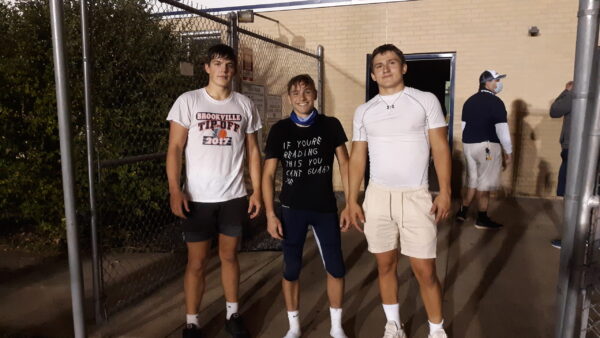 The home team scored first when they covered 77 yards in less than two minutes, capped off by Keth’s two-yard run.  A missed extra point by Brookville allowed DuBois to take their only lead of the night when Derraick Burkett returned the ensuing kickoff 83 yards for the Beaver touchdown on a dazzling run.  Nick Graeca’s first of four PATs gave the visitors the short-lived advantage of 7-6.

Brookville proceeded to drive 67 yards for their second TD.  A Krug to Braiden Davis pass covered the final 26 yards and the Raiders were back on top with a lead they never relinquished the rest of the night. Keth’s 2-point conversion put the Raiders up 14-7 with just under five minutes remaining in the first quarter.  To this point, Brookville had run 21 offensive plays and DuBois zero!

A nice punt by DuBois’ Dale Kot put Brookville’s offense in a hole at their own nine to begin their next possession.  Mixing passes and runs, the Raiders methodically drove the 91 yards, scoring on Keth’s second touchdown run of the night.  This time it was an eleven yarder.  Tacking on another two-pointer put Brookville up 22-7 early in the second.  “It felt great playing the sport I love to do, just a great time playing football,” Keth commented on the overall feel of the night.

The Blue Raiders forced another Beaver punt and were putting together another drive when a monster hit after a completed pass caused the Raider receiver to cough up the ball and change the momentum of the game at this point.  DuBois subsequently tallied to cut the lead to 22-14.  The touchdown came on Zach Henery’s three-yard run up the middle.

Brookville’s offense fizzled on the next drive due to an errant snap to the quarterback losing some 24 yards.  After the punt, DuBois began their drive in Brookville territory.  If they could score before the half and score after receiving the second half kick, they would retake the lead.  But Brookville thwarted that by forcing another Beaver punt.  This time it was the DuBois center whose snap sailed over the punter’s head and in doing so lost 32 yards.  At the DuBois fifteen is where the Raiders were in business with less than a minute to play.  Krug did not waste the opportunity to re-reverse the momentum.  On second down he found Kunselman for the touchdown and some breathing room for his team.  That put Brookville in front 28-14 heading into halftime.

A big key to the game was Brookville holding DuBois on their opening possession of the second half and then scoring to increase the lead to 36-14.  Krug passed to Keth for the TD and Keth ran in the two-point conversion to increase that lead to three scores.  DuBois answered and made the score 36-21 early in the fourth quarter on a Cam-Ron Hays two-yard run.

The Beavers immediately held Brookville, but in desperation, they gambled on 4th down deep in their own end and they came up short when Hays was sacked.  That set up the Raiders’ final score, an eighteen-yard throw from Krug to Kunselman.  “It’s awesome, you just throw them the ball and they make plays.  We moved the ball well and we can’t say enough about the line.  They gave us some good pushes.  It was a complete team effort,” stated Krug.  “Being able to connect on all those pass plays and being able to move the ball with the runs was real important to the team,” declared Kunselman.

DuBois rounded out the scoring on a Hays to Zach Shilala sixteen-yard TD toss at the 3:38 mark.  “DuBois is definitely improving,” noted Park after the game.  For DuBois, Cam-Ron Hays played a very nice game at quarterback.  He connected on 18 of his 27 passes for 183 yards and one TD.  He also rushed for a score.  Zach Shilala led the receivers with six catches, 70 yards, and a touchdown.  Henery was the leading ground gainer for DuBois and he scored once too

The three Ks had some gaudy stats though.  Krug was 25 for 38 in passing for 373 yards and 4 touchdowns.  Keth caught 5 passes for 91 yards and a TD.  He also rushed ten times for 51 yards and 2 touchdowns.  Kunselman snagged 8 passes for 82 yards and 2 tallies.  “We have six guys on offense that have been around a while and that’s going to show this year, hopefully.  The sky can be the limit if we stay healthy,” stated Park.  Coach Park was talking about Krug, Keth, Kyle Macbeth (who had 5 catches for 88 yards from his wide out spot and whose first name starts with a ‘K’), plus linemen Eliot Park, Nathan Taylor, and Wyatt Thrush.