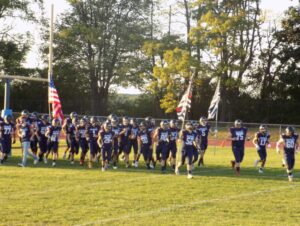 The Central Clarion Wildcats opened their inaugural season on Friday (September 11th), with a 42-6 win over Punxsutawney, at Clarion-Limestone Stadium .

With this being the first game (and first home game) in Central Clarion history, the game was loaded with program firsts that these Wildcat players will remember for the rest of their lives. I’ll mention many of them throughout this article. This may seem a little redundant, but I am hoping to emphasize the absolute history that took place on this night, which hopefully will be recorded for posterity.

The game was played with few fans (parents of seniors) due to pandemic restrictions, with the Clarion-Limestone staff doing an exceptional job in insuring social distancing and face coverings.

The C-L Marching Band and cheerleaders escorted the Cats who were led onto the field by standard bearers Hunter Craddock, Luca Cherico and Christian Simko bearing the Stars and Stripes, the Thin Blue Line flag (representing law enforcement officers) and the Thin Red Line flag (representing Firefighters/EMS/First Responders) respectively, commemorating Patriot Day, which occurs on September 11th of each year in memory of the memory of those killed in the attacks on that date in 2001.

Cherico coordinated the tribute, purchasing some PVC pipe for staffs and with the help of some local citizens, procured law enforcement and first responder flags, as well as recruiting his two friends and teammates to carry the flags.

The contest began with Central Clarion’s Beau Verdill kicking off, who promptly sent the ball to the endzone, for the first kickoff for touchback in team history. Six of seven of Verdill’s kickoffs went for touchbacks.

After a three and out, the Wildcats set up at their own forty-one. they lost six yards on a flare pass from Cal German to Ethan Burford, on the first play from scrimmage, pass and pass completion in team history (an inauspicious start, but just keep reading on to see what this duo did the rest of the way).

On second down, Cooper Shall electrified the stadium, taking a handoff, cutting to the left sideline and rambling sixty-five yards for the Wildcats’ first ever touchdown at 9:45 of the first. Verdill kicked the extra point giving Central a 7-0 lead.

Another touchback, another three and out for the Chucks. The Wildcats’ next drive started at their own forty-five and after two running plays, German hit Burford, in stride along the right sideline at the twenty-five, who took it the rest of the way for a 53 yard score at 7:25, the first touchdown through the air for the Central Clarion program. The point after was blocked and the Cats now had a 13-0 lead.

Punxy fielded the kickoff, but was stopped at their own sixteen. On the first play, quarterback Kameron Falgout, lining up in the shotgun, pulled down a high snap, took off down the middle, cut to the right and raced 84 yards for the Chucks only score. The kick failed and with 7:07 left in the first Central led 13-6.

Wildcat Jason Ganoe pulled in the program’s first interception, along the left sideline, beautifully making sure his feet came down in bounds, with 3:23 left in the quarter giving the Cats the ball at their own fourteen.

On the next play German hit Cutter Boggess on the left sideline, who used a nice stiff arm on a defender, before moving the ball to the Central thirty. Later Geman hit Burford on the right side for a twenty-two yard gain. And three plays later, Breckin Rex took a hand-off, went to the right sideline, and turned on the jets for a fifty-seven yard touchdown. Verdill’s kick was good and the Wildcats led 20-6, with 1:51 left in the first.

The Cats scored one more time in the half, with German hitting Simko, who got behind the defender on the left side of the endzone, with 1:47 left before halftime. Verdill’s kick was good giving Central a 27-6 lead.

(Photo by Kendra Craddock) Hunter Craddock with a tackle

With the half winding down,Hunter Craddock blocked a punt, again the first in team history, which Logan Lerch recovered. German hit Boggess with a pass over the middle as the clock hit zero, but several Punxy defenders stopped Boggess just short of the goal line.

The Clarion-Limestone Dance Team and Band had a fine halftime performances. The Drumline is really something.

With 5:06 left in the third, German hooked up with Burford on a sixty-five yard touchdown, which Burford who got behind the defender, hauled in at the thirty and ran in. German hit Boggess in the right side of the endzone for the program’s first two-point conversion and a 37-6 lead. The drive started after Shall intercepted a pass, at the two.

The scoring ended on the first play of the fourth quarter, when German hit Burford, who got passed the defense at the two and took it in for a forty yard touchdown. Verdill’s kick set the final at 42-6.

Great game for the Wildcats, with much history made!!

Cal German: Hooking up on the first TD in wildcat history is something special. We have been doing this together as kids and continue to bring it game in and game out. It was a great team win to get to 1-0 and we’re taking it game by game.

We are all looking forward to each weeks challenges and will continue to prepare for the next game this Friday night.

Beau Verdill: It feels good to play on the first Wildcat team and win our first game we just need to keep playing well and keep winning.

Ethan Burford: It was great to be back on the field this fall. It’s a little bit different with limited fans but i can’t complain because we are still playing football and that’s what matters. I think we played a solid game and I would like to credit Cal German for throwing some great passes. The first game is always where we can learn from the mistakes we make and perfect them so we can play the best football possible. We all love the new threads and we are all focused and ready to take on the rest of the season.

We ended up with a freshman at linebacker, when Kyle Bottarro went down. I thought he did a good job.

But overall, I was happy with our running game. There was a couple of times they broke through on some traps, but everything is fixable. We made some improvements from last week.

Offensively, some key penalties hurt us there at times. But when they’re on they’re on, connecting well. I thought we ran the ball well and threw the ball well. We just lacked consistency at times with some of the mistakes we made.

But again overall, those are things that are fixable. If  they are willing to come in and listen to me and the other coaches on Monday, telling them what they have to do to get better, they can be a pretty darn good football team this year.

But for the first outing, I’ll take the win, 7-6, 6-nothing, 1-nothing. A win is always a good start to any season. That sounds like a no-brainer; I’ve really pushed that over the years.

We have a lot to build on, some confidence things. Our corners played well. We missed some coverages at times, but my, my, Jason Ganoe on the outside; he just plays like an animal.

My staff did a nice job getting the kids prepared. A lot of things took place outside here, to distract you from the games. I thought our kids did a nice job staying focused, from the time we could actually begin practice, when we knew we were actually going to have a season on August 24th.