The Clearfield Bison has had a crazy season, just ask Coach Tim Janocko.  So, why would the D-9 AAA title game be any different?  The Bison used 2 pick sixes, 2 Oliver Billotte TD runs, and 2 field goals to aid their cause in defeating a very scrappy and determined St. Marys Flying Dutch team 41-30 Saturday afternoon at Frank Varischetti Stadium in Brockway.

“It’s been a crazy season.  We battled through so much you know two weeks of quarantine and lost two games we didn’t play.  We lost a heartbreaker down at Central, so we’ve been through a lot.  These kids are resilient and they played hard today and they played well.  A lot of kids made a lot of big plays,” were Coach Janocko’s initial thoughts after the game.

The game was entertaining from a fan’s perspective with plenty of big plays, but also included some very hard-hitting.  There were some missed opportunities especially for St. Marys that may have altered the course of the game.  But ultimately the Bison played more consistently on offense and got some key stops and a couple of scores from their defense to earn the ‘W’.

The first quarter was a see-saw battle and ended with the score deadlocked at 7.  Clearfield scored first on quarterback Oliver Billotte’s 5-yard run.  Graeson Graves connected on the first of five PATs and the Bison had drawn first blood.  That drive of 65 yards included an unusual play where Billotte scrambled for 11 yards, fumbled the ball when hit, and then teammate Jake Lezzer scooped up the ball and advanced it another 10 yards before being tackled.  St. Marys responded with a 65-yard drive of their own, culminating with a Christian Coudriet 20-yard TD pass to Bryce Walker.  Vinicius Nunes tied the game with the extra point. 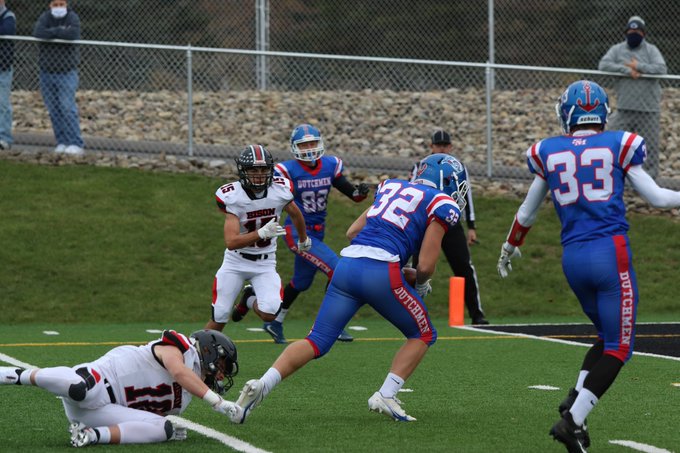 Clearfield took control of the game in the second stanza mainly as a result of a couple big plays that occurred in the latter part of the quarter.  At the 9:15 mark Graves booted a 23-yard field goal to give the Bison a lead they would not relinquish.  Billotte followed that up with a 14-yard touchdown on a quarterback draw putting the Bison up 17-7 with 5:28 remaining in the half.  On the next Flying Dutch series, less than a minute later, a Coudriet pass was picked off by Nate Natoli who made a beautiful one-handed catch, kept his balance and went 15 yards untouched for the score. 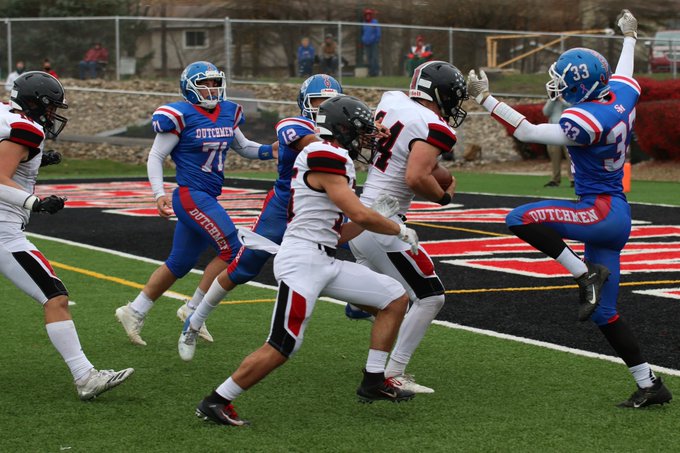 Clearfield’s Oliver Billotte scoring his 2nd TD of the day. 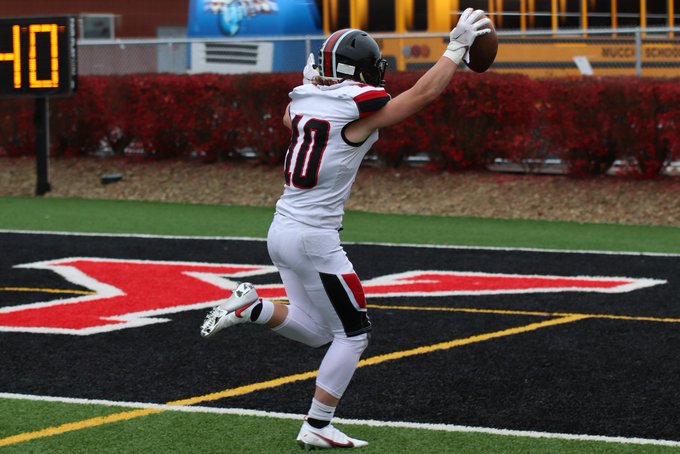 Nate Natoli scoring untouched off of a 15-yard INT.

St. Marys appeared undaunted though and drove 79 yards on 16 plays, but had to settle for a Nunes 24-yard field goal with 20 seconds left in the half to close the gap to 24-10.  Then the big play reared up and bit the Dutch, stopping the momentum they may have had heading into halftime and into the second half knowing they were going to receive the second half kick.

Coach Janocko related the thought process as to what happened next.  “Well, we thought that if we got out over the 40, we were going to take a crack if we got a decent return and we did.  Mark McGonigal got us a decent return.”  Actually, McGonigal returned the kick to the Bison 45.  From there, Billotte promptly hit a streaking Logan Firanski with a perfect pass and Firanski raced the rest of the way down the sideline to pay dirt increasing Clearfield’s lead to 31-10 with seven ticks left on the clock.  “Don’t know if they blew a coverage, but Logan has a lot of speed.  He got open and Oliver put it on him.  It was huge.  It put us up by three touchdowns going into halftime,” stated Janocko.

The third quarter turned out to be scoreless as Clearfield’s defense thwarted 2 Dutch drives deep into Bison territory.  The opening third quarter possession took St. Marys to the Clearfield 5 before Karson Kline intercepted a Coudriet pass at the goal line and returned it 40 yards.  The second saw the Flying Dutch get a first down at the Bison 21 before losing 10 yards in 3 plays and seeing a fourth down pass fall incomplete.  Offensively, for Clearfield, “we kind of sat on the ball, I’ll be honest with you.” Janocko said.  “We didn’t throw the ball as much in the second half,” he added. 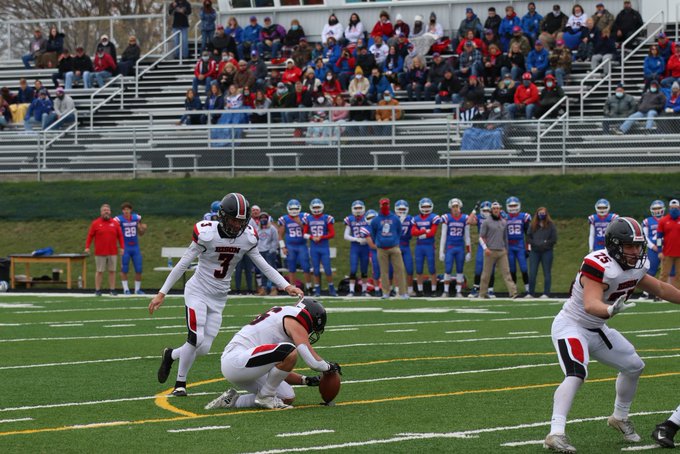 Graeson Graves kicking one of his two FGs on the day.

The fourth quarter was similar to the second in that 4 touchdowns were scored.  Graves’ second FG of the game, a 28 yarder, put Clearfield in command 34-10 at the 11:02 mark.  All four TDs came in the last 4:47 of the game.  St. Marys, who was the home team for the game, scored on a Coudriet to Logan Mosier 9-yard pass.  The two point try failed and the Dutch trailed 34-16.  A minute later St. Marys got the ball back, but a second down pass was picked by Shane Coudriet and returned 26 yards for Clearfield’s only touchdown of the second half. 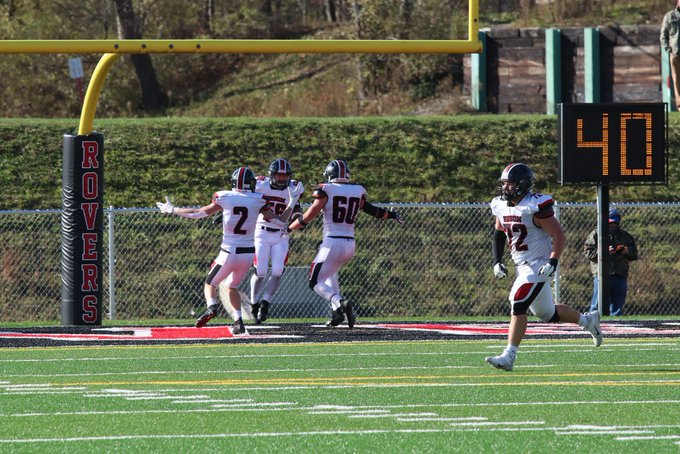 With the score was 41-16 and the game out of reach, St. Marys did not fold the tents.  Coudriet hit Walker for their second TD hook-up of the game, a 7-yard score.  Then after the Dutch recovered the onside kick, Coudriet found Mitchell Reiter for a 23-yard TD to set the final score at 41-30.  “That’s one of the few times I’ve seen kids keep battling,” said losing coach Chris Dworek.  “I mean it, I’m so proud of them.  I’m old.  I’ve coached a lot of games.  There’s been a lot of games the kids just quit.  It tells a lot about them as a person and how they’re going to live their life,” he continued.

St. Marys actually outgained Clearfield 440 yards to 299, but 178 of that came in the 4th quarter after Janocko had pulled a lot of the defensive starters.  Billotte ended the day by going 11 for 19 passing for 209 yards and the one big play TD.  He also rushed for a team high 41 yards scoring twice.  Clearfield had a 4th interception when Isaac Samsel, defensive lineman, grabbed a tipped pass out of the air in the second quarter.

Coudriet was 35 for 57 passing with 4 touchdowns and also 4 interceptions.  His passes went for a total of 320 yards.  Jake Cline ran for 128 yards on 20 carries for the Flying Dutch.  Reiter was the leading St. Marys receiver with 9 catches for 122 yards and a score.  Walker had 9 catches and 2 TDs, while Mosier chipped in with 8 snags and a TD.

All article photographs were taken by PFN’s Sykotyk.

« Young Rams run/pass by Red Devils @CCRedDevilFball @rhsfootball
We all know what happened to PSU yesterday, but where have we seen that game ending before? @AltoonaAthletic @cpmisch87 @PrepRamblers »