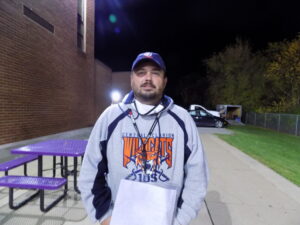 With approval of all three administrations and school boards (Clarion Area, North Clarion and Clarion-Limestone), Central Clarion Wildcats’ Assistant Football Coach and Offensive Coordinator, Dave Eggleton was hired by the Clarion Area administration and board as the new Head Coach, on Tuesday evening (January 12th).

Coach Eggleton, brings solid credentials to his new position. He was the Clarion-Limestone Head Coach from 2013-2018, where he had a 30-32 record, including 23-11 in his final three seasons (8-3 in 2016, 6-5 in 2017 and 9-3 in 2018). Clarion-Limestone joined Clarion Area and North Clarion in 2019 playing as the Clarion Area Bobcats, which this past season became the Wildcats. He served as Offensive Coordinator in each of those seasons.

Coach Eggleton takes over the program, from recently retired Head Coach Larry Wiser. Coach Wiser, a member of the Pennsylvania Scholastic Football Coaches Association (PSFCA) and Central Pennslvania Football Coaches Association (CPFCA) Halls of Fame, finished his thirty-two year head coaching career with a 238-105-1 (233-103-1 with Clarion Area and 5-2 with the Wildcats in their inaugural 2020 season). Coach Wiser holds the record for the most wins in Clarion Area and Little 7-12/Keystone Shortway Athletic Conference (KSAC) history.

Coach Wiser sent his well wishes along to Coach Eggleton. “I want to congratulate Davey on his selection as Wildcat Head Football Coach. I want also wish him and his staff continued success.”

About the new challenge, Coach Eggleton said, “I am excited to have the opportunity to lead this program. It is a combination of two great programs coming together and my goal is to continue to build upon that success. I feel blessed to coach such a great group of young men, and to coach with the tremendous staff that is in place. I want to express my gratitude to the Clarion Area Administration and school board for hiring me and the administrations and boards from North Clarion and Clarion-Limestone for the support of the co-op.”

And about the “Legend” he is succeeding, Coach Eggleton said, “I am very grateful for my time coaching with Coach Wiser. I learned a lot about what it takes to be a successful head coach from him.”

Clarion Area Superintendent Joe Carrico shared his excitement on the Wildcats new Head Coach, “We are very pleased to have Coach Eggleton leading our program.  He has been a part of the co op experience from its inception.  We are confident that Dave and his staff will continue the winning tradition that has been established for the Wildcats.”

Amy Glasl, Athletic Director at Clarion-Limestone had these fine words for Coach Eggleton, Congratulations Davey Eggleton on the honor of becoming the second head coach for the Central Clarion Bobcats! As I listened to you coach the team on the sidelines this past season, along with listening to the players speak highly of you as a coach in the Clarion-Limestone hallways, my desire for these young athletes was for YOU to be hired not only as their head coach to teach them the game of football but more importantly, to be their mentor teaching them life lessons to enable them to become successful young men.”

North Clarion Athletic Director Bonnie Wolbert shared these words of congratulations for Coach Eggleton, “Davey, You were a great head coach for Clarion-Limestone and played an even bigger role coaching the Wildcats made up of three different schools.  I couldn’t think of a better person to fill the head coaching position for 2021-2022.  Looking forward to working with you next season.”

Congratulations to Coach Eggleton, new Head Coach of the Central Clarion Wildcats!!!!, continued success to the team!!!! and enjoy your retirement Coach Wiser!!!!