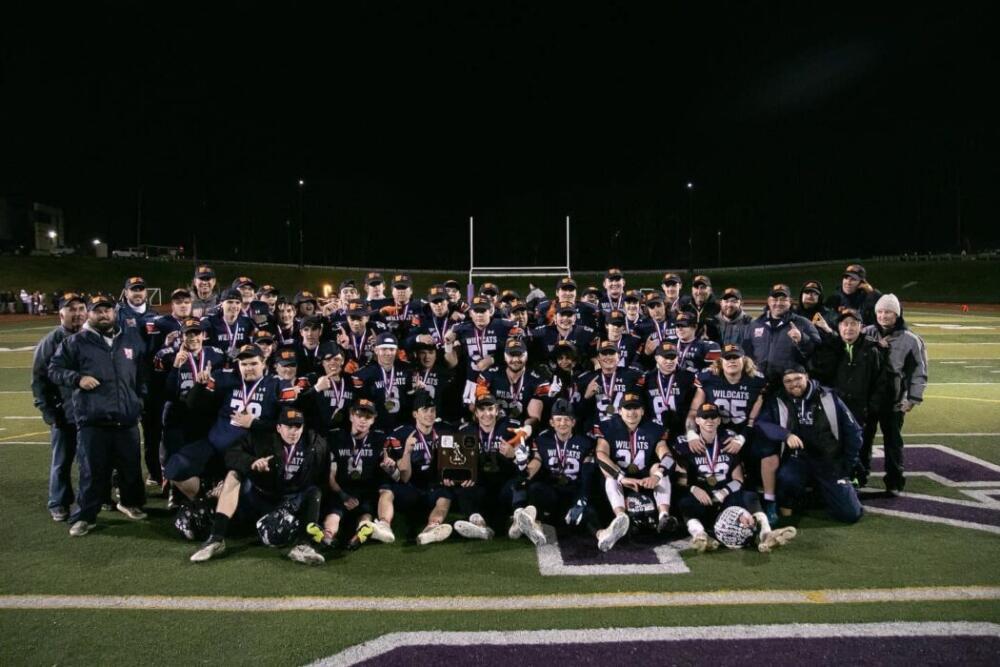 The Central Clarion Wildcats claimed the first District Nine title in the young program’s four year history on Saturday night (November 12th), with a 35-0 victory over the Brookville Raiders in the Class-AA championship, at Karns City’s Diehl Stadium.

The game was originally set for Penn West Clarion’s Memorial Stadium on Friday (November 11th), but was canceled due to weather concerns. With soccer playoffs at the stadium on Saturday, football was out. Hence the move to Karns City.

The Wildcats first score came at 10:20 of the first quarter, with Connor Kopnitsky taking the ball off left tackle and in from 5 yards out. Thomas Uckert’s point after was good and Central led 7-0.

Central Clarion quarterback Jase Ferguson hit Tommy Smith in the middle of the field, at about the Raider five yard line, with Smith taking it the rest of the way, for a fifty-seven yard touchdown, at 4:04 with 4:04 left in the quarter. Uckert’s extra point was true and the Wildcats led 14-0.

It looked like neither team was going to score in the second quarter, trading punts several times. But with 3:01 left, Ferguson hit Ashton Rex with a beautiful 76 yard run and catch for a touchdown. After securing the ball Rex had several good moves and then turned on the jets, running down the middle of the field outdistancing the defenders and into the endzone. With Uckert’s kick the Central lead was extended to 21-0.

The Wildcats scored once in each quarter in the second half.

Ryan Hummell had a one yard dive through the middle for a touchdown with 5:04 on the clock, in the third and Uckert good again. 28-0 Central.

The last score was set up by a long pass from Ferguson to Rex, setting the Wildcats up with a first and goal at the Raider five. Two plays later Kopnitsky ran through the middle from three yards out for the touchdown. Uckert was good with the extra point, as he was all night and Central led 35-0 with 9:33 left to set the final.

Ferguson completed 4 of 12 passes, for 187 yards, and 2 touchdowns. He had 14 carries for 73 yards. He had an interception on defense also. Rex had 2 catches for 103 yards and a touchdown. In a season of milestones and rewriting the Wildcat record books, both reached a significant milestone, on Friday. Ferguson passed the 2,500 single season passing yardage mark (currently at 2,638), while Rex went over 1,500 single season receiving yards (currently at 1,516).

Coach Dave Eggleton shared about the significance of winning this championship, “First Wildcat District title tonight. We talked about it during the week. I saw the videos of the Bobcats’ twenty-five years ago winning the district title. Actually twenty years ago, I was a player at C-L. We won the district title. It was just an amazing feeling. We talked about the legacy that’s going to leave for these guys, winning that first district title. It creates a bond that they’ll just always have together. They’ll get together twenty years from now and still talk about it. It’s just exciting. I’m so happy for them.”

The Central Clarion defense was pretty much “Lights Out” all game. “We came in, we didn’t sell out to the run or anything. We just played our base defense. We just basically wanted to make them drive the football. High school football, it’s hard to drive the football. We knew they weren’t really much of a throwing team now and we wanted to make them earn every yard they got. I thought we did that. We’ve got a fantastic defense, especially our run defense all year. It’s been great. They picked a great time to pick out the first goose egg of the year, in the district title game,” said Eggleton.

The extended season is great for the Wildcats. Eggleton said “It’s a special time. Any time you are playing this time of year, you’re getting extra experience. And we have a really young team too. Now is the third week of extra football. And that’ll pay dividends in the program going into the future.”

So the young program that has made great strides in just four seasons, will now face one of the state’s storied programs in the first round, the Westinghouse Bulldogs from District 8, the Pittsburgh City League. Their football program started over one-hundred years ago, beginning in 1919. The game is set for Friday night (November 18th) at George Cupples Stadium on East Carson Street on Pittsburgh’s South Side.

“House” may be a tall order, but Coach Eggleton is looking forward to the challenge. “So were excited to take a shot into the state playoffs next week. We got a really good football team, in Westinghouse that we are going to play. I think they are number one or two in the state, so we’re going to give them everything we’ve got.”

Praise for the Wildcats’ work ethic is worth repeating. “I’m just super happy for the kids. The end of last season. Didn’t see it go the way we wanted it. And they just worked so hard all off-season for this and it showed. The results this year showed. They earned everything we did tonight. So I’m just proud of them.”

(Congratulations on the first District Championship in program history, 2022 Wildcats!!!! Have a great game against Westinghouse!!!! Thanks to  Nate Girvan for their photos!!)