Last night I made another drive to Cincinnati, Ohio to watch the Falcons of Aiken battle league foe Shroder Paideia Academy Jaguars, at Withrow high school. For me, it was the first time catching A game at Tiger Field A nice little stadium that has cement seats all on one side of the stadium, call me strange but I like seating like that but to be honest I do not care for the seating on one side. Rosters come from hudl.com. so let’s all hope they are correct.

Ahmad Goss would block A Jaguars punt just 0:53 seconds into the game where his teammate Don’yae Freeman picked it up and raced downfield all the way to the 7-yard line. Three plays later Artis Hardy found Koraun Perdue for A 2-yard score. A two-point try was stopped when Jamale Tucker and Jeremy Belcher stopped Darrian Hall-Mackey keeping this A 6-0 game.

With 5:33 showing on the clock, Freeman would go 86-yards for another Aiken score. Freeman was running so smooth that he almost looked like he was in slow-motion, while he still left the defense yards behind him. Another failed two-point try was unsuccessful leaving this A 12-0 game.

Tavian Lewis would pick off A Donald “Bud” Taylor and take it 58-yards for another Aiken Score. Adekite Onanuga nailed the P.A.T. to make this A 19-0 score, with 1:15 left in the quarter. Mackey would gallop to A 38-yard run to get the Falcons offense going, with 10:31 left in the half. 25-yards were gained when Hardy found Perdue. Hardy raced to the Shroder 6-yard line to set up A Freeman 6-yard touchdown. Onanuga increased the Aiken lead to 26-0 with his P.A.T. with 6:54 left in the half.

Taylor was sacked by Shallum True causing the young quarterback to be helped off of the field. He would show A lot of grit and toughness as he would be back on the field A little later. Jeremy Belcher came in to play QB for the Jaguars and he was immediately sacked by Mackey. Things got worse for Shroder when they dropped back to punt only to have the kick hit their up man and was recovered by on the 11-yard run. This would become A  32-0 game when Hardy found Mackey from 14-yards out.

The Jaguars would show some offense right before the half ended with Belcher hitting Jamale Tucker for 20-yards. Aiken had totaled 185 yards on 22 plays, while Jaguars had gained 67-yards on 33 plays. Through the first half, the Falcons defense was as dominating as their offense. Shroder could never seem to find any tempo up to this point but the effort was not lacking.

The Falcons Montez T Trimble took the 2nd half kickoff from his own 20-yard line down to the Jaguars 28-yard line. The Jaguars defense would get A sack on Hardy when Kenneth Cephas and Chris Wilder combined to do the job. Hard would then be picked off by Cameron Brown to end any threat of another Falcons score.

The Aiken defense showed up on the ensuing drive with Isaiah Ware sacking Taylor and then Lewis got to Jamale Tucker for A loss of five after A swing patch. The defense capped things off with Freeman picking off Taylor.

Malachi Solomon would go 7-yards for the last Falcons touchdown and then the scoring ended when Hardy hit Lee Gaines for another 2-point conversion making this A 40-0 game.

With the running clock rushing the fourth quarter one play stuck out and that was Goss getting Jacob Harrison for A loss of seven. 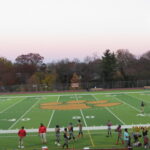 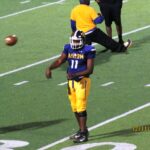 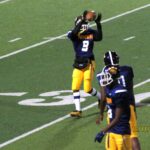 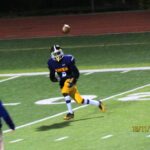 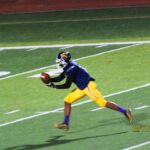 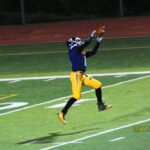 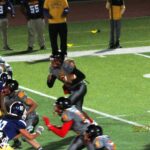 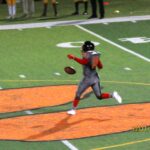 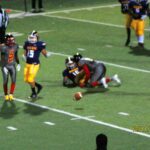 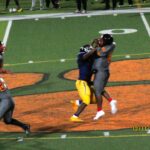 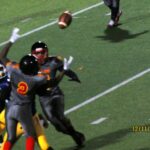 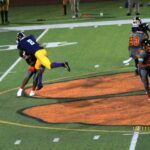