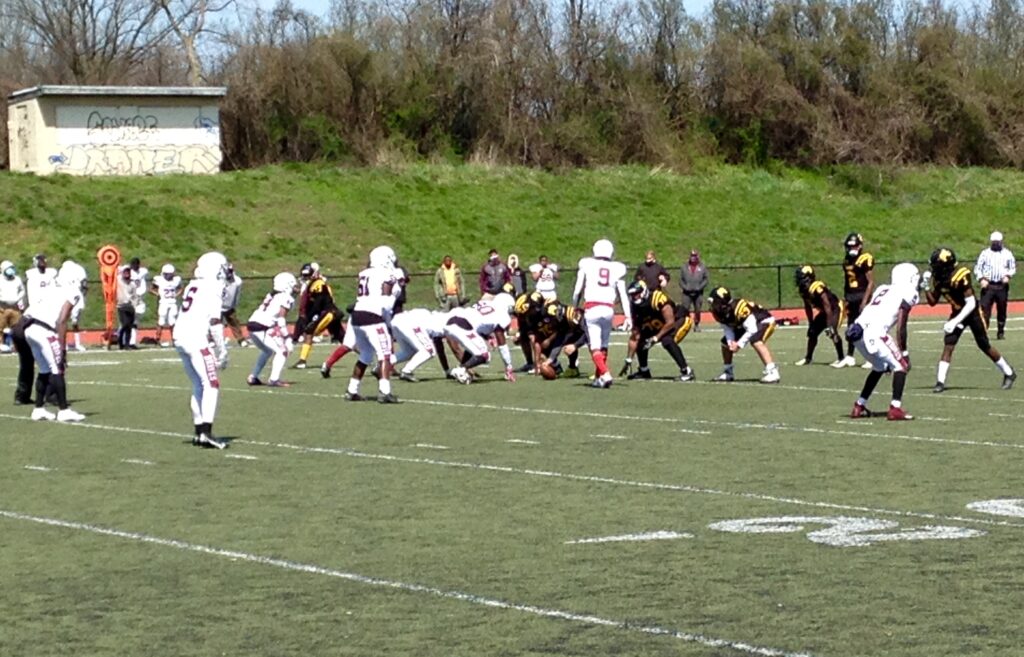 On a chilly afternoon at Lincoln High School, the John Bartram Braves relied on quick strikes from both the offense and defense in the first quarter to jumpstart a 28-26 victory and improve to 3-0 on the season.

On Lincoln’s first offensive play from scrimmage, Bartram linebacker Markel Morgan tracked down an overthrow and took it to the house to put the Braves up 14-0 just three minutes into the game.

“I saw that he overthrew the running back and was able to track it down and take it to the house,” Morgan said. “It was our preparation that put our defense in position.”

Down 14-0 early, it would have been easy for the Lincoln Railsplitters to bow out, but the resilience that had been part of their team all season showed up on the next possession.

Behind a run-heavy offense that had been missing for the first part of the Railsplitters season, Lincoln relied on the tough rush style of senior Ed Dualu. After back-to-back 15-yard runs, he punched it in for a touchdown, cutting the lead to 14-6.

“Our guys fought all game,” Coach Hakeem Cooper said. “We battled through adversity today. Usually, when teams go down by 14 to a good team like Bartram, you have your back against the wall, and you break down. But I’m just glad our guys held it together mentally and physically and made a great game out of it.”

As the first half went on, the Bartram quarterback continued to put up big numbers — over 150 yards passing, including a touchdown in the air and another on a QB keeper to extend the score to 28-14 heading into the half.

But in the third quarter, it was all about the defenses.

Bartram made a huge stop on 4th-and-goal, which was quickly followed up by a forced 3-and-out by Lincoln.

Two plays later, Braves Sincere Scott came up with was this time a big defensive interception. But not to be outdone, Lincoln defensive back Daniel Gardee made a play of his own, returning a Railsplitter interception for a touchdown to cut the Bartram lead to 28-20 at the end of the 3rd quarter.

The Railsplitters’ resilience would be a major factor in the 4th quarter, featured by an interception and touchdown return by Khavon Walker to close the gap to 28-26.

Another pick 6 for Lincoln! Bartram leads 28-26 in the 4th quarter. @pafootballnews pic.twitter.com/il2TGlvdil

At that point, it seemed like the Railsplitters might ride the momentum’s wave to victory, stuffing the Braves on its next possession.

As Lincoln moved the ball downfield with less than two minutes in the game, the Railsplitters looked poised to take the lead on a first down on the Braves 22 yard-line.

But a muffed snap on the next play ended any notion of a comeback. Bartram senior linebacker Kevin Brookins jumped on the ball, effectively ending the game after the offense kneeled four through the final possession, capping off a Braves 28-26 victory.

“It was nice for our boys to finish the job and get the win,” Coach Jim Chapman said. “But we have a lot to work on to keep getting better for the rest of the season.